From the moment they enter the garden, visitors are stakeholders in its layout. As if through a photo frame, they contemplate the mise-en-scène of a magnificent but out-of-reach floral collection.

Three plant varieties parade beneath the spotlights, proud of their powers of seduction. In procession, this trio of precious species emerge from a water mirror; their reflections expand the space around them and, as the seasons pass, create the illusion of a permanent aesthetic.
A rather more natural and spontaneous-looking ambience reigns once visitors make their way into the garden’s coulisses. Flowers bloom freely in their alcoves. Undulating flowerbeds, hazy and light as air, immerse walkers in an entrancing sideshow, bewitching them with their perfumes, their countless inflorescences holding them in thrall.
As in an Arabo-Andalusian patio, the pool becomes one of the garden’s structuring features, imbuing it with a soothing atmosphere conducive to quiet reflection.
It is through this contrast of architectural design dialoguing with wild nature that the garden’s creators have sought to express a form of harmony, borrowed from the art of gardens. This encounter exalts each flower’s elegance and vital power, as well as the fragility and transitory nature of flowering.
“Coulisses of Attraction”" is an invitation to ponder on the powers of seduction and appearances. It is with a measure of voluptuousness that confrontation with an elusive sophisticated world and a delicate, subtly vegetable world is brought into harmony. 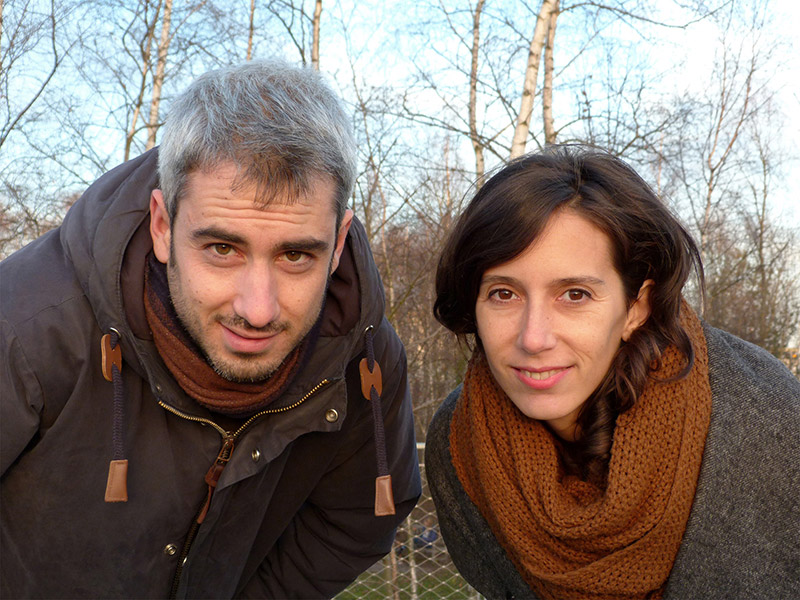 Adrien Ohlmann is a gardener/designer who first developed a passion for the world of gardens during his days as a vocational student. His career as a gardener has been peppered with discoveries of a wealth of unique, out-of-the-ordinary and prestigious places, taking in Château grounds, private townhouses and Parisian terraces, and including work at Château de Versailles and in two of Erik Borja’s Zen gardens. Requiring meticulous attention to detail and the utmost care, such experiences have served to confirm his vocation for the art of gardens. It was while he was attending classes on the history of gardens in Paris that he met Audrey Volpelier. He graduated from the Versailles National Higher School of Landscape Architecture in 2016 with a diploma in "Garden Design in the Landscape”. The course sharpened his eye, the sensitivity of his approach and his personal aesthetic: he designs by drawing, experimenting with volumes and textures, and trying out new plant associations adapted to their natural environments. He then went on to collaborate with Studio Niez on larger-scale missions whose design provided him with a garden vocabulary that he has made his own and a shared passion for the plant world. These days he works on his own behalf, still much attached to the soil, combining his creativity with his gardening skills in a variety of projects.

Audrey Volpelier is a park and garden designer. With thirteen years’ experience as project leader in High Environmental Quality (HEQ) architectural agencies to her credit, she has acquired major skills in the drafting and monitoring of publicly and privately commissioned projects. In 2013, she began to turn her attention to outdoor space in particular. This was a year of transition that saw her take part in participative self-construction projects, attend a course in permaculture and study botany and the history of gardens. Establishing the obvious connection between her passion for plant life, the living environment and the art of gardens, she decided to study “Garden Design in the Landscape” at Versailles National Higher School of Landscape Architecture, from which she graduated in June 2016. Her training there increased her taste for drawing while enabling her to explore new tools for relating to natural areas and their living components, and give thought to ways of transmitting emotions through her creations. Each of her gardens showcases a uniquely precious site, where she seeks to create a harmonious relationship between landscape, buildings and ecology. As a member of the “ESKIS Paysagistes” collective based in Montpellier, she experimented with this dialogue between reinvention of sites at human level and rehabilitation of historical gardens, drawing inspiration from her native Mediterranean region. Now working freelance, she seeks to unveil the intrinsic beauty of places and gardens in delicate intimist ambiences where she can express her sensibilities to the full.