Ticketing
For inspiration, this garden has delved deep into the poem A Cloud in Trousers by the futuristic playwright and poet Vladimir Mayakovsky (1893-1930), who challenges the reader to reflect on the fragility of existence, and into the work by Lazar Lissitzky, known as El Lissitzky (1890-1941), a painter and architect of the Russian avant-garde at the turn of the 20th century who, turning his back on aesthetic tradition, extols the modern world and a liberating aesthetic which upended the established hierarchies.
In a circle of black grass, a tree stands at the centre of the garden. Red blood vessels run down its trunk, along its branches and spill out into the grass – symbolising the cardiovascular system of a living organism. Red flowers pepper the black grass like drops of blood. Move closer to the tree, and you can even hear the heart beating. A red pathway encircles the tree, evoking the Soviet revolutionary past. The plants are a reminder of Mayakovsky’s tragic life, and the favourite colours of the Russian avant-garde artists.
Thanks to a soundtrack and the contrast between the red and the black, visitors are lulled into a moment’s introspection and thoughts about their role in the world.

Olga PODOLSKAYA, project author / industrial and interior designer, Margarita SYRTSOVA, policy Officer / founder and development director of Arteco Casa, and Olga CHERDANTSEVA, landscape architect and head curator of the gardens of the Russian Museum
With the support of the Russian Museum of Saint Petersburg
RUSSIA 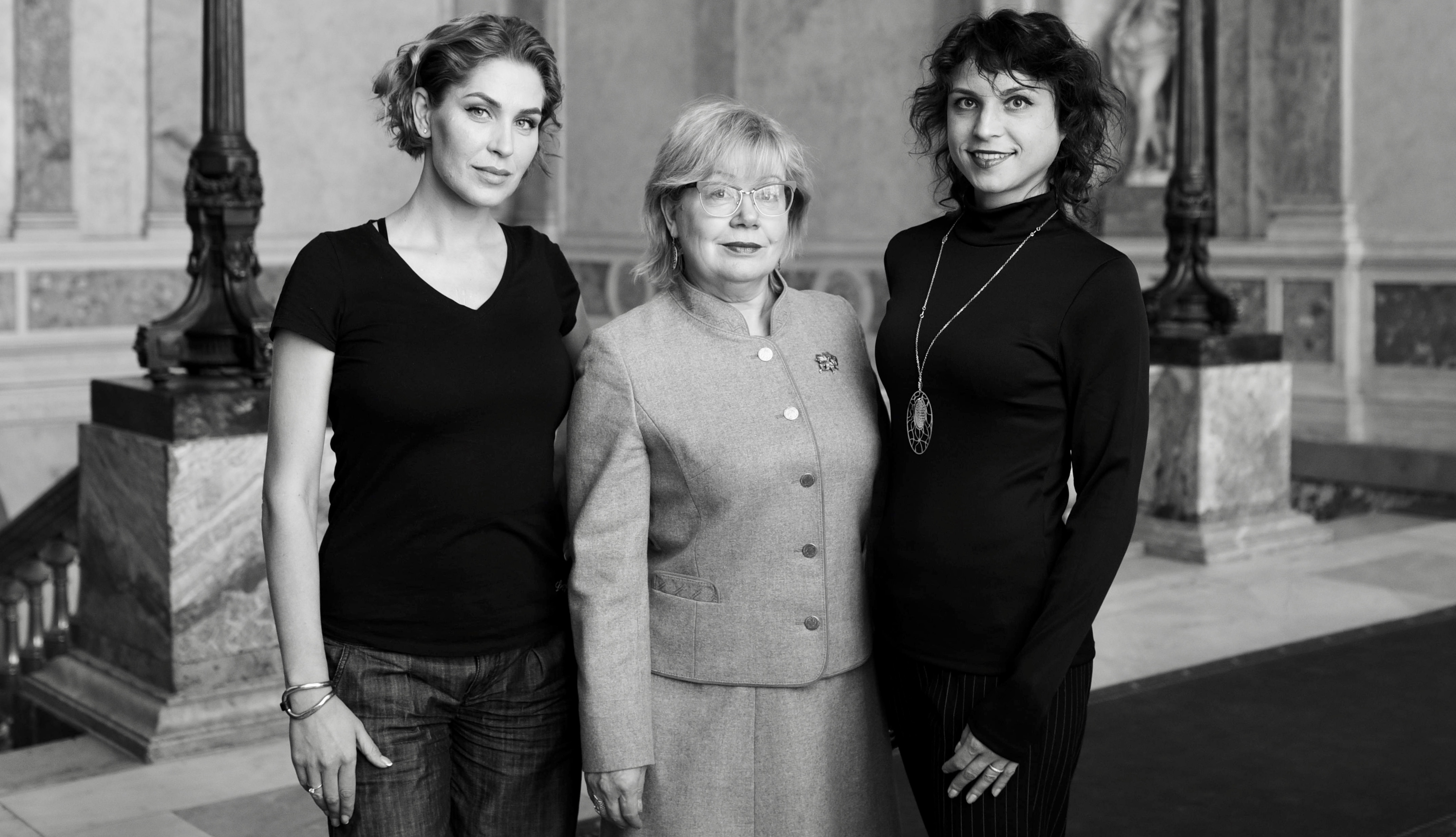 Margarita Syrtsova is director and founder of the “Representative Office of European Manufacturers of Interior Spaces”, a part of ARTECO CASA, an international agency specialising in brand management, advertising, marketing and public relations in the field of design. She is also the founder of the “ArtEcoWeek” design, art and ecology week and the Christmas charity fair “Design – Joyfully!” on behalf of the “BELA Children” Foundation (helping children suffering from bullous epidermolysis, a rare genetic disease), initiator of and lecturer for the “TIME OF WOMEN” coaching project, and teacher of her own “Presenting yourself and the project in English” class as part of the main Bachelor’s Degree programme at Saint Petersburg State University’s Design Department. In 2010, she obtained an international-level degree in graphic design from the Design Department of Saint Petersburg State University’s Arts faculty. She also graduated from the law and sociology additional educational programme delivered by Saint Petersburg State University’s Collège Universitaire Français (CUF), as well as obtaining an MBA in Marketing and Brand Management from Moscow International Higher Business School. She currently works in the field of interior design, collaborating with Russian and international companies. Her versatility and proficiency in foreign languages enable her to find original solutions when it comes to interaction between industries, creators and consumers. Since 2013, she has worked as a private consultant on Personal Branding. She created the MBS course on “Individual and Personalised Marketing in the Creative Industry”, and is a trainer at the Striges coaching agency. She lectures on Personal Branding to students at the Stiglitz National Academy of Art and Industry in Saint Petersburg, and is also a guest speaker at design conferences in Moscow and Saint Petersburg. Margarita believes that a brand is a living entity, able to find its own face and personality if it is the right hands. She believes in professionalism and the strength of human relations. She is of the opinion that anyone will be sure to reach their goal if they really want to. It is simply a matter of setting oneself a realistic objective. Helping people achieve what they want in the fields of business and communication, she “identifies” competitive advantages and turns them into assets.
Olga Cherdantseva is Chief Custodian of Saint Petersburg’s State Russian Museum gardens, and curator of the “Imperial Gardens of Russia” international festival held annually in the State Russian Museum’s gardens since 2008. She studied landscape architecture and garden design at Saint Petersburg’s Kirov State Forest Technical University’s Department of Green Space and Landscape Development, and at the Higher School of Landscape Architecture at the Architect House. She is a graduate of the presidential programme for preparation of management staff at the Russian Federation’s national economic organisations (efficient market management). She took part in the restoration of the Mikhailovsky Garden and the Mikhailovsky Castle garden, essential work that she sees as the main focus of her life between 2009 and 2012. As a member of the Saint Petersburg Association of Landscape Architects, she was awarded a Silver Medal “for gardening work”; as a member of the Russian Creative Union of Cultural Workers, she was awarded the Medal for Cultural and Artistic Merit at the 2017 Cultural Forum. In the context of exchanges of cultural landscapes, she has participated in State Russian Museum landscape projects at the Hampton Court Flower Show in the United Kingdom, the Chaumont-sur-Loire International Garden Festival in France, and the Tallinn Flower Show in Estonia. She has organised numerous events and operations in the State Russian Museum’s gardens, including the “Tree of Life” campaign, in which young trees are planted by representatives of the cultural, political and sporting elite – a campaign designed to replace dead trees. At her initiative, in the context of the “Tree-Monuments of Living Nature” Pan-Russian Federal Programme, “monument” status was accorded to the Summer Garden’s and Mikhailovsky Garden’s oldest oak trees. Thanks to her international contacts, the State Russian Museum’s Summer Garden has joined the European Garden Heritage Network (EGHN) and obtained the European Garden Prize for its restoration project.
Among other things, she has participated in the work of the Moscow Flower Show’s international jury, ADD AWARDS “Architecture, Design, Décor”, and Moscow’s International Jam Festival.
An internationally recognised industrial interior decorator. A graduate of Saint Petersburg’s International School of Design, with a second degree in Interior Design from Rhodec International School of Interior Design in London. Olga Podolskaya has 5 years’ practical experience in the field of design to her credit and has won many top Russian and international prizes.
Distinctions: Winner of the international “A' Design Award & Competition” for her lamp “Smile” (2017); Prize “for contribution to the development of Russian design” at the international ADD Awards (2016); Prize at the “Imperial Gardens of Russia” international festival for her installation “Discover the World” (2016); Prize at the “Imperial Gardens of Russia” international festival for her installation “The Heart of the Garden” (2017); Special Prize at the 2016 Moscow Flower Show for her installation “Discover the World”; Special Prize at the 2017 Moscow Flower Show for her installation “The Heart of the Garden”; Winner of the ADD Awards “Art Object” category for her “Discover the World” installation project; Pinwin competition finalist in the “Best Lighting Project” category for her “Artists’ Apartment” project and in the “Dream Bathroom” category for her “Silence” project.
2015
Creation of the first “Olga’s Furniture” collection, comprising console tables and chests of drawers;
2016
Transfer of the collection to the Moda factory (Italy) and production of a batch of samples;
AxoLight produces a prototype of the “Luna” lamp designed by Olga Podolskaya;
Olga develops kitchen designs for the Renaissance Kucine brand;
Olga signs a contract for production of a series of lamps with Zonca (Italy);
2017
In partnership with the ARTECO CASA agency, a collection of DECO ceramic tiles is launched: “Pavone” and “Glicine” series, created at the Ceramica Senio factory (Italy).
2018
Signature of a contract with the Italian factory for manufacture of “Laudarte” lamps, with a view to marketing a collection of fine-art lamps.
View on the map