Ticketing
For his garden at the heart of the Prés du Goualoup, Wang Shu has opted for simple materials: pine, climbing plants, a little pool of water. The structure he has dreamt up is made from interlinking pieces of wood – reminiscent of the skilful overlapping of birds’ nests. As it is upside-down, the fragile structure is gradually taken over by climbers growing at its sides – a net catching the clouds.
Inside the garden, the water surface ripples like a mirror and treats us to the poetic interplay of light and shadow, static wood and leaves fluttering in the wind. The clouds are reflected in this delicate pool and it delights us to imagine them caught up in the netting of the nest around us, which is also reflected.
Here we are able to enjoy a moment to rest and contemplate in the peace and quiet. We can give our imagination, thoughts and friendships free rein, accepting the invitation proffered to us, in the very name of the garden. Tingyun ting, “Pavilion of Lingering Clouds”, refers to a poem by Tao Yuanming entitled “Tingyun” – “The Lingering Clouds” – a vibrant song of praise to friendship. 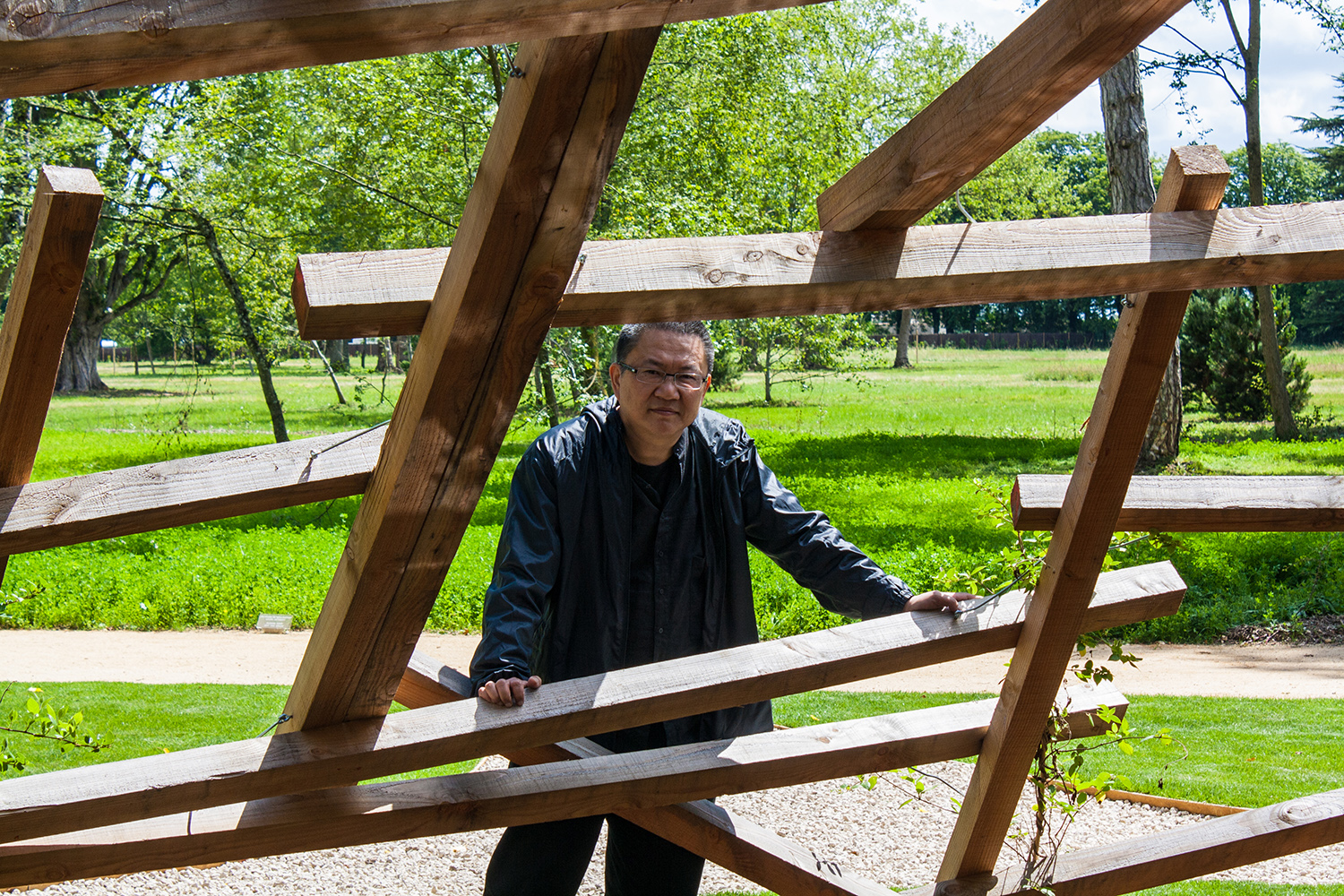 Wang Shu studied architecture at the University of the Southeast in Nanking, before being awarded a Doctorate of Architecture by Tongji University in Shanghai (2000). In 1998, along with his wife Lu Wenyu, he set up his agency, Amateur Architecture Studio, in Hangzhou, where he has also headed the Higher School of Fine Arts architecture department since 2003.

His projects have been disseminated throughout the world, in a wide range of journals and exhibitions (“Alors la Chine?” in 2003, “Positions” in 2008, and “Architecture as Resistance” in 2009), and have earned him a number of distinctions in China since 2003, as well as abroad, including the Global Award for Sustainable Architecture in 2007 and the Académie d’Architecture Gold Medal in 2011. He received in 2012 the prestigious Pritzker Prize for architecture.

After spending the 1990s in the field, learning traditional techniques from craftspeople, he carried out a number of projects, focusing largely on cultural facilities, in which he showed clear proof of a sensitive and poetic approach to traditional building know-how while employing a highly contemporary architectural vocabulary: the Wenzheng College library at Suzhou University (2000) with Tong Ming, the Contemporary Art Museum in Ningbo (2005), “Five Scattered Houses” in Ningbo (2006), “Tiles Garden” at the 10th Venice Biennale (2006), and “Ceramic House” in Jinhua Architecture Park (2007). As well as building techniques, he also seeks to reinterpret traditional forms and uses in his projects, in order to restore a continuity with tradition that has often fallen by the wayside in China: residential towers (2006) and renovation of Zhongshan street (2009) in Hangzhou, and the Tengtou-Ningbo Pavilion at the Shanghai Universal Exhibition (2010).
His projects show constant concern for relationships between edifice, landscape and nature. Wang Shu readily compares himself to a classical painter: the Higher School of Fine Arts Xiangshan campus in Hangzhou (2004-2007), and Ningbo History Museum (2008). The work he is currently supervising on rehabilitation of Zhoushan’s port wastelands, calling upon the help of other architects who have also won the Global Award, shows how much attention he pays to the site, its history, and the uses to which it was once put, as well as being a clear demonstration of his attachment to recycling.

An exemplary protagonist in China’s young architecture, Wang Shu shows us how, in a context so different from that of France, the quest for architectural, urban and landscaping quality is via rediscovery, understanding and superseding of tradition.

2010
Schelling Architecture Prize, Schelling Foundation, Karlsruhe, Germany
Special Mention at the Venice Biennale of Architecture 2010 to the "Decay of the Dome"