The ideal garden is that of a paradise lost, bygone days peopled with insects flying and hopping by the dozen, childhood days. A place of experiment, wonder and curiosity, and also a space for expression, giving free rein to the imagination, where crazy little tree houses are built. The ideal garden is a garden co-designed by humans and animals, an abundant, evolving garden highlighting biodiversity. Fauna, large and microscopic alike, can find refuge and thrive there. This ephemeral garden is an opportunity to rediscover the importance of insects and small animals, true under-gardeners, invisible helpers which accomplish great things. Life is by no means limited to the surface: valiant allies can also be found below ground. And isn’t it true that nymphs are not only mythological deities inhabiting mountains, rivers and forests, but also insects undergoing metamorphosis by moulting?
A flower-decked hillock at the entrance conceals the rest of the garden. Once visitors have made their way around it, they come upon a wooden ramp and have to squeeze their way along a narrow path, brushed by heavy, pendulous flower stalks as they pass. A violet blue monochrome dotted with red forms a constellation filled with flowers of all shapes and sizes. Grasses dance in the wind. The path follows the homogeneous curve of a natural pool, the garden’s centrepiece. It leads to a chrysalis, a snug little nest shaded by clusters of greenery. A pontoon extending just above the pool emerges from the flowery nebula, a perfect viewpoint from which to observe the dragonflies, butterflies, bees, amphibious and terrestrial reptiles, and feathered creatures that come to drink in this Eden. The hill-girdled garden’s heart brings all the runoff waters together. Behind it, the moor grasses and profusion of flowers gradually cover up the chrysalis, before making it disappear altogether, so reclosing the door to the Jardin des Nymphes. 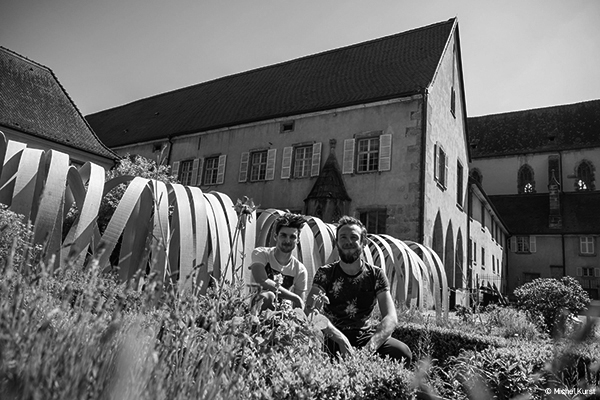 Atelier Biomes was established in 2019 by two landscape designers, Ambroise Jeanvoine and Johan Picorit. They seek above all to give major importance to ecological concerns in their projects, as they see them as being crucial to and inherent in the landscaper-designer’s profession. They are committed to highlighting, fostering and strengthening all ecosystemic relationships; it’s a matter of common sense! Nature does everything so well, why antagonise her? Understanding how she operates and immersing yourself in her, that’s the key to creating the landscapes of tomorrow’s world in all modesty. Their practice attaches great importance to the environment, fauna and flora, and natural dynamics. In this anthropocentric world, they like to speak of territorial actors who create landscape: everything merges, for the landscape is alive and made to be experienced. With Atelier Biomes, they enter garden festival competitions and apply for landscape artists’ residencies. Their participation in the 3rd edition of the Côte d’Azur Garden Festival was rewarded by obtainment of the Professional Jury Prize.

Johan Picorit is a landscape designer. After obtaining an Advanced Technician’s Certificate (BTS) in Landscaping and attending a class preparatory to enrolment in top landscape design schools, he graduated from the Versailles National Higher School of Landscape in 2018. He completed his course with a degree specialising in coastal problematics, positioning himself on acceptance of natural features. He started off his career working for the Versailles National Higher School of Landscape and carried out an initial mission on the same questions. He then took his mind and body travelling for eight months, via site visits in French Guiana where he got to know the context of tropical landscapes. In October 2019, he joined the Ateliers 2/3/4/ architecture, landscaping and urban planning agency, while continuing to work on Guianan projects and increase his knowledge of tropical environments. In September 2021, he also went to work there for 6 months. Yet he grew up a long way from French Guiana, surrounded by greenery in the Vendée countryside, where he developed an interest in drawing very early on in his life and his boundless curiosity led him to observe fauna and small insects. A longstanding interest that has led him to keep an attentive, benevolent eye on them even today.

Ambroise Jeanvoine is a landscape designer. After taking a degree in biology, an Advanced Technician’s Certificate (BTS) in Landscaping and a vocational degree, and attending a class preparatory to enrolment in top landscape design schools, he graduated from the Lille National Higher School of Landscape in 2019. He completed his three student years with a degree on estuarine resilience and started on a six-month internship at Atelier Roberta (Paris) in October, co-founding Atelier Biomes along the way. After a childhood marked by constant relocations, he finally settled in Franche-Comté, almost 15 years ago now, returning to his family origins. For him, mountains and forests are great sources of inspiration and relaxation alike. Currently project manager at the TNplus paysagistes in Paris, he is responsible for development of central gardens in housing blocks and two future parks in Rouen and Toulouse. He has had a passion for botany since early childhood. “At nursery school my daily ritual was to go and gaze at the rose bed in the schoolyard. Then came the string of pots in which I planted the seeds given by my grannies and those I collected myself! I still have the same love of botany and continue to promote biodiversity.” It’s a passion that was handed down to him by his grandmothers, who came from the farming world, and which he now has the opportunity to share.