le bois des chambres
Ticketing
As if they had been led astray on their own land, strangers to the games nature plays, do human beings not seek to craft an agreement between themselves and the world through their gardens? Gardens are the fruit of a dialogue between opposing forces, utopias made manifest. They create harmonies, tensions, continuities and ruptures between human order and world order.
This garden’s apparently chaotic topography follows an underground logic, while its orthogonal layout is thrown out of kilter by the seemingly haphazard distribution of the plant life it contains. Everything combines with and contradicts everything else. Harmony, yes, but strange. It’s there, in the intangible intervals between the contraries this ideal garden highlights.
But an ideal is also a dream, unreal and inaccessible. When they enter the garden, visitors leave the real world behind and make their way into a painting. The vibrant muted colours and the fragrances of medicinal, edible and aromatic plants turn what might have been an agricultural landscape into a dream. 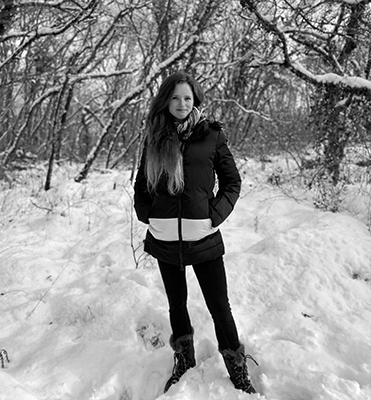 Jeanne Lafon is a landscaper with a degree from the Versailles National Higher School of Landscape. She takes a crosscutting approach to landscapes and the art of gardens, combining an artistic eye with scientific research. She was a resident at the National Studio of Contemporary Arts in 2011 and 2012, following which she completed a PhD in Urban Planning and Development in the field of sensory environments. She has taught Landscape Theory and Project since 2013, and takes part in research programmes at various schools and universities in France and Canada, while developing her own activities as an artist and landscaper-designer. She is particularly interested in the aesthetic, philosophical and perceptual relationships that human beings maintain with their environment. Influenced by Eastern philosophies, she explores intervals, voids, whatever escapes definition and certainty in landscapes and territories: dream, impermanence, emptiness, contradictions, inaction, and experiences of the sublime and transcendence.
View on the map