Ticketing
If an ideal is a dream that has become reality, then the ideal garden can bring to life an Italian fresco in Villa Livia’s underground nymphaeum, at the gates of Rome. A trompe-l’oeil painting created for the Emperor Augustus’ third wife, this Roman fresco aimed to do nothing less than bring natural light and plant life into a windowless chamber set beneath a barrel-vaulted ceiling in the heart of the residence.
Discovered in 1863, this anonymous fresco, painted between 40 and 20 BC, may not have finished revealing its secrets…
It depicts a life-sized garden containing a wide range of plant life. Brightly coloured trees, shrubs, flowers and fruits succeed one another in linear fashion, giving the impression of a landscape stretching into infinity.
Perspective is created by inclusion of scenic features borrowed from the theatre. A wickerwork palisade marks off the foreground, echoed by a marble balustrade in the middle ground. Beyond the proliferation of greenery, the background closes on the canvas of the skies.
Here, every possible pictorial artifice is applied to the layout of a real garden, with the aim of reproducing the harmony depicted in this ancient painting, the archetypal atmosphere of a universal garden beyond the reach of time, present in the hearts and minds of each and every one of us.
Visitors abandon themselves to the landscape as they would to a theatrical performance.
De la nature is a “tableau vivant” – a living picture. 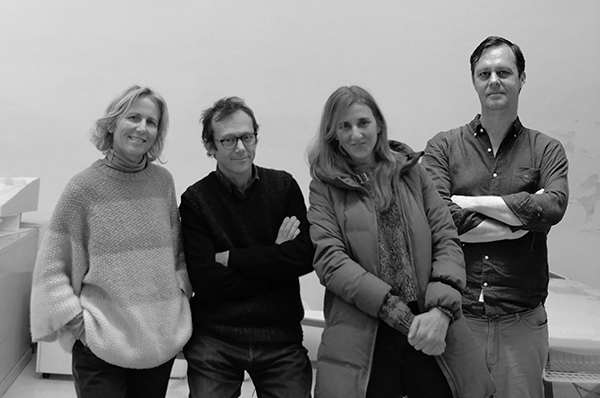 Carlotta Montefoschi, Niccolò Cau, Ricardo Walker Campos and Maria Cecilia Villanis Ziani have been working and creating together at Studio Spin for some twenty years now. Combining their various professional skills, they devote themselves to projects whose common denominator is the relationship between natural environment and built environment. Their work, which is based on long experience in the field of gardens and private homes, has recently focused on projects for public spaces. Their main creations for Garden Festivals are as follows: “The Garden of Solitude” (2021) and “The Gallery of Mirrors” (2015) at the RHS Hampton Court Palace Flower Show, United Kingdom; “Le Domaine de Narcisse” (2014) and “Le Rêve de Pantagruel” (2010) at the International Garden Festival, Chaumont-sur-Loire, France; “Questa non è una collana...” (2009) “Premio Leonardo” at Parco Ferrari, Modena, Italy; and “A Walk through a Poncho” (2002) at the International Festival of the Garden, Westonbirt Arboretum, United Kingdom.Giulia Tasselli has been collaborating with Studio Spin for about a year.

Carlotta Montefoschi (Rome, 1971), architect, practices her profession in Rome. She graduated from the Sapienza University of Rome with a thesis entitled “Progetto di recupero e di ristrutturazione della ex fattoria di Grottarossa- Roma” (Project for rehabilitation and restructuring of the former farm in Grottarossa - Rome), in which she broached the theme of the relationship between historical architecture, transformation of the urban landscape, and the countryside around Rome. She founded SPIN with Niccolò Cau in 2007, participating in various design competitions on themes connected with landscape and public space and winning several prizes. Her current research focuses on landscape design and she has strengthened her ties with some of the largest companies in Italy’s horticultural sector, with which she works in the private and public sectors alike. Her achievements include the landscape design of the Roman Forum’s new entrance for the Archaeological Park of the Colosseum, and landscape design of the former Druso Barracks area for the municipality of Silandro (Bolzano - Italy). She has been entrusted with the choice of green spaces for the Ennismore Chain’s Hoxton Hotel in Rome.

Niccolò Cau (Rome, 1970), architect, studied at the Sapienza University of Rome and obtained his degree with a thesis entitled “Progetto di un edificio per congressi ed esposizioni a Pietralata-Roma” (Design of a building for conventions and exhibitions in Pietralata-Rome), in which he tackled the relationship between architecture, nature and urban landscape. He started off his career by working as a teacher and researcher at the Architecture Faculty’s Design and Construction Laboratories at the University of Rome III. After a period collaborating with various professional organisations, he set up as a freelance architect in Chile. He founded SPIN with Carlotta Montefoschi in 2007, participating in various design competitions on themes connected with landscape and public space and winning several prizes. He currently practices his profession between Italy and Chile, with projects for private homes that also include design of green spaces. In the public sector, the Archaeological Park of the Colosseum recently entrusted him with the architectural design of the new entrance to the Roman Forum.

Ricardo Walker Campos (Santiago de Chile, 1968) studied architecture at the Catholic University of Chile and art at the Institute of Contemporary Art, both in Santiago de Chile. He founded the Los Boldos nursery in Panguipulli, in Chile’s Valdivia Province, in 1993, since when he has been carrying out research on ornamental use of southern Latin America’s native flora. He obtained a degree in landscaping from the John Brookes School of Garden Design In 1998. Over the years, he has created numerous gardens up and down Chile, from the coast north of Santiago to the lakes of Patagonia. He joined SPIN in 2007, participating in various design competitions on themes connected with landscape and public space and winning several prizes. In addition to his work as a green space designer, he has recently extended the Los Boldos nursery’s production to species from Chile’s northernmost regions.

Giulia Tasselli (Rome, 1983) holds a Master’s in Engineering from the Sapienza University of Rome. Since 2015, however, she has been busy designing and creating green spaces, a true labour of love. Following obtainment of a degree in landscaping at the Quasar Design Institute, she has taken part in a variety of competitions, including the Festival del Verde e del Paesaggio at the Auditorium di Roma in 2016 and the Chaumont-sur-Loire International Garden Festival in 2017, as well as numerous private a public projects.