The lotus, or water lily, is an aquatic species that originates from Southern Asia. Its roots grow in the muddy soil of riverbeds or ponds, in places where the current is not too strong. In Eastern culture, this plant is considered a symbol of purity, because even though lotus flowers emerge from muddy habitats, they remain dry, smooth and glossy. Botanists have studied this phenomenon and noted that the flowers and leaves of these plants have a natural cleaning mechanism: they are completely waterproof. We speak of the “lotus effect”. This hydrophobia is possible thanks to the structure of the leaf’s surface, which is covered in microscopic wax crystals. They form tiny points meaning that water is not absorbed. When the droplets cannot attach to the surface, they slide off the leaf and take with them anything in their way (mud, small insects, etc.). This mechanism is what gives the leaves their shiny, clean and dry appearance. It is almost hypnotic to watch. The droplets seem to dance around each other, coming together and drifting apart in an endless rolling movement.

The garden will take visitors right to the heart of this phenomenon, in an Asian-style setting that is both authentic and extravagant. There is an expanse of water full of lotus flowers, followed by a pond covered with one giant leaf. Spherical shapes that resemble large droplets of water top off this recreation of the Lotus effect. 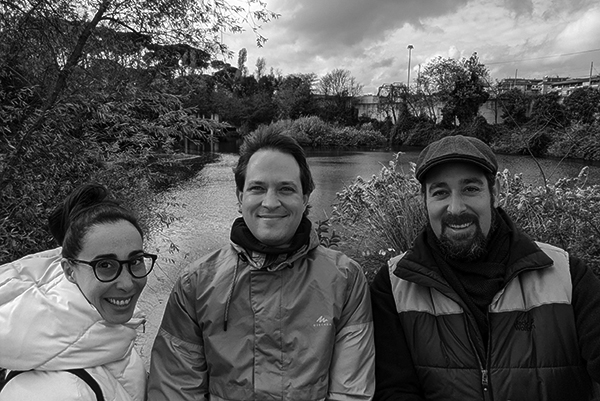 Ermelinda Cosenza, Antal Nagy and Aurelio Valentini are the founders of a project of multidisciplinary collaborations in the field of ornamental green, called STUDIO EXTRAMOENIA, born in 2013, with the first participation at the “Festival del Verde e del Paesaggio” in Rome that same year, presenting an installation called “Gira che ti rigira” and which earned him a special mention from the jury. Starting from that first shared experience, they dealt together, also experimenting it from various angles, on the vast theme relating to the design and management of greenery, measuring themselves with projects that ranged from outdoor furnishing accessories, passing through numerous gardens and private parks, up to the management of greenery in private villas and historic parks.

Ermelinda Cosenza is graduated from the University of Rome La Sapienza in 2012. Her research proposal for her degree thesis was a project for landscape recovery in Gorky Park, in Moscow, within European project RKM (Rome Kiev Moscow - save urban heritage). During his Landscape Architecture studies, she acquired skills in the drafting of Landscape Plans, restoration of historic gardens and design of public parks and gardens. In the years, she has put her experience into practice by collaborating with several architects and architectural firms, at the same time experimenting in the architectural composition in the garden design, creating installations during the major Italian events.

Antal Nagy is graduated in Furniture Product Design from the Europe Institute of Design in Rome in 2002. A title that will lead him to train as a designer at the B.F.G.F. studios in Hamburg (Germany) and at the D’Arrigo Design studios in Rome (Italy). At the same time, he develops a great interest in the plant world, first starting to attend thematic courses at the Parco di Veio institution, and then moving on to the first level degree course in Garden Architecture and Landscaping and to the master's degree course in Landscape Architecture then, graduating in Rome at the University of La Sapienza in 2017 and positively taking the entrance exam to gain professional access to the College of Agricultural Technicians. The love and admiration for plants and gardens have accompanied him constantly for at least 10 years, through a continuous path of research in this complex and fascinating world.

Aurelio Valentini, freelance agrotechnical garden designer with a degree in Garden Architecture and Landscaping at the La Sapienza University of Rome. As a freelancer, gardening expert and garden designer he collaborates with various companies in the sector and nurseries. He oversaw the management of several historical parks and gardens including those of the park and naturalistic oasis of the Tenuta del Porto di Traiano in Fiumicino (Rome) and collaborated with the phytosanitary management of the Landriana Gardens of Tor San Lorenzo (Rome) the UNESCO sites of Villa d'Este and Villa Adriana in Tivoli. He is director, secretary with delegated powers to the Urban Green at the College of Agricultural Technicians Graduates of Rome Rieti and Viterbo. Designated representative to the Urban Green Council of the National College, coordinator of the proposal of the amendments to the Green and Landscape Regulations of Roma Capitale. He is an expert lecturer with the following positions: annual garden architecture course and metropolitan gardening hobby course Quasar Design University of Rome.