Nature has reproduced mysterious cycles since the dawn of time. In order to pursue our evolution in harmony with it, we must understand how these cycles were observed and interpreted in ancient times. The Delphic Oracle in ancient Greece was considered to be the navel of the earth. It was dedicated to Gaia, mother goddess of all the gods, goddess of the Earth and the Earth itself. A ruined circular wall recalls the remains of this mythical site where the gods responded justly to difficult questions about the future. Following an imaginary line between the winter and summer solstices, a rivulet passes through the garden like a life line, from its bubbling source to its return under ground. Between the collapsing stones, a semi-circular opening allows visitors to pass through. In this sacred space, vegetation covers the ground and the ruins. Young birch trees and grasses grow among other pioneer species; mosses and plants that grow on wastelands, verges, railway tracks and in other places without gardeners; trees and ornamental perennials. Mother earth seems to have replanted her garden herself. The idea of an ecosystem that, in time, will regain its independence is very appealing. The result is a landscape that is colourful and verdant. 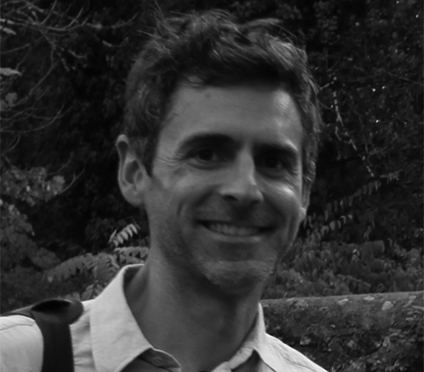 “I have worked in gardens since 1994. Born in the United States, I gained a bachelor's degree in Plant and Soil Science in 1999, with a focus on ornamental horticulture from the University of Delaware. Just after graduating, I was hired by Longwood Gardens, a vast botanical garden close to Philadelphia, which welcomes more than a million and a half visitors each year. My true passion for gardens grew here as I was able to take on a variety of responsibilities during my years in the outdoor gardens. For several years, I also designed and maintained the patio gardens by the main entrance of Longwood Gardens. After 15 years at Longwood, I moved to France, to the Loire Valley. In 2015, I was hired as botanical director at the Château de Chenonceau, where I spent three years before embarking on another adventure by starting my own garden design business. I am still responsible for choosing plants and designs at Chenonceau, including the garden in homage of Russell Page that opened in 2018. My approach is to create gardens adapted to the climate that visually create emotions whilst maintaining the spirit of the location. My priority is to design gardens with abundant vegetation that inspire us to spend time in them. The aim is to create sustainable gardens that inspire emotions and are inspired by natural landscapes.”