This garden tells the virtuous tale of farming techniques that are not only age-old but also rich with promise for the future.

Renowned for its cunning and intelligence, the hare must find solutions to the problems of global warming. It must provide for the population's needs in terms of food and water. Under the tree of neverending discussions, it will make encounters that will change the course of its future.

The old initiates once said: "If you want to safeguard knowledge and make it travel through time, entrust it to the children".

Of African inspiration, the garden Le lièvre et l'arbre à palabres uses narrative and staging processes to showcase water harvesting and agro-ecology techniques. It thus comes up with solutions for the desertification of the Sahel and global warming in Sub-Saharan Africa.

Halfway between tradition and modernity, this garden gives pride of place to an age-old and environmentally friendly material: soil, in its baked and rough-and-ready forms. Its layout takes us through landscapes featuring oases, savannas and tropical plants. 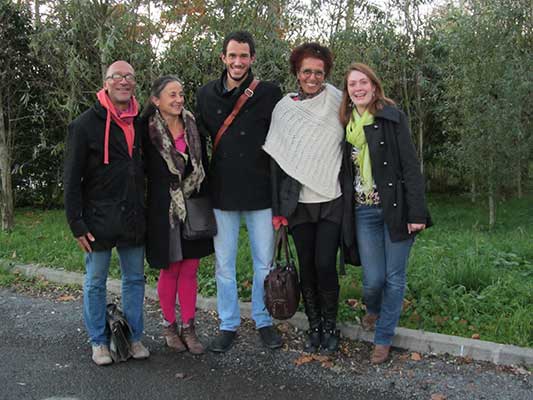 Originally harking from Picardy, Anaïs Baudoin has been enchanted by plants ever since she was a child. Back then she wanted to become a florist, but eventually went into landscaping - a broader profession where several disciplines intermingle. She thus enrolled at Agrocampus Ouest in Angers in 2012 and is now completing her final year. Specialising in territorial engineering, she continues to harbour a close interest in wild plants and the ecological dimension of projects. In conjunction with that, during her studies Anaïs has been on the constant look-out for links with the business world. She has been able to hone her knowledge on a gap year during internships in landscape firms and companies. She also took part in the Pignerolle gardens of expression in 2014 on the topic "A gust of folly in the garden", when she had the opportunity to get to grips with a whole design project from beginning to end. Taking part in the Chaumont-sur-Loire International Garden Festival is therefore a hugely enlightening adventure for her. She is all the more motivated by her presentation of an African-inspired garden that offers up a few solutions to the problems of climate change.
Florence Fofana
"Painter, engraver and potter, I live and work in Lille. I grew up in the North, cloud-watching with a pigeon-fancier grandpa, in a family of teachers who took an open-minded approach to the world around and rubbed shoulders with globetrotters. My dad is from Guinea. After graduating from the Lille School of Fine Arts with the National Higher Diploma of Artistic Expression, I worked as an artistic director in leading communication firms. Then I decided to go my own way and to assume my own convictions. In 1996, I set up my studio in a public venue. Over time, I have been able to invite over a hundred artists to come and exhibit. In 2008 I opened my own gallery. My paintings and engravings have been put on show in France and abroad. I have always taken care to join forces with those who stay mindful of community living, like charities (Mères pour la Paix) or international cultural events (UNRIC, UN, Conciergerie de Versailles). It goes without saying that, with my career path so intricately linked with the people of North France, I was delighted to be invited in 2010 to share in the adventure of the World Festival of Black Arts initiated by Léopold Sédar Senghor in Dakar. The African diaspora was the guest of honour and it provided a wealth of ideas on the status of the world's citizens harking from the African content. I exhibited a series of ebony colour linocuts. I have also sometimes given public readings of African poetry and tales, accompanied by a cellist, flautist and percussionist. In 2014, I designed the scenery for the children's performance "Aster et Lys". This is a short musical interspersed with songs from around the world - odes to nature and to nativity, arranged in a "magical" presentation. When the Maison des Artistes set up its vocational training programme in 2012, I was able to learn about and try my hand at the ancestral art of potters. I have put this to use here, in the garden for backing up the narration of the tale of the Hare and the Tree of Never-Ending Discussions".
Théophile Fofana
"I was born and bred in Lille, steeped in a literary and artistic family setting. Earth and Life Sciences caught my eye at a very young age, and I chose mainly to study sciences while gradually specialising in plant biology.  After enrolling at Agrocampus Ouest in Angers, I found a balance between my various aspirations in the landscaping profession. I have been immersed in myriad worldly cultures ever since I was a little girl, but feel a particular affinity with Africa and its diaspora through my roots. My imagination has been fired by music, painting, poetry and tales, and it wasn't long before I was giving thought to the place of landscape and garden art in Sub-Saharan Africa. I wrote "The Hare and the Tree of Never-Ending Discussions" and designed this garden with the aim of putting this question to visitors myself, all the while coming up with answers to the challenges of the future. The African-inspired contemporary garden is a concept that means a lot to me. I would like to find ways of developing it through my work as a landscape engineer".
Vincent Konan Kra
"I live in Lille where I was born in 1959. In August 1979, I came across cob during a placement restoring a Norman farm. Two months later, I enrolled in Lille School of Architecture and continued teaching myself about cob on the side. When I graduated I decided to design and build contemporary homes exclusively out of cob. The first such homes built entirely out of cob sprung up in the North and South regions (Gard). By 2009 I had designed and built the very first eco-chalet (HLL: Habitation Légère de Loisir) in France - a 43 m² micro-habitat built entirely out of cob. I also keep my skills honed by teaching the Visual Arts and Civil Engineering in vocational sixth-form colleges and secondary schools - having now spent fifteen years in National Education. After twenty years in the business, blending Architecture and Sculpture in every one of my projects, I have become a fully-fledged cob sculptor. I am innovating by developing cob that is fully resistant to bad weather for sustainable use in outdoor environments. Since October 2010, I have put my designs on show to the public: sculptures, paintings, bas-reliefs, frescoes, designer furniture, ornamental partitions, micro-habitats, everyday artefacts, jewellery, toys ... In 2015, I founded "KRALTA Le Torchis Artistique", which is entirely devoted to cob in art. Among the many services, placement-based training programmes and hands-on workshops, as well as an array of products available, I am also developing a range particularly intended for garden lay-outs".