Le Jardin des Émergences is a metaphor of the life force harboured within plants, of their energy. It is a message of hope for the 21st century landscape.

The climate change wrought by Man has eradicated the plant world. The ill-treated earth is becoming harder to find, the soil is becoming saturated with minerals and large shale and slate slabs are forming on the surface. Plants are rebelling, reacting and taking their revenge in full life force. They are breaking through the Earth's crust and venturing forth to conquer the light.
As we wander through, we are taken aback by the contrasts between the dark minerals and luminous plants sprouting from the ground. The plant forms bring to mind the earth's vibrant movements of breaking away, erupting and exploding as it opens and cracks.
By seeking out light for their survival, the plants, in their determination, are capable of a remarkable inventiveness of forms and colour, and of unsuspected energy. They break through the Earth's crust, causing it to crack and fracture.
Drought-resistant yucca plants pierce the soil, making room for the substrates of herbaceae, perennials and other annuals well suited to warmer climes. The predominantly orange and yellow colours are reminiscent of flames and fire, and stand out against the black slabs.
The 21st century garden is a hymn to the renaissance, bursting forth and life force of the plant world. 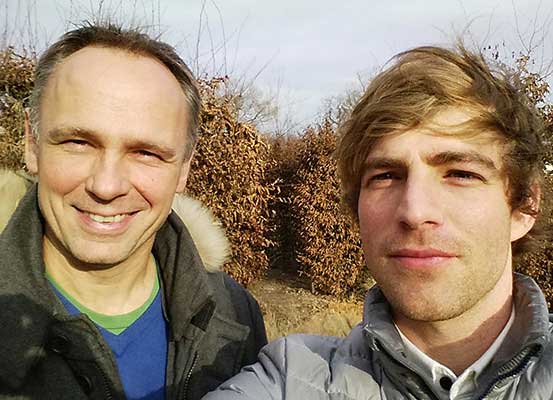 David Simonson grew up in San Diego, in Southern California's chaparral coastal region. His sense of affinity with these characteristic landscapes motivated him to take up landscape architecture studies at California Polytechnic State University. He has lived in Paris since 2009 and developed his love of plants as a gardener. He has deepened his knowledge of landscape architecture through a two-year course at Versailles National School of Architecture. His perception of the garden in the landscape factors in the "genius loci". By combining ecology, occupants and architecture, each garden design is a unique proposal. David Simonson designs timeless, sensitive spaces that encourage us to connect and interact with nature. Gentle intervention without making any major alterations creates spaces you feel have always existed, which pique your curiosity and are conducive to contemplation and reflection.

Pierre Lavaud's gardens are the fruit of his sensitivity and close affinity with nature. His conceptual method draws on his empathy for living organisms, his understanding of ecology and taste for culture. After a childhood spent partly in the great outdoors, on a farm in the Prealps mid mountains, he graduated from a prestigious business school and took his first professional steps as a business founder in investment consulting and events. A few years in, he reviewed his values and priorities, henceforth giving precedence to the art of living, well-being and harmony. The importance of nature became clear to Pierre through these convictions, and he decided to enrol in Versailles School of Landscape. His meeting with Gilles Clément would be decisive and reinforce his intuitions. Since then, he has been designing and laying out gardens where life takes pride of place: careful attention is paid to the role we play in our surroundings and to our relationship with nature.