Ticketing
Manolo Chrétien is fascinated by the luminous and almost metallic waves of the Loire. He kept chasing what he calls his Aluminations: these moments of magical reflections and lights, where everything is wavy, causing a natural drunkenness, which tips the artist into a parallel world, a second state of fusion with the material, where the deformation, transformation and distortion of the media make you feel like the photograph is verging on a painting.
Manolo Chrétien has continued his quest for lights with metallic effects for over 20 years now. He deals with three worlds with this same sense of wonder:
- Air with aircraft and fuselages that feature undulations caused by hours of flight, and more recently “skies seen from the earth” which, using a fisheye lens, create a global view of our atmosphere.
- Earth with urban metal and its dream-like reflections in the hollows and dents of bodywork and other facades.
- Water with its moving surfaces and fleeting waves created by the current and winds.
The latter is the core of the exhibition at Chaumont-sur-Loire. 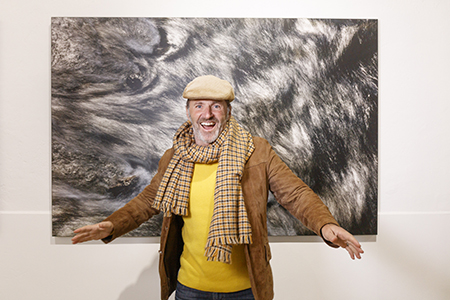 Manolo Chrétien was raised between the lights of the Mediterranean and the English Channel. He became passionate about photography the day his father returned from Moscow in the 1980s with the gift of a “Lomo”, a camera used by the KGB, which has since become a classic.

An artist at heart, he chose to study art at the ENSAAMA School of Art & Design in Paris. There, he met his wife, Céline-Pia, with whom he founded a graphic design agency in 1991 and shares his artistic life. They have been creating artworks together since 2015, under the name Man&Pia.

Alongside working as a graphic designer, he has continued his photographic quest in three key stages: first, the Effets Mer theme in 1990, where his childhood spent by the sea guided him to explore the erosions of time. He captured surfaces exposed to marine corrosion (ships, containers, etc.) in detail, as well as the reflections in the backlit water when the sea has a“sardine-skin” effect. Then his Aluminations (a name he invented at the time from his “keywords”: hallucinations, illuminations, and aluminium, he has since registered it as a trademark) began with the Juste-Ciel series in 1995, where his childhood surrounded by the Air Force (his father, Jean-Loup Chrétien, was a test pilot at the time) resurfaced through close-up shots of the aircraft that raised him at the end of the airfield in the South of France in the 1970s.
Finally, his Aluminations drove him into the urban environment, in particular, the streets of New York, where he took photos of reflections in the aluminium of transport vehicles and the facades of contemporary buildings.

His photos are exhibited in contemporary art galleries in France, Europe and around the world.