Dominique Bailly has worked with the forest and to the rhythm of its movements for a long time. Her knowledge of the forest inspires her to use a dual vocabulary, both formal and symbolic, linked to primitive and sacred architecture, and gives rise to sculptural works which are both raw and geometrically rigorous. For her plant architectures, she uses the straightest branches which come from pruning the surrounding trees; here they are gathered together, bent and tied onto the metal structure which supports them.

Her work all forms part of one quest: finding the origins of architectural sculpture by “presenting nature on stage” and creating structures and spaces whose mysterious quality triggers memories, associations and interpretations.

L’Abri ("The shelter") presented at Chaumont-sur-Loire is reminiscent of that in the vaulted space of the amazing Water Tower, completely fitting in beneath its arches. 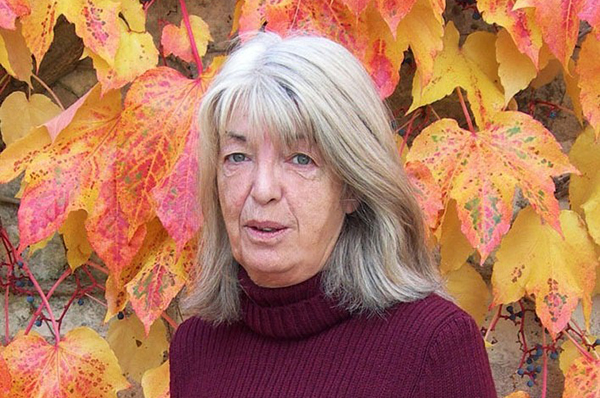 Dominique Bailly was a sculptor. She lived and worked between Paris and Touraine. From the mid-1970s onwards, her work bore witness to a contemplative relationship with the natural sites she chose as living spaces (the Breton and Limousin forests, the Vendée coastline and the banks of the Loire).
Her artistic approach, which was essentially based on a relationship with the landscape, followed two paths: creation of sculptures in her studio and direct intervention on the landscape.
In the studio, she liked to work in close relation with her materials, exploring the many possibilities of shape they provided. Her creations were peopled with sections of oak tree trunk, elliptical beech wood forms and sequoia spheres a metre across. She often worked in series, as she did with the “Larmes de la Terre” (Tears of the Earth) series of volcanic bombs, and with the “spheres” and “strips” whose presentation she then organised in the form of installations. Some were simply set on the ground, either isolated or arranged in meticulously aligned sets, while others were suspended here and there, depending on the place where she was exhibiting them. She arranged her pieces so as to suggest an itinerary of some kind, while leaving onlookers free to wander among them as they pleased. Drawing was always a key part of the exploration of shape in her work as a sculptor.
Operating directly on the natural environment, she created vegetable architectures, events, installations that sculpted space.
Her direct interventions on the landscape had the same purpose as her studio work: revelation of a shape, a meaning, a hidden story. They were akin to gardening and archaeological excavation, bringing to light the most significant features discovered during her initial survey of the site concerned and seeking to highlight its spirit. Such works required walkers to move about, to involve themselves physically, guiding their progressive discovery of the landscape and including them as participants in the site whose rhythms and topography they were exploring: “sculpture walks” that the artist brought into being within the familiarity of megalithic alignments.
For interventions with direct links to architectural projects, she sought to create a dialectic between work, landscape and architecture, taking full account of the site and its environment’s historical, spatial and functional aspects. In this context, the work was not so much “an object to see” as “a space to experience”, constructed for a given site. The goal was to create spaces and structures that were not simply formal but which were capable of providing a genuine experience of the site, requiring time and space for reflection and movement.
She died on 30 July 2017.