Ticketing
Agnès Varda is exhibiting a hut in the form of a greenhouse where sunflowers are growing. It is made out of a copy of a film she made in 1964: Le Bonheur (Happiness).

“My nostalgia for 35-mm cinema films turned into a desire to recycle them… I build huts with abandoned copies of my films. Abandoned because they’re now unusable for screenings. They’ve become huts, favourite houses of an imaginary world.

In those days, copies of films arrived in projection booths in the form of 5 to 8 round metal boxes 4 cm thick. Each box contained a metal reel on which 500- to 600-metre strips of film were wound: the film in images with the soundtrack in an optical record along the side. The booth projector had two lamps; one transmitted the images and the other the sound. These days, films come as digital files containing image and sound and weighing an average of 200 grams when they’re not dematerialised altogether. Large numbers of reels and films were simply thrown out… Jacques Demy and I found ourselves stuck with endless copies that cinemas simply didn’t want anymore. As you know, I’m a great gleaner and recycler.

This is the third hut I’ve built. I imagine a specific form for each of my films. Le Bonheur was made in 1964 and told the story of a happy family, played by Jean-Claude Drouot, his wife and children. They liked picnics. I shot the film in Ile-de-France with impressionist painters in mind. The music was by Mozart. The credits were shot near a field full of sunflowers, flowers redolent of summertime and happiness.

I made this greenhouse with its special double windows out of a complete copy of the film, 2 159 metres in all, enough to complete its construction. Visitors will be able to go inside and see the film’s transparent images close up. 24 images of dear Claire Drouot equal one second of film. You’re surrounded by the film’s duration and images of a time long past. And the boxes containing the films became obsolete too. I love those boxes. I remember that we carted around masses of them (at least a hundred), which clinked together when we shoved them into car boots to go and mix the films. Boxes for images, for live dialogue, for music, and for sound effects… Is this nostalgia again and/or recycling? A royal arch made of empty 35mm film boxes invites us to make our way into the kingdom of the second life of films.” Agnès Varda 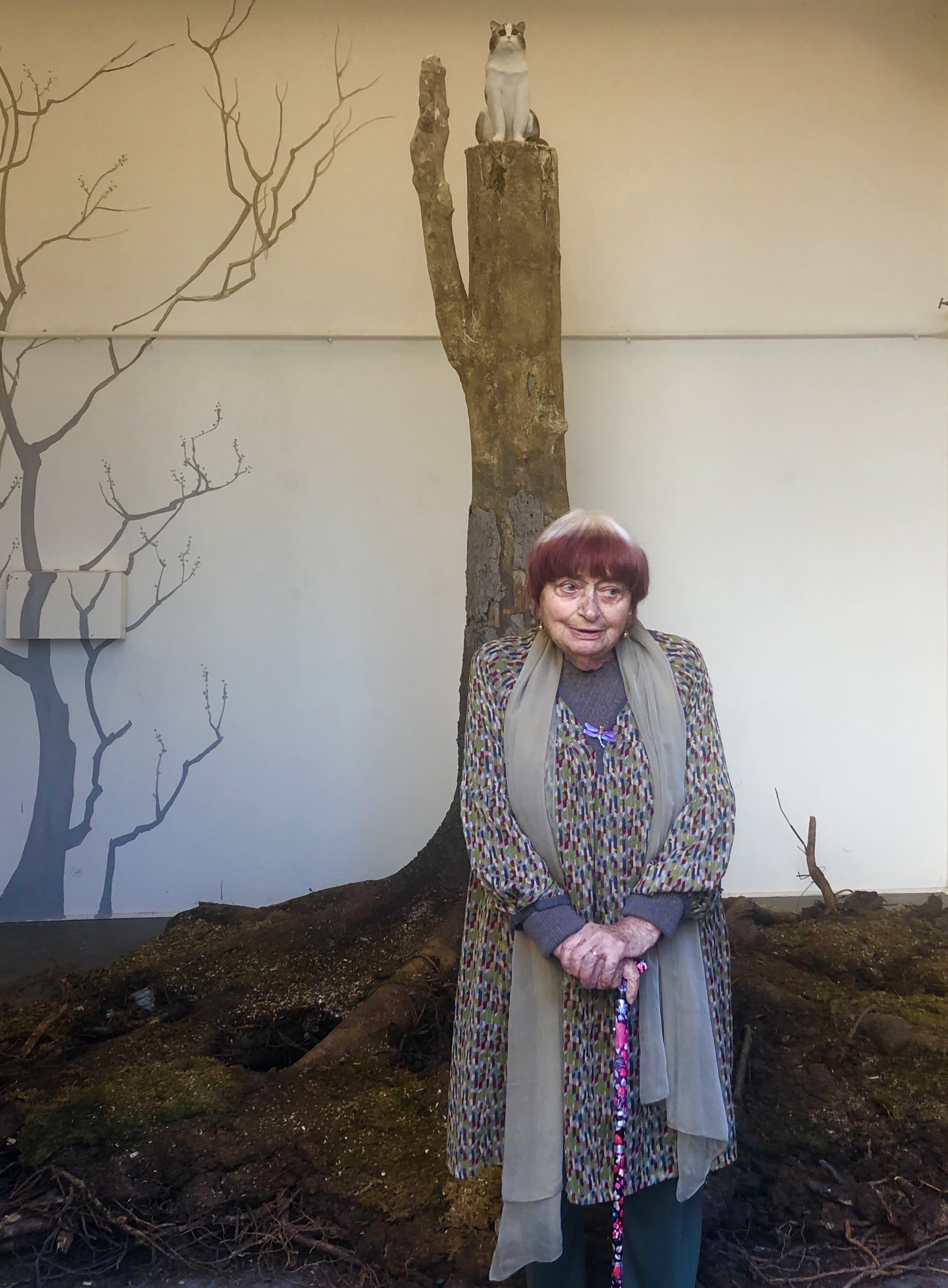 Agnès Varda was born in Belgium in 1928 but left the country with her family in 1940 to escape the bombings. They settled in Sète. She went to Paris as a student, attending Bachelard’s classes at the Sorbonne and enrolling in the École du Louvre, where she obtained a Certificate of Professional Competence (CAP) in photography.

In 1949, she worked as a photographer alongside Jean Vilar, who was also from Sète and had just created the famous Avignon Theatre Festival. Her photographs of Gérard Philipe and Maria Casarès brought her to the public eye. She followed the director and his company to China, Cuba and beyond. When she made her first full-length film, La Pointe courte (The Short Headland) in 1954, it was no surprise that she chose two actors from the Théâtre National Populaire, Silvia Monfort and Philippe Noiret (then a newcomer to cinema). Edited by the young Resnais, the film heralded the audacities of the New Wave, of which she would become one of the period’s few female directors. She followed up her first public success with Cléo de 5 à 7, while Le Bonheur was awarded the Louis Delluc Prize in 1965.

Alternating feature-length and short documentaries and fictional films; she was commissioned to make a film on the Loire Châteaux in 1957, and then went on to film Les Créatures, a dreamlike tale starring Catherine Deneuve. In 1967, she visited the United States along with her husband Jacques Demy, a filmmaker she had met at the Tours Festival in 1958. She got to know Andy Warhol and Jim Morrison in Los Angeles, where she made a film on the hippie counterculture (Lions Love) and a documentary on mural paintings. In 1978, she set out to meet her neighbours in Daguerréotypes, while in 1982 her film Ulysse drew inspiration from a photograph taken in 1954, mixing the real with the imaginary. In 1988, she made two films starring Jane Birkin: Jane B. par Agnès V. and Kung-Fu Master.

Skipping from one subject to another, a devotee of collage and wordplay, Agnès Varda also bears witness to her times, evoking feminist struggles in L’Une chante, l’autre pas (One Sings, the Other Doesn’t) and the plight of those that came to be labelled NFA in Sans toit ni loi (“Without Roof or Law” – entitled “Vagabond” in English), which won the Golden Lion at the Venice Film Festival and enjoyed enormous success with filmgoers in 1985. Later, with Les Glaneurs et la glaneuse (The Gleaners and I), which she filmed using her digital camera and with a smaller team, she highlighted the excesses of the consumer society.

Agnès Varda has a very special place in French cinema. This being so, she was commissioned to make a film tribute to the 7th Art to mark its centenary in 1995 (Les Cent et une nuits de Simon Cinéma – entitled “The Hundred and One Nights” in English). In more intimate fashion, she made three films, including Jacquot de Nantes in 1991, based on Jacques Demy’s inspired childhood. Awarded an honorary César for Lifetime Achievement in 2001, she has been involved in the contemporary art scene for the past few years, through exhibitions and installations (Cartier Foundation, CRAC Languedoc Roussillon, LUX de Valence, Galerie Obadia, CAFA in Beijing, LACMA in Los Angeles, Centre Pompidou, Blum & Poe Gallery in New York, etc.). In 2008, she made an affecting self-portrait, Les Plages d’Agnès (The Beaches of Agnès), which was hailed at the Venice Film Festival and won the César for best documentary film. She was awarded an honorary Oscar in 2017. The same year, she collaborated with artist JR to make the documentary Visages, villages (Faces, Places), which was awarded a Golden Eye at the Cannes Festival. Her most recent documentary, Varda par Agnès (Varda by Agnès) was presented out of competition at the 69th Berlin Film Festival and broadcast on ARTE on 18 March 2019.

Agnès Varda died on the day of the inauguration of her exhibition in Chaumont-sur-Loire.