“Accessories have an important role in our stressful lives. If you go out for dinner and you don’t have time to go home to get changed, you can take off your jacket and put on some jewellery. It’s much easier than wearing an evening dress on the underground!” Loulou de la Falaise.

This Jardin Bijou (Jewel Garden) is a precious garden in every sense of the word: it is both steeped in luxury and sophisticated, but also remains a fragile and delicate garden. The garden, its flowers and fruits and the time we spend there are all priceless.
The Jardin Bijou is made up of robust plants which flower through to the autumn and was designed to be admired : its stripes are reminiscent of a bayadere fabric. At its heart, the jewel rests on a plant carpet which has the look of a moiré pattern, highlighting its flowers with their amethyst, lapis lazuli, pearl and coral colours.
This is also a garden where you can linger a while: sitting on benches made of twisted, enveloping branches, listening to the murmuring, sparkling water of the fountain and the twinkling streams.
“When it sends out its lively, mocking sound as it dances,
This world aglow with metal and stone
Transports me with delight, and I passionately love
Things where sound blends with light.”
(“The Jewels” extract from “Les Fleurs du mal” [Flowers of Evil], Charles Baudelaire) 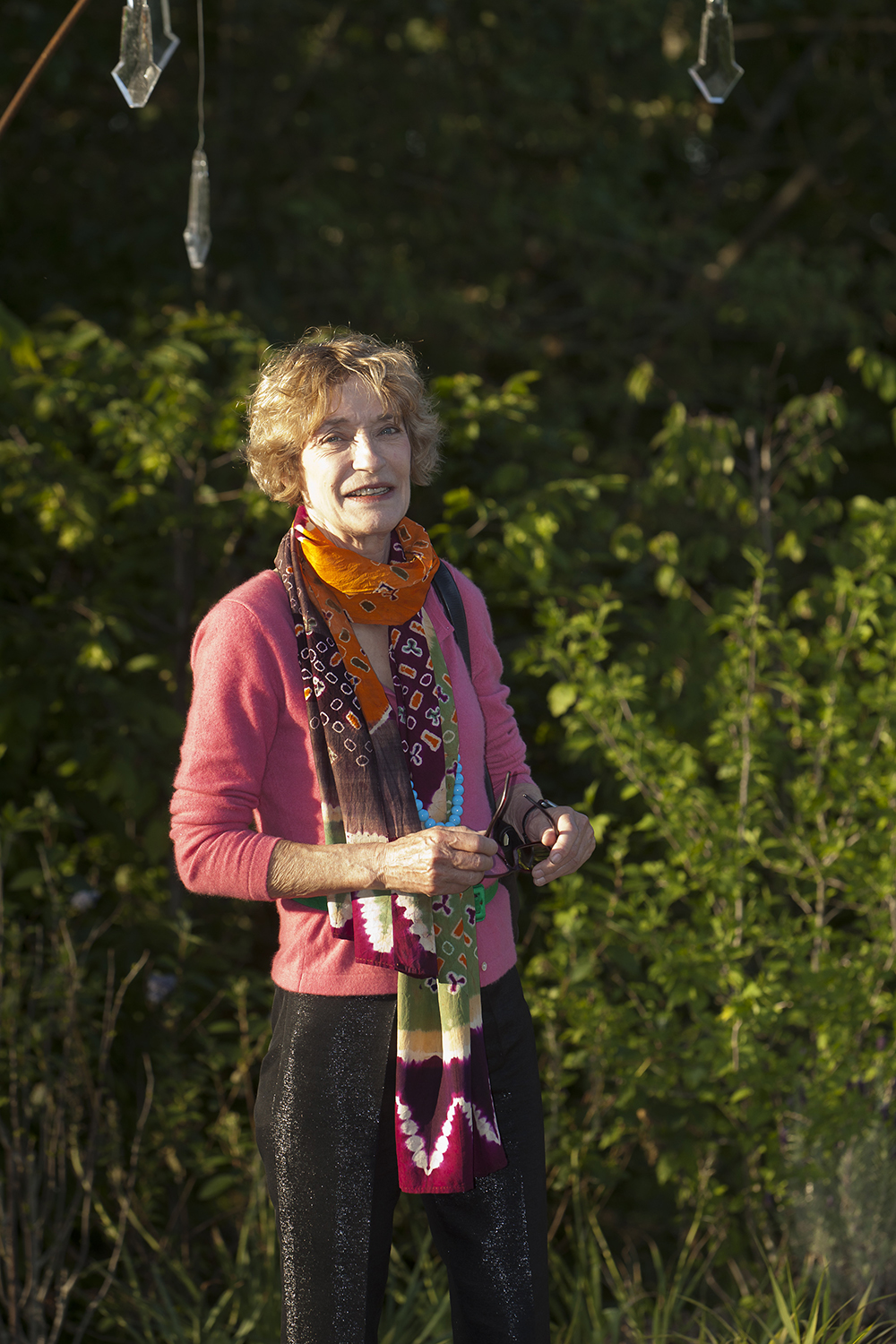 Loulou de la Falaise was born in England of an Irish mother, Maxime, and a French father, Count Alain de la Falaise.
She was born into a large aristocratic and artistic family, with her mother being Schiaparelli’s favourite model and her maternal grandfather, Sir Oswald Birley, Queen Mary’s favourite painter. Loulou de la Falaise’s uncle, Mark Birley, is the owner of “Annabel’s”, the famous nightclub in Berkeley Square, London. At the age of 7, Loulou got a place at an English boarding school where she cut herself off from reality and developed her imagination.  She spent her teenage years in London and she enjoyed a real Bohemian lifestyle at this time.
Loulou began her career as a fashion editor at Harper’s Bazaar magazine. However, at the end of the 1960s, Loulou followed her mother – who had just remarried with the curator of the Metropolitan Museum, John Mackendry – to New York. There, Loulou quickly adapted to her new way of life; the photographer Robert Mapplethorpe and the artist Andy Warhol were part of her circle of friends. Her first steps in the world of fashion promised a great career ahead. Like her mother, who was a model for Cecil Beaton, Loulou became a model for Vogue and worked with the best photographers in the world: Richard Avedon, Helmut Newton, Steven Meisel and many more, while also designing prints for Halston.
Loulou de la Falaise’s first marriage was to an Irishman from a noble family, the famous Desmond FitzGerald. However, she left her husband and came back to Paris where, in 1972, she became a friend of the great fashion designer, Yves Saint Laurent, who was at this time beginning to make his way in the world of fashion and to build up his reputation in it. She became his muse, and even helped him create his designs including, in particular, the famous women’s tuxedo and his see-through blouses. After this she was a jewellery designer with him and handled the range of rings.
Yves Saint Laurent was bewitched by her outstanding beauty, her sense of taste and her creative flair and so continued to work with her until his death.  From 2003 onwards, the ex-model began to work for herself. Four years later, she collaborated with Asiatides to create a collection of decorative objects. In 2007, Loulou began working with Oscar de la Renta on his luxury jewellery line, which is to be found in the designer’s boutiques. Finally, at the end of 2008, Loulou started two new collaborative projects, one with the American television channel Home Shopping Network, for which she designs jewellery and accessories, and the other with Asiatides where she creates collections of porcelain and cloisonné objects.