The garden is an aquatic allegory of the seven deadly sins. Water is the central theme, with the writings of Thomas Whately and Jean-Jacques Rousseau as reference.

The seven scenes that we come upon as we first go along the wooden walkways that surround the central construction are:
Anger is symbolised by the waterfall, pride by the water mirror, greed by the drip-drop, sloth by the marsh, envy by the oasis, gluttony by the fountain or the “Bocca della Verità” (“Mouth of Truth”), and lust by the grotto.
In the centre, a confessional, a sort of contemporary construction, allows us to understand the garden and its aquatic installations in a manner different from that offered by the walk. The confessional encourages us to discover in greater detail, like a concealed observer and using four pairs of binoculars, various points of view targeted on the deadly, heady sins. 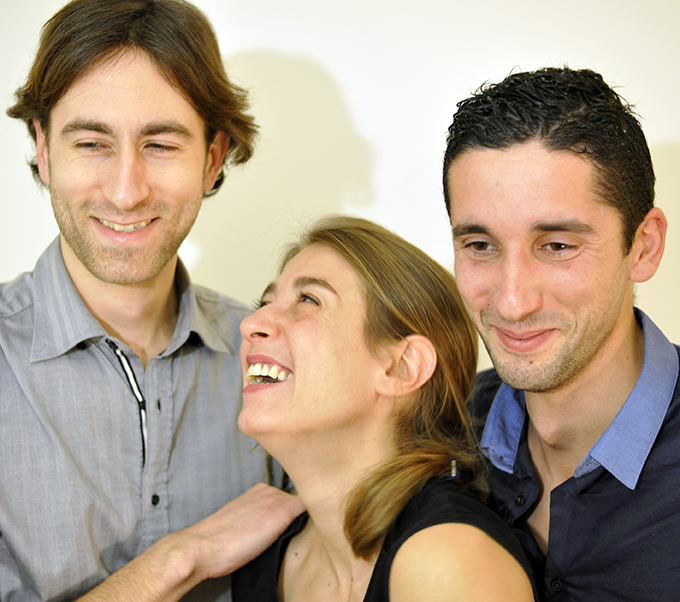 "Our group, comprising a garden historian, a DPLG landscaper and a landscape contractor, enables us to combine theoretical, empirical and practical knowledge in order to create gardens with several levels of interpretation and an overall consistency which is the fruit of our combined efforts and imagination. In historical coherence, the overall design and technical execution, our group displays a unity and a complementary nature which we consider essential for bringing a garden to life - a place where action meets reflection.”

Architecture and garden historian, Odile Marie Tombarello is also a landscape gardener. Her university education was multidisciplinary. She graduated from the Sorbonne Paris 1, with a DEA in History of art, specialising in History of architecture, and with a Masters in Historical gardens, heritage and landscape from a dual degree programme between ENSAV and the Sorbonne Paris 1 in 2004. She comes from a varied professional background. She started as a consultant for several architecture firms, including DPJ and Partners in Seoul, South Korea. There she had the opportunity to work on planning projects for public spaces and also for private projects and real estate groups. She also worked for a company specialised in plant importation and resale, in the nursery at the Rungis International Market. She has been working as a freelance landscape gardener since 2010. She is also a consultant for private landowners, green areas companies and architecture firms who require historical expertise on, for example, restoration or maintenance in a historical park. What has made her particularly fond of the competition is the fact that during her studies she wrote an essay on the first 10 years of the Chaumont-sur-Loire International Garden Festival (2002). The work was the first concerning gardens, but certainly not the last, as it is Chaumont which has made her want to go further in what was originally a passion for gardening.

Graduate of the École du Breuil, Adrian Lachoux enrolled at the RISE Paris business school. At the same time, he worked in urban planning and specialised in playgrounds. After being awarded his diploma, in 2008 he created "Cera Jardin", a landscape planning company specialised in creating high-end private and public spaces. These creations are characterised by a breaking down of textures and matter, so as to bring about a new perspective. Contemporary lines are emphasised by means of advanced technical skills and an innovative range of materials. He has already distinguished himself several times at landscaping competitions (award winner, Jardin en Seine Suresnes 2010). An important player who is recognised by leading Parisian landscaping companies, he also works in the field of landscaping carpentry expertise and supervises construction sites. He is regularly called upon by magazines and companies to carry out temporary works for events. Lastly, he makes a point of thinking outside of the box for his creations, considering the garden as a playing field and a base for his overflowing imagination.

Gregory Burrows is a DPLG landscaper, graduating from the École Nationale Supérieure de Paysage de Versailles in 2008. He has worked as a freelancer since 2011; He is the manager of Atelier Fertile, a design and landscape studies firm which promotes a holistic and full vision of the garden, a place which constitutes, as Caroline Mollie says, "the most sophisticated form of the pact made between culture and nature, a pipe dream which is all the more fascinating as it still has not been finished". After having completed his end of studies diploma on the transformation of the Monts d’Ambazac (Haute-Vienne) forest, he worked for several landscaping and town planning firms, including Atelier Alexandre Chemetoff. This experience gave him the opportunity to work at district scale, in Plateau de Haye in Nancy, whose successive planning projects were awarded the urban planning prize of the 2012 edition, in the "Large cities and metropolitan areas" category. Nowadays, his work is mainly focussed on projects for public spaces (squares, streets and districts), as well as private gardens (roof terraces, company gardens and individuals' gardens), and sketches for monitoring construction sites. Atelier Fertile enables him to create innovative planning projects with a great deal of thought put into the place and environmental issues.