Africa is an immensely diverse continent, not only in terms of its fauna and flora, but also its culture and spirituality. From the red sand dunes of the Namib desert to the golden grasses of the Serengeti savannah, wherever you are in Africa, its rhythm will beat in your heart, you only need to listen to it...

Going down the steps into this garden dug out of the ground, you will hear and feel the spirit of Africa playing even in your veins. Water, which is the lifeblood that irrigates Africa, will flow out of the walls and clarify your thoughts. The patterns on the clay walls will whisper an African tale.

Sat in the middle of the garden, you will be surrounded by the wonders of nature and the African spirits that inhabit it. 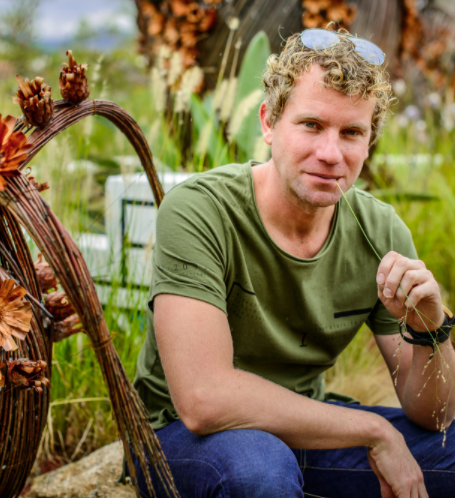 Leon Kluge grew up in the Lowveld Botanical Garden in South Africa. He studied horticulture and landscape design in Israel.
He then worked for the Société Nel Import and Export Company (SNIE), developing new landscape designs for their properties in Mayotte. He started the Fever Tree Nursery in Nelspruit (South Africa) which has generated considerable interest due to its unusual character.

His projects are shared widely in the press and appear in many architecture publications. Leon Kluge is invited to create unique landscapes around the world. He is the only African landscaper to have won the Gardening World Cup in Nagasaki, Japan. He also took the Best in Show for landscape at the Philadelphia Flower Show (United States), the most significant event in the gardening world. Leon Kluge has also won several gold medals at the prestigious Chelsea Flower Show (United Kingdom). He was the first African designer to win the gold medal at the greatest Asian gardening event: the Singapore Garden Festival. Finally, he won an award at the New Zealand International Flower Show.

Leon Kluge has created gardens for Disney, the United Nations, Hollywood and even for some governments. Each year he represents Cape Town and Kirstenbosch at the Chelsea Flower Show.
His gardens can be found in Mozambique, Singapore, New Zealand, Australia, the United States, Japan, South Korea, Israel, the United Kingdom, France, the Comoros, Zimbabwe and South Africa.

His company Leon Kluge Design is based in Cape Town in South Africa.