Bernard Lassus is a unique personality in the landscaping world. He is at once an artist, landscaper, painter, urban planner, researcher, academic and theorist, recognised worldwide for his profoundly original designs and views. Bernard Lassus combines art, architecture and the environment.

An extraordinary set of gardens by Bernard Lassus will be presented at Chaumont-sur-Loire. In a way, the Domain is becoming the conservatory of creation of this extraordinary landscaper-artist.

Made up of a combination of “historic” gardens by Bernard Lassus, not least a remarkable Théâtre de verdure (Open-air theatre) which the artist wished to be installed at Chaumont-sur-Loire, this will be extending the garden designed for the 2018 Festival. Urban, enjoyable and geometric gardens put on a dazzling show of the four seasons’ colours. The trees, in elegantly cut metal sheets featuring delicate openwork, stand alongside the rows of flowers hemmed tightly into strict parallelepipeds. The Theatre emerges with its backdrop and working scenery. The thickness of the metal sheets varies and metaphorical cascades unfold for the delight of visitors.

“Where? How do you get to experience this place, that one, here, and understand it? And how does your understanding lead from recognition to further exploration and greater knowledge of it?
Here, at the entrance to the already acclimatised site of this fragment of bocage:
- the symbol of a volume of light – light of a colour other than its context, “a pergola tree”, and another for the details of its crown,
- a surface composed of painted laser-cut sheet metal, with so many holes drilled through it that there is a suggestion of transparency, “the hedge”,
- a group of enamelled coloured balls: “a flowerbed”, a tip of the hat to optical tact.
Être là ... Un peu + (Being There… A Little More) above all requires visitors to occupy a fraction of the place itself. Their movement and presence must do as little damage as possible to what usually grows hereabouts, from grasses to hedges, and to those whose realm it is… snails, frogs, insects, birds... And that’s the reason for those “garden slippers”, to move around but avoid treading on the ground and its herbage.
Then, a stopping place, where you can find out what temperature it is (the thermometer)... or what the weather will be like tomorrow (the barometer)... and employ various different instruments to assess soil moisture level (the humidimeter)... wind speed (the anemometer)... ambient air humidity (the hygrometer).... ”. Bernard Lassus 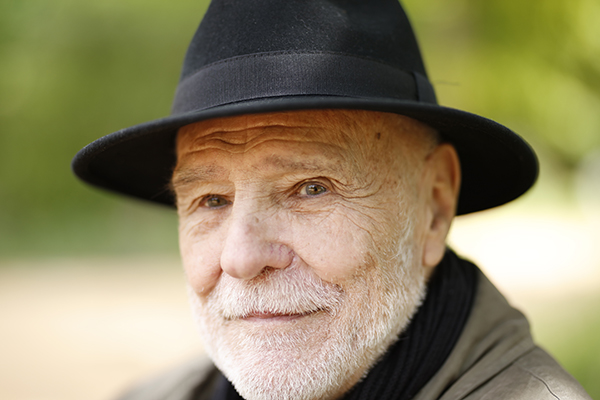 Born in 1929 in Chamalières (Puy-de-Dôme). In 1952, he got into the Paris National Graduate School of Fine Arts where he taught between 1968 and 1998. He has created a whole host of gardens, including the Jardin noir at Boulogne-Billancourt in 1967 and the Jardin des retours in Rochefort-sur-Mer, which won the Ministry of Culture’s Heritage Prize in 1993. In 1975, he presented his astonishing research on “inhabitant landscapers” at the Claude Lévi-Strauss seminar, at the Collège de France. From 1976 to 1985, he was a lecturer at the Versailles National Graduate School of Landscape Architecture which he had helped establish. Since 1989, he has been responsible for many landscaping projects along motorways. He has presented his work all over the world including in Germany, the United States, Great Britain, Poland and Venezuela. He exhibited at the Centre Pompidou in 2011 and 2017. For this latest exhibition, Bernard Lassus: un art de la transformation, le paysage (Bernard Lassus: an art of transformation, the landscape), he lays out an 800 sq.m. World garden which explores the contemporary issues shaping the art of landscaping.