Ticketing
“…the garden of my childhood, a garden woven out of memories of landscapes discovered as I went about exploring my world, my garden in my neighbourhood, Oasis, in my city, Casablanca in Morocco, the ochre lands of the South and the Atlas Mountains’ lush green valleys.
A garden of contrasts, between heat and shade, dry earth and the waters from the seguias and the irrigation basin, the desert world and the rose, the vine, quince trees, strawberry trees, and the colourful world of fruits, flowers and vegetables.
A bountiful, sensuous world alive with colour: the red of hibiscus, the purplish blue of jacarandas, the yellow of mimosas and lemon trees, the pink of laurels and bougainvillea. A “Majorelle-style” garden ambience created with whatever comes to hand, salvaged objects, plastic, discarded tins planted with mint and basil...
Push open a little blue door and you are in a café courtyard protected by a vine arbour that filters the light. The sound of water from a fountain or hidden waterfall, the exuberant abundance of a Garden of Eden, its multicoloured vegetable profusion exuding a soothing freshness… sit yourself down, taste, see, and listen to the birds as they sing.” Jacqueline Osty 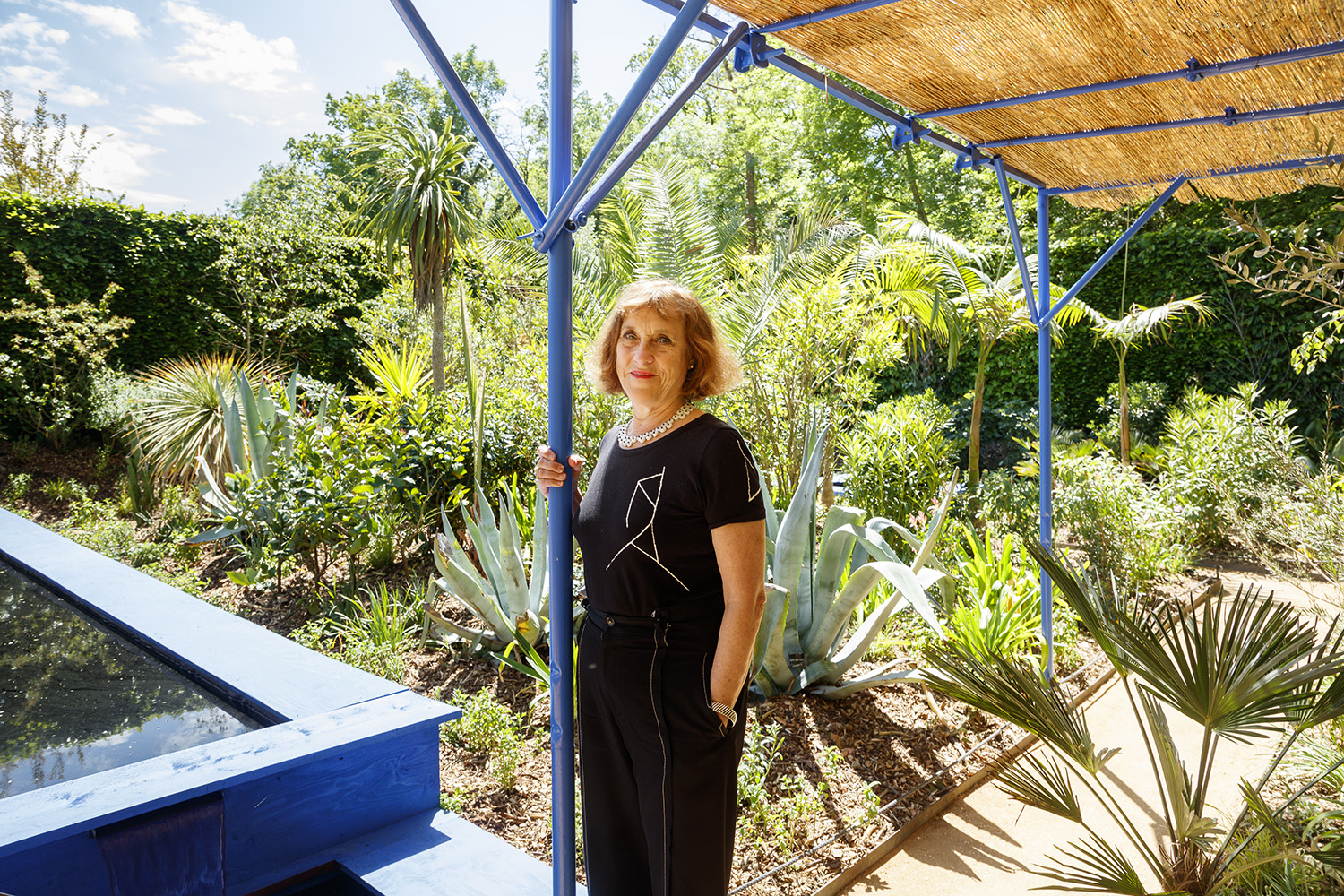 Jacqueline Osty was born in Morocco and spent her childhood in Casablanca before moving to Paris to study architecture at its School of Fine Arts and then landscaping at the Versailles National Higher School of Landscape, from which she graduated in 1982. Her dual training led her to focus on urban landscapes and ask herself what it might mean to “build a city” using landscaping techniques: “Existing notions of buildings were not for me. I was drawn to larger scales, the notion of the moving space of landscape. I like the idea of not having to fit everything in.”
She opened her agency in 1985. Her small business became Atelier Jacqueline Osty et Associés in 2006 and has never had more than twenty or so employees.
She spent fifteen years teaching at the Blois National Higher School of Nature and Landscape.
Weaving city landscapes might be one way of summing up the long series of creations that have developed Jacqueline’s way of approaching urban projects, either in close collaboration with architects or as sole authority.
In addition to her many other accomplishments in France and abroad, two Paris projects have been of particular note in her career so far: Clichy Batignolles Park and Paris Zoological Park (commonly known as Vincennes Zoo). In both cases, it was a matter of making way for nature in the city, in Paris, but in two very different fashions. For Clichy Batignolles, creation of a landscape based on the dictates of sustainable development, i.e. a landscape born of technical knowledge and designed to showcase nature in the city. For the zoo, creation of landscapes referencing faraway natural settings, designed to accommodate the most intense of living presences, wild animals. In Clichy Batignolles, the priority given to nature did not prevent her from collaborating with the architect François Grether and continuing work on designing a park whose layout was in keeping with the neighbourhood’s existing streets.
The demand for nature in the city continues to grow.

Since 2018, all Jacqueline Osty’s projects have born witness to the fact. In particular Place Feydeau-Commerce in Nantes and Place Pradel-Tolozan, in a city centre that has otherwise remained largely mineral, as well as the Promenades de Reims, long dominated by roads for the use of motor vehicles alone and now open to other uses in a wooded landscape.