Ticketing
What is an ideal garden composed of? Flowers, obviously! But shade too, freshness and the gentle sound of leaves rustling in the wind… Something more, perhaps? Why not a mountain or a reflection of the sky?
Inspired by one of Monet’s canvases, along with a famous Chinese painting entitled Night Scenes in Xiaoxiang, and the Zen image of a man lying down near a heron in a bamboo circle, this garden merges western and eastern illusions, opening up the doors to the imagination.
The circular pathway is bordered by an altogether impressionist, flower-filled outer alleyway. It winds its way around an openwork structure shaped like a Chinese mountain and leads into the Zen heart of the garden. These three distinct areas intermingle visually in answer to the search for an inclusive philosophy.
In Tao philosophy, the circle, without beginning or end, represents the universe, nature, eternity and harmony all at the same time. Whereas it is all too easy to get lost in our world, where everything is moving ever faster and getting ever more complex, the ideal garden brings us back to simplicity, authenticity and serenity.
A balanced relationship between nature and humankind re-establishes the present, in a garden of illusions that might well be approved of by the Swiss-born philosopher Alain de Botton, who, in his book The Architecture of Happiness, states that “A feeling of beauty is a sign that we have come upon a material articulation of certain of our ideas of a good life.” 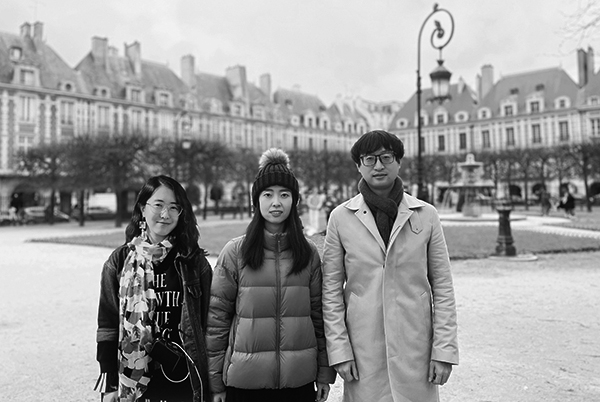 Liu Xiangcheng is an architect and urban planner. He founded the Illimité Architectes agency in Shanghai in 2018 and opened an office in Paris in 2021. He was chief architect at the Tongji Architectural Design Group in Shanghai for five years and possesses extensive experience in the design and implementation of architectural and urban projects. His achievements include Huawei’s head office in Shenzhen (2018, 180,000 m²), the Grand Theatre in Chifeng (2017, 80,000 m²), the Professional University Campus in Chengdu (2020, 500,000 m²),  renovation of the Hengshan Hotel, Shanghai (2019, 30,000 m²), the Yungang Civic Cultural Centre in Datong (2021, 100,000 m²), the Cadre Training Base in Zuoquan, Jinzhong (2020, 4000 m²), the Urban Educational Complex in Gaobeidian (2019, 200,000 m²), the Urban Renewal Creative Park in Shanghai (2018, 16,000 m²), and the Railway Construction Group’s head office in Lingang, Shanghai (2019, 50,000m²). He won First Prize at the Shanghai Excellent Survey and Design Awards in 2020, Outstanding Architect of 2019, and the Best Original Award in 2018. His unique professional pathway has provided him with a comprehensive, intercultural and interdisciplinary vision. He makes creative use of resilience theory to achieve multidisciplinary integration – urban, economic, social and ecological – in order to solve urban and architectural problems on various scales. He holds a Master’s in Architecture from the Tongji University, a Master’s in Urban Projects from the Paris-Belleville School of Architecture and a Specialised Master’s in Urban Management and Real Estate (MS MUI) from ESSEC Business School.

Zhang Yiyang, a landscape architect who trained at Tongji University in Shanghai and then at the Paris-Belleville School of Architecture, has worked as project manager at a number of Paris agencies and has had the opportunity to work on projects on a variety of scales, from a 1200-m² ephemeral garden for the China International Garden Exhibition to 40-hectare joint development zones (ZACs) in France. Her versatile career path has led her to establish a work method that assesses a project in its urban context while integrating it into an ecosystem and creating a specific aesthetic. Her objective is to design evolving, narrative spaces. Two major philosophical principles underpin her designs: consideration of the relationship and interaction between user and work, and appreciation of a site’s unique history and its adaptation to the future while keeping its original spirit intact. She is inspired by nature, artworks, and even music. She draws her creative resources from Chinese culture, which she then expresses in designs that make use of Western methods.

Guo Xiaoxi is an architect. She holds Master’s Degrees in Architecture from Tongji University and the University of Pavia, Italy, and is a doctoral student in architecture at Tongji University. She has won the Graduation Design Award, the Habitat Academic Year Award and the Governing Board’s Excellent Architectural Design Award, as well as the Taiwan Team 20 Cross-Strait Architecture and Planning Newcomer Award. She focuses on the history and theory of Chinese architecture (since 1919). She has published a dozen or more articles in international journals and participated in the compilation of six architectural monographs.