Paysage de feu is an arrangement of cut branches, some of which are burnt, that have been collected together in a protected area. They are set out to create a “posthumous botanical garden” starting with species from the Cerrado – a tropical savannah in the centre of Brazil. Over the last few months, the whole world has been moved by the deforestation in the Amazon, but the destruction of the Cerrado, to make space for soya crops and grazing, continues without international protest and without any measures being put in place to stop it. Regular, intentional fires in the Cerrado cause branches to twist, preventing them from growing and causing them to sprout in unexpected directions. Some seeds with particularly thick coatings germinate even after they have been charred. This is why we are finding ourselves faced by an ecosystem where plants are capable of adapting to fire. As well as giving the impression of an abattoir, the upside-down branches, hung tip down, also resemble roots. In the very dry environment of the Cerrado, trees have to search very deeply in the ground for the water that they need. There is more below ground than above, and more of the tree is root than branch. 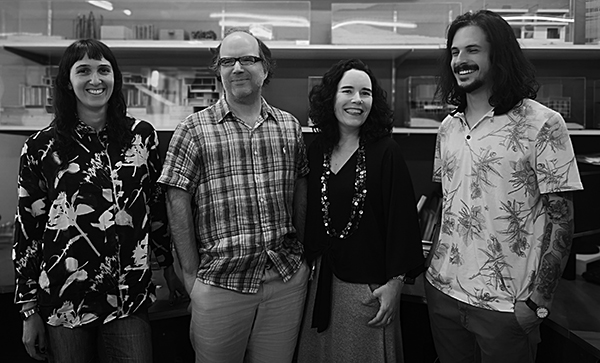 Vazio S/A is a studio that mixes research on urban voids and architectural practice. We strive for an active approach that is full of purpose, a vision of informality, empty spaces and the market as something that can point the way towards new projects and opportunities. Allied with the portfolio of a conventional firm (houses, commercial buildings, urban design, etc.) is an experimental studio that explores architecture competitions, publications, partnerships with social and artistic groups, and ephemeral urban interventions in search of new relationships between contemporary culture and architecture.

Graduated in Architecture and Urbanism at Universidade Federal de Minas Gerais (2011) and Master in Urban Geography at the same institution (2016). Daila Coutinho studied also Landscape Architecture at University of Algarve, Portugal. Participated as junior researcher at the Tutorial Education Program (PET EA-UFMG) and was intern of the architecture and design studios Mach Architects and Superficie.org. Collaborates as architect at Vazio S/A since 2012.

Graduated in Architecture and Urbanism at Universidade Federal de Minas Gerais (2016), Frederico Almeida also studied at the Karlsruhe Institute of Technology, Germany. He was shortlisted in the Tok & Stok university design award (Brazil, 2016) and was intern of architecture studios in Brazil and Germany, such as BCMF Architects and h4a architects. He started collaborating at Vazio S/A as an intern in 2014 and as architect since 2018.