The Villa d’Este, near Rome, features a fountain depicting an exuberant Diana of Ephesus, goddess of fertility, with multiple breasts. This garden, which was directly inspired by that water feature, has an adobe wall in the centre, a spring of life from which milk of lime flows into a basin. Milk of lime, conventionally used as disinfectant to improve soils, remove moss from lawns or cover the bark of fruit trees, is equally suited to the metaphor of maternity as it is to that of healing. The garden encourages us to nourish just as compassionate and generous a relationship with our environment. Its contours are reminiscent of a damp forest atmosphere, where the fruits of the harvest and of trees do not exhaust the soil. On the way out, the large quantities of minerals acts as a warning. If we do not take care of nature, plants will disappear. We cannot feed off the land unless we agree to grow and protect life ourselves. Sources and resources are at stake here: where do we come from and what sort of future are we able to prepare? 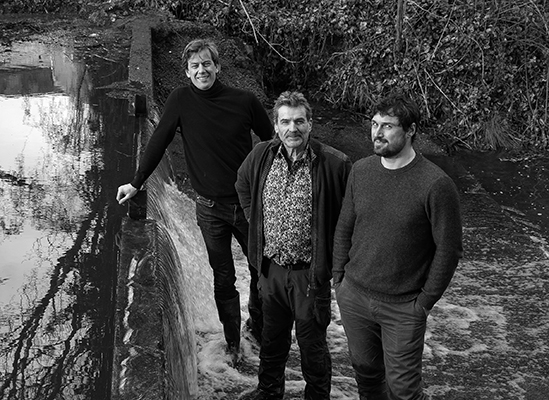 Bertrand de La Vieuville is a landscape designer who is dedicated to the design of all sizes of gardens. Having studied agriculture and biochemistry, he completed his studies of plant life at the French School of Landscape Design in Versailles. Fascinated by the use of space, its intimate links to the plant world and its connection to all strata of the landscape, Bertrand de La Vieuville creates unusual gardens that are practical and aesthetically pleasing. He integrates humans into their environment, ensuring sensitive and happy co-existence with plants. He likes to create comfortable spaces, providing users with a peaceful, serene environment perfect for observation, contemplation and discussion. More attached to the notion of common sense than environmental demands, he tries to place each project in context and save resources as much as possible. However, his artistic eye systematically reviews each project to take the garden beyond the present and the visible. He opened his creative studio in 2008 to undertake public and private commissions. In 2019 he was elected president of the French garden designers’ association, the Association des Concepteurs de Jardins. He is thus actively involved in promoting the profession, nurturing new talent and bringing together the driving-forces of garden design.

François Piednoir
“I worked for around ten years in sound recording for films and documentaries. This taught me precision and gave me an ear for quality. I honed my perception and my critical faculties while collaborating on art projects. Attentive listening to soundscapes formed my interest in long time scales, that of nature and the creation of the landscape. Then, I wanted to move from being a viewer to taking part, to rediscover something essential, to be rooted in the earth and the plant world, a reminiscence of my childhood in the countryside. I was intuitively guided towards working with living material for the benefit of living beings. Towards creating places to awaken the senses, to touch, to stimulate, to make people dream. I trained as a garden designer at the French School of Landscape Design in Versailles. There, I acquired the expertise and intellectual tools necessary to think through and design gardens as well as feeding my desire to learn. I then set off to change the world around me. I worked on the design and/or creation of urban and show gardens as well as larger private projects in rural areas with the design agency Daphné Charles - Paysages. I am also responsible for the kitchen garden at the Hôtel Le Barn (Parc de la Haute Vallée de Chevreuse) where I look after the 2500 m2 eco-friendly garden that I designed and created.”

Having followed an unusual career path, mostly involving nature and art, Jean-Marie Desgrolard has always swapped between sculpture, painting, installations and gardening. He does not make his professional life his top priority and likes to say that it's not the projects that make him a professional, but his professionalism that shapes his projects. In his eyes, the only things that count are creativity and curiosity that permeate the present and stand the test of time. For him, a garden is the most complete and most complex creative challenge, and therefore the most fertile for improving our relationship with and understanding of the world. From his earliest career as a farmer, via visual arts to garden design, he has always been more attached to nature than interested in the aspects of it that he didn’t understand, or our mysterious relationship with it. A graduate of the French School of Landscape Design in Versailles, he sees garden design as a synthesis and symbiosis between a temporal material, a person and a place: the earth, humanity and space are still inventing, resolving, understanding and living, and he tries to get involved with that.