Ticketing
David Bitton and Philippe Collignon have given free rein to their imaginings about the Garden of Eden in Genesis. Little is known about Adam and Eve’s garden, other than that it is believed to have been situated in the Middle East, near what was once Mesopotamia, and that two trees grew there: the tree of the knowledge of good and evil and the tree of life.
They have dreamt up four concentric, acoustic spaces that visitors will cross through one after the other. The first circle symbolises the crossover between life and the after-life. Darkness and warmth are everywhere, with tangled creeper plants and slate pieces strewn on the ground. A range of bass notes provides a melancholy soundtrack. The air is free from any fragrance. Having now left the real world, visitors find themselves in a second, bright white space. Devoted to introspection, it attunes its scents to the sound ambience. Light reflects off the glass pebbles. A set of mirrors then ushers us into a zone of questioning. Who am I? What have I done? Where am I going? Natural light, enhanced by the acrylic mirror reflections, allows us to read mysterious inscriptions. Beneath a green ceiling in hues of silvery grey, music and fragrance greet us once again. At the heart of the garden, we finally reach the eye of life. This is the end of the road travelled – the true reckoning with oneself. The tree of life is represented here by a heavenly olive tree, a tree which, existing nowhere else, carries within it our fantasies and our true desires. Surrounded by a watery retina, it alludes to the divine eye seen from above. 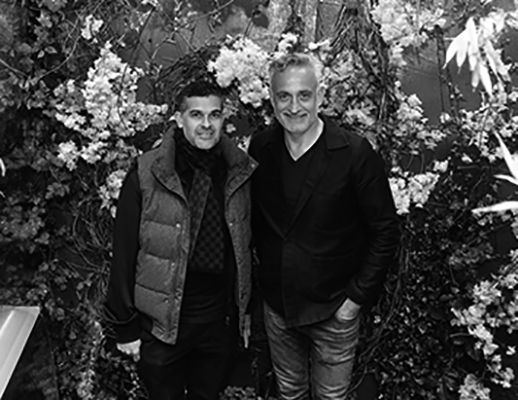 Philippe Collignon has been a landscaper, gardener and reporter-producer on France 2 for 25 years. Among other things, he is responsible for the gardening section on the programme Télématin and, as such, is well known by the public. He is also the author of Un potager pour les nuls (Vegetable gardens for dummies) published by First Éditions. He lives in Paris and gardens in the Eure-et-Loir département.

David Bitton is an architect and graduate of the Paris National Graduate School of Fine Arts, California Polytechnic State University and the Paris-Val de Seine Graduate School of Architecture. In Los Angeles, he worked in particular on renovating historic buildings and refurbishing villas designed by John Lautner and Franck Lloyd Wright. On his return to France in 2004, David Bitton established his agency DB Design where he works very closely with the plant world, his main source of inspiration. While he was designing garden scenery for the Jardin des Tuileries and carrying out interior design projects, he created his first lamp vase which he continues to develop using new LED technologies. For Paris Design Week 2017, he presented his new plant chandelier in the prestigious Maison Lachaume, a Master Florist since 1845. He self-produced this lighting concept, glorifying plants.