"As soon as the idea of the Deluge had subsided,
A hare stopped in the clover and swaying flowerbells, and said a prayer to the rainbow through the spider's web.
Oh! the precious stones that began to hide and the flowers that already looked around". Arthur Rimbaud, “After the Flood”.

If it ever happened that a place, an era, or a time was overcome by flood, then it was here, in this garden, that the meeting of plants and flowers took place.
Awkward or unlucky, all plants do their utmost to accomplish their work; all have the magnificent ambition of invading and conquering the earth.
Enclosed in and chained to the soil, their roots will resort to trickery, to combinations that the newly returned seasons will help them achieve.
This garden presents us with rebirth and renewal, suggesting the possibility of resurrection. Its flowers burst forth like the accomplishment of a quest where the Grail is not a cup but a bouquet! Almost a last bouquet to the Flood that has passed.
The ground’s smooth surface highlights the reawakening of nature, of the moss that has taken over the emptinesses left by the quake’s upheavals, of the ferns reaching their fronds towards the sun, of the clumps of moss scattered with little white spots, like flowers without roots.
And then, the ground buckles, the column cracks, the roots have resisted so long, hidden away beneath the concrete paving… and the bouquet bursts forth! Clutching at the steel framework, the flowers spill over it. Wisteria, morning glories and black-eyed-susans have taken on the colours of their existence to reveal themselves as survivors, to be smelled, looked at and touched.
It only remains for us to feel the power of flowers! 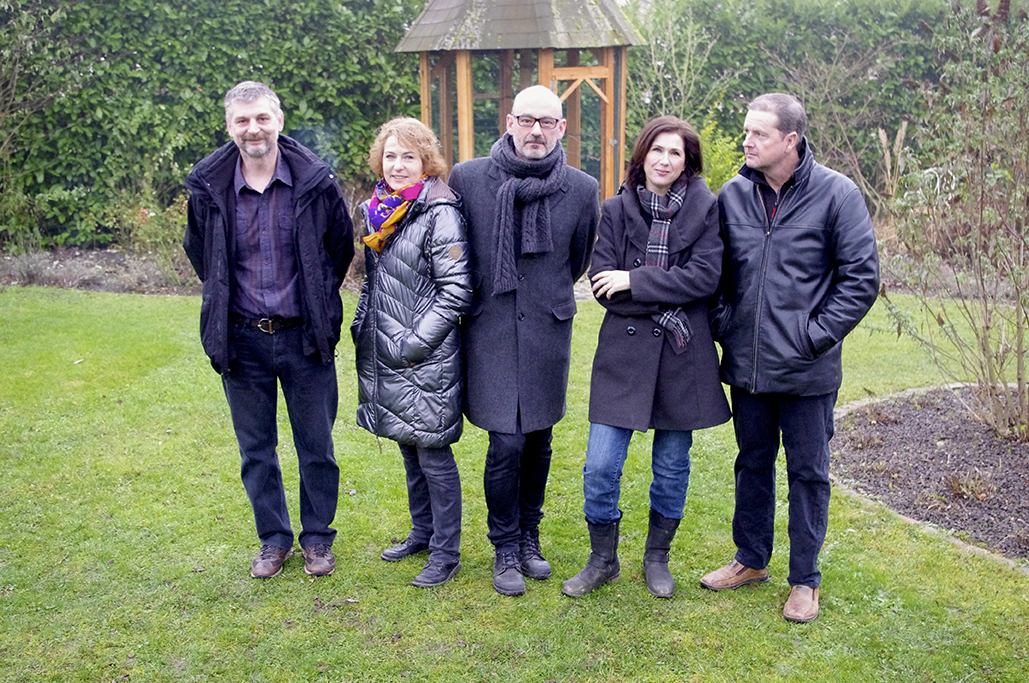 Born in Sarrebruck, Germany, in 1970, Alexandra Jansen is a garden designer and authoress, as well as being a gardening columnist for a wide range of French, German and Luxembourgian publications. She lives with her family in Hambach, working in collaboration with her husband Bruno Jansen, who oversees the implementation of her projects.
Although she had been a lover of gardens since her early childhood, it was not until she opened her own to the public that she began providing garden creation services professionally. Her garden is both a source of inspiration and her laboratory. It was there that Bruno and Alexandra organised the first edition of the “Arts and Garden” festival, an unprecedented combination of internationally reputed artists and the vegetable world. Visitors were won over and many of them called on her to design their outdoor areas. She started out on her entrepreneurial adventure in 2008. Since then, the festival, which is held in France, Germany and Luxembourg, has attracted tens of thousands of visitors.
Her own garden, which accommodates a private collection of some 350 rosebushes, attracted the attention of Michael Marriott (Davis Austin Roses’ right-hand man). His visit to Hambach was the beginning of a close friendship and lasting collaboration. From 2009 to 2014, Michael Marriott entrusted Alexandra with the creation and organisation of the David Austin presentation and ephemeral gardens at Château de Courson’s Garden Days.
There has been a succession of public and private commissions since she set up her company. 2009 saw her first collaboration with Michael Marriott, a small park (Espace Dietsch) commissioned by the Sarreguemines Confluence Agglomeration Community (CASC) in Moselle. In 2013, Domaine Thermal de Mondorf-les-Bains in Luxembourg commissioned her to create a rose garden; she brought together Michael Marriott and garden historian Marc Schoellen in the historical park laid out by Édouard André in 1886. A project bearing on a 15,000-m² surface area, and which Alexandra designed in close collaboration with Michael Marriott, in a Robinson/Jekyllian style. She acted as project leader from 2013 to 2016 and in June 2016 the garden was officially inaugurated by the Secretary of State.
Specialising in historical gardens, Alexandra Jansen also carried out a study of the 680-hectare Domaine Pescatore in Luxembourg, for Baron Michel de Maleingreau d’Hembise, and Château d’Alteville in Moselle, a project cofinanced by Lorraine Regional Council.
In addition to such large-scale projects, Alexandra Jansen has implemented numerous cross-border projects in France, Germany and Luxembourg, and her many collaborations with artists have enabled her to build a solid reputation in the world of Land Art.
A well-known lecturer, mostly on the theme of her Jardin sans soucis® and Jardin Haute Couture® creations (Alexandra’s creations and protected trademark), she is a much sought-after speaker to audiences of garden professionals and amateurs alike, expounding on their flowerbeds at Courson Plant Days, Chaalis Abbey’s Rose Days and Château de Pupetières in Isère, as well as for such events as the Républicain Lorrain’s “lectures by boat” and seminars for the Chamber of Trades in Germany. In 2009, one of her lectures won her a nomination for the title of “Woman of Influence” at Galeries Lafayette in Metz.

Born in Bitche (Moselle) in 1967, into a family of masons and stonecutters whose skills had been passed down from father to son for three generations, Bruno Jansen carries on the tradition. With a real love for old materials, he incorporates them into his creations, combining aestheticism and efficiency to perfection.
He and his family have lived in Hambach near the German border since the mid-1990s, where he started out as a construction entrepreneur specialising in old stone before going on to merge his company with his wife’s, to create the “Jardin d'Alexandra” in 2008. Since then, the company has extended its field of action in France, Germany and Luxembourg, including at the Domaine Thermal de Mondorf-les-Bains, where it was responsible for designing the rose garden. The 15,000-m² flower-filled scenography, created with the help of the Domaine Thermal’s gardening teams, was inaugurated in 2016 after three years of work. Bruno Jansen’s ingenuity, creativity and perfectionism have made his reputation.
Since 2008, Bruno Jansen has managed the “Arts and Gardens” Festival, which has attracted tens of thousands of visitors from Lorraine, Germany and Luxembourg. He also enriches his work by contact with artists, who influence his constructions: creations the stonecutter signs with the aid of ammonites borrowed from his private collection.

Born in a little Portuguese village in 1966, Carlos Esteves Duarte is a State-registered (DPLG) architect and a graduate of the Strasbourg School of Architecture, where his end-of-study project bore on restoration of Château de Louvigny in Moselle. He has lived in France since early childhood, originally in Haute-Savoie; he and his family now live in Hettange-Grande in Moselle. After spending a few years working in the Lorraine region, he now works in the Grand Duchy of Luxembourg, at the “m3 Architectes” agency. He has worked on a wide range of urban development and housing and office construction projects, as well as on larger-scale projects such as the extension of the Court of Justice of the European Communities in Luxembourg, a project implemented by the architect Dominique Perrault.
He has also been involved in public life for over 13 years, acting as Deputy Mayor with responsibility for urban development projects in the municipality of Hettange-Grande, and has always had a passion for gardens. From the very first urban-planning work he undertook following his time at Metz School of Fine Arts, gardens have been a source of inspiration in his private and professional life alike. A true fan of the Chaumont-sur-Loire International Garden Festival, to which he has been a dedicated visitor for over 15 years, he has always striven to combine his three major interests – architecture, art and heritage – as he did in the project at Domaine Antoine Pescatore in Luxembourg, which involved restoration of built heritage along with reconstruction of a 19th-century garden.
A member of the Order of Architects of Lorraine and of the Grand Duchy of Luxembourg, Carlos Esteves Duarte continues to incorporate a richness born of such cross-border culture into each of the projects he participates in.

Born in Forbach, Moselle, in 1969, Michel Grimmer started sculpting at the age of 10. His passion for sculpture has never faltered and, after devoting a few years to sculpting wood and stone, it was quite natural for this native son of a steel region to start working with iron. It gave him all the freedom he had not found with other materials. Now he could weld, mill, model, and add various other materials such as crystals, steel and resin. Over time, his works have become increasingly monumental.
He is best known for his figurative sculptures, which have won him numerous prizes and awards, including the Paris “Arts-Science-Letters” Academic Society’s Silver Medal, the Grand Prix Minerva 2010, the Vittelius Bronze and, in 2015, First Prize at the Salines Royales (Royal Saltworks) in Dieuze. He has been invited to exhibit at a variety of venues across Europe, including the Centre Georges Pompidou in Metz, the Artlenster in the Grand Duchy of Luxembourg, the Gavitech Gallery in Berlin, the Sumbialys Gallery in Lyon, the Grand Palais in Paris and the Carrousel du Louvre. Much of his current work focuses on experimentation, seeking more contemporary forms and combining architecture with sculpture, with fauna and flora in particular as inspiration.

Born in Metz in 1966, Vero Reato studied product design at the Nancy School of Fine Arts before going on to obtain a Specialised Higher Studies Diploma in Digital Imaging (DESSIN) from the National Comic-strip and Image Centre (CNBDI) in Angoulême. She has worked in a variety of creative fields, from illustration to murals, painted decoration to restoration, and object design to sculpture. In 2013, her wish to create imperishable outdoor works led her to the use of a revolutionary building material, ultra-high-performance fibre-reinforced concrete. Its “flexibility” in implementation, mechanical performance and infinite possibilities for inclusion of other materials have enabled her to make the most of a unique, liberated creativity. She explores this “grey matter”, observing and producing highly sensitive offbeat works where mineral and organic merge into multiple cells in a “Béton de Culture” (Concrete of Culture). Mastery of this innovative material has opened the way to an original means of expression for creation of mural installations, paintings, sculptures and out-of-the ordinary household items. She has exhibited “Béton de Culture” at various venues in France, Luxembourg and Switzerland, including such contemporary art exhibitions as ART3f in Metz, Mulhouse and Paris, Résonances in Strasbourg, Maison & Objet in Paris, “De Mains de Maîtres” and Arts & Jardins in the Grand Duchy of Luxembourg; and in galleries including the French Arts Factory and L’Atelier in Paris, and the Ditzoff Art Gallery in Coppet, Switzerland.