This garden expresses an impossible pipe dream of modern-day people: that of getting back to our roots, returning to a lifestyle in step with a revitalised nature.

In a world with a constantly growing population and urbanisation, where nature's place is under threat, will the garden of tomorrow become a garden of cracks? It offers up an answer with a flourishing environment that restores to nature its rightful place in our everyday lives. It is structured like an apartment, following the lines marked out on the ground. As we wander through it, we stumble upon mirror-covered furniture – almost entirely hidden among the vegetation.
Each room is filled with plants useful for human consumption and activity, organised according to the original functions of each room: eating, sleeping, looking after...
In this space, Man's dominance over nature is reversed: the garden becomes a fertile fallow land free to thrive, in which the signs of human intervention fade over time. 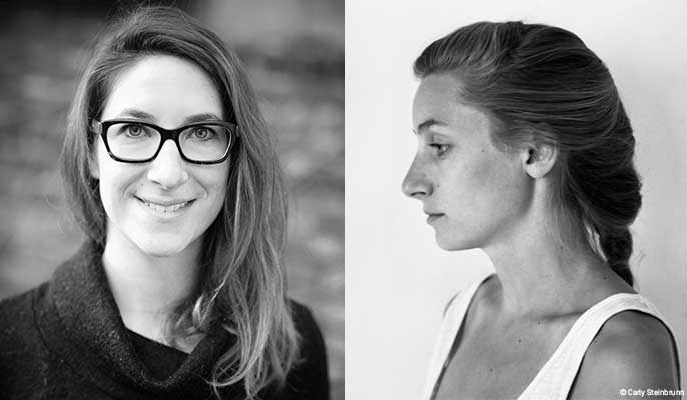 From left to right: Elodie Dauguet and Camille Baudelaire

Camille Baudelaire studied design at the Graduate School of Graphic Industries and Art and then at Duperré Graduate School of Applied Arts before completing her studies with research at Paris National School of Decorative Arts, where she undertook interactive installation projects including Corpus Motion (selected for the 2010 Bains Numériques International Digital Arts Biennial). Since 2007, she has been continuing cross-cutting research on images and their expression in space. She began with the "Form In Progress" project, exhibited in 2008 at the St Étienne International Design Biennial, and went on to fashion typographical sculptures for exhibitions in New York and Paris. At the same time she has set up her own multidisciplinary studio and works for cultural and artistic institutions as artistic director and graphic designer (Centre National des Arts Plastiques, Nuit Blanche, Orchestre de Paris, École Nationale Supérieure d'Arts de Paris-Cergy, École Supérieure des Beaux-Arts de Toulouse, etc.) and the rail industry (Alstom Transport) as colour & material designer for the international market alike. She teams up at regular intervals with artists, directors and choreographers of the likes of Camille Boitel, Boris Gibé, Yaïr Barelli, Julien Lacroix or the Collectif De Quark… as artistic director, filmmaker or set designer. Motivated by cities, architecture and landscape, she has also worked since 2014 with architecture firms (Forall studio, Est-ce-ainsi, etc.) as a signal graphic designer, artistic director and colour & material designer. In 2012 she produced a series of photographs on Chinese towns for the web documentary “In the mist of cities”, and in 2014 on the border town Cuidad-Juarez for the Collectif De Quark’s "Barbecues" project, particularly in liaison with Elodie Dauguet. In 2014 she put the "La cour bleue" project into practice for the BHV Marais and Citynove and since then has worked on an array of group projects with architects and set designers.

Elodie Dauguet is a theatre set designer who graduated from Lyon National School of Fine Arts in 2009. She works in Paris. She started out as assistant to the set designer Antoine Vasseur for five years, working on a wide range of performances, particularly with Ludovic Lagarde at the Comédie de Reims, as well as the set designer James Brandily on plays by Guillaume Vincent. She joined the Collectif De Quark for their "Barbecues" project, a three-year creative epic based on Roberto Bolano's book 2666, and this is when she met Camille Baudelaire. As a set designer, she has been working for the past three years alongside director Robert Cantarella on Eugène Labiche's La Station Champbaudet at the Evreux-Louviers National Theatre, Déa Loher's Anna et Martha, created at Montluçon's Le Fracas National Centre of Dramatics, Notre Faust, série diabolique en 5 épisodes created at the Théâtre Ouvert (Paris) and Christophe Honoré's Violentes Femmes, created at the Theatre of Nanterre-Amandiers. It was during this latter project that she crossed paths with the director Philippe Quesne, and teamed up with him on the Théâtre des Négociations project, a performance of the United Nations' COP21 process with 250 Sciences Po students. They have continued to work together on the creation Caspar Western Friedrich at the Kammerspiele in Munich, as well as the forthcoming Welcome to Caveland at the Kunstenfestival in Brussels in May 2016.