In a deafening din, thirty-three metres cubed of an inter-sidereal fragment have come careering towards us in the form of a seed of abundance, which has triggered a fertilisation process upon hitting the soil at Chaumont-sur-Loire.

A shockwave has been released on impact, deforming and cracking this soil and mixing into the soil substrate the very essence of the seed: generating an extraordinarily rich amalgam in ecological terms. This “plant-cum-metal” seed will now germinate, bringing this garden to life. Pieces from the germination process dot the pathway for visitors and, wherever they have fallen, the viable soil around has turned into thriving food plots. The heart of the seed holds the keys to the “garden to come”: it offers up new ways of anticipating production methods through scenes combining market garden plantations, tips for regenerating soil as well as new production techniques on varied media, sometimes pushing the boundaries of gravity and horizontality.
The garden unveils itself through four complementary realms. Air: architectural symbol of the seed's dislocation into multiple vertical and horizontal walls that are teeming with vegetables and climbers. Water: source of freshness and regulator of the atmospheric humidity. Soil: distributor of the wealth and diversity of the varieties grown by awaking the senses. Contemplation: passive and active wandering, learning and marvelling. 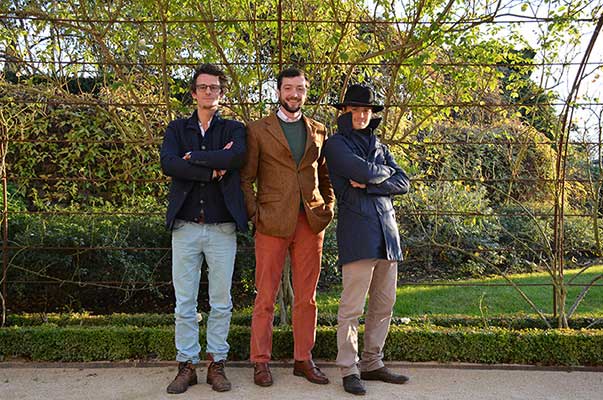 For Arthur de Vilmorin, plants are a family affair and the landscape a hobby. After working for several years as a gardener then a foreman, he decided to make this his profession and went back to school to develop his knowledge. Graduating from Le Breuil School of Horticulture in 2009, he is continuing his landscape studies at Bordeaux National School of Architecture and Landscape. He finds time to fit commissions around his studies, designing and overseeing the implementation of projects in France for households and companies alike. His skills and expertise encompass small urban gardens, such as on balconies or terraces, tips for cultivating plants inside homes, and designing or renovating major private parkland. In each of his projects, he endeavours to align the customer's request with the landscape project by incorporating it into its environmental setting. He is just as fond of materials as he is of plants, and strikes a balance between these elements. Aware of the technical constraints of upkeep, he strives to make sure this remains simple in his projects, weaving in a concern for ecology and the idea that a garden should be sustainable.
With relatives living all over France, Paul Leurent became familiar with different French regions at a very young age through all his travelling, and their landscapes came to matter deeply to him, along with the myriad "backs of beyond" nestling within them. Born into a generation in the grips of mounting environmental awareness, who must tackle the challenges of industrial society's adaptations, he sought to play a part in forging a more balanced relationship with the world and its inhabitants. He threw himself wholeheartedly as a result into the humanities, geography, biology, environmental sciences and garden art, and set his mind on becoming a landscape architect right from sixth-form college. After four years' experience in a company, he has lent a hand in some fifty different projects: private gardens, development of sensitive areas, residential neighbourhoods, patios, urban parkland and public spaces. He is currently studying at Bordeaux National School of Architecture and Landscape. Living organisms, science, energy, agronomics, agriculture, hydrology, architecture, urban planning and even economics now form his new work tools. In 2015, he wrote his final year dissertation on the local resilience of areas around Bordeaux, to try and paint a new picture of the region's fabric that sparks interest among local authorities. Upon graduating as a DPLG-qualified landscaper, he founded "2L Paysage", an engineering firm focusing on spatial design and planning with his work partner Romain Lacoste.
Tours, October 1985. Romain Lacoste decided to dive head first into life's adventures, driven by constant inquisitiveness. A quality for some, a character flaw for others, whatever your interpretation this thirst for knowledge has never left him and he never tires of unpicking the mechanisms of life, to understand how our environment is organised. This appetite for science in general seems to stem from Lacoste's family. With his father a geography and literature teacher, his mother a doctor and his grandfather a cabinetmaker, he has developed cross-cutting interests, ranging from how objects are made to understanding the lie of the land and drawing as a more tangible way of committing his thought to paper. Although automobile design and architecture were his childhood dreams, he took up geography and urban planning as higher education studies in 2003. During this time he developed a scientific approach to local areas, coupled with a cartographic perspective. With draughtsmanship forming the running theme through his Bachelor's degree, Romain Lacoste then enrolled in Bordeaux National School of Architecture and Landscape, which enabled him to turn his attentions to a more ethnographic vision of society. Through these studies, which gave him the keys to understanding and designing space, he was able to combine art and science. It has thus taken thirty years for a particular thought to take shape, the very same which has been briefly but sincerely expressed on the plot at Chaumont-sur-Loire, in partnership with Paul Leurent through their blossoming landscape firm. The "2L Paysage" firm resembles an iceberg  in that there is a visible, mobile part reflecting a commitment to help bring about new territories by transforming the way we consume, produce and inhabit, and a submerged part: a tool for intrinsically experimenting with the possibilities of tomorrow through competitions, private gardens and development projects.