We will all be gardeners in the society of tomorrow. Our furniture will be the trees; our business districts, the forests; our motorways, the rivers; our city will be nature itself and our planet, our garden.

In response to dwindling energy and resources, urban sprawl, the housing crisis and the unbridled spread of bio-uniformity, nature has ultimately extended right into our cities, as a living house or the garden of life.
The garden is no longer an ornamental setting, or palliative to our everyday stress: it is becoming our home, the place we will inhabit and where we will live.
La maison vivante is just as much our planet, when considered at global level, as our accommodation, when considered at individual level. The garden will no longer be confined, but will enter our homes to do away with the usual separation between indoors and outdoors.
Through the different rooms of the living house, you will see the inside of a simple "gar-banite", planted humbly and patiently, in the image of what the people of tomorrow must become: a cross between gardeners and urbanites.
Take off your coats in the “cloakplant” then sit down at the living room table for a bite to eat under the flying casserole dishes and levitating cooking pots. Come and lend a hand whisking up delicious mixtures if needs be. Once you've eaten your fill, fall under the spell of the vegetation which filters light through into the sleeping alcove, for a perfect night's sleep. In the morning, have a shower in the watering room and indulge in the comforts of the gardens of tomorrow. 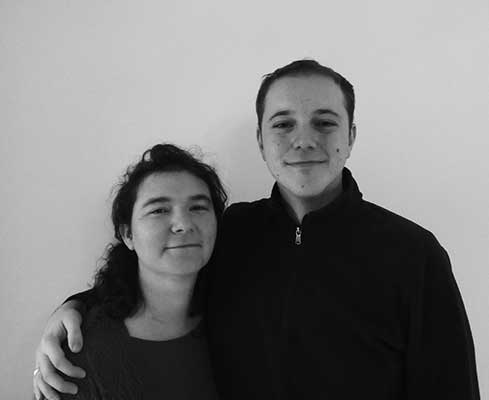 Emilie Garnier
"As the daughter of a farm producer and psychomotor therapist, I spent my childhood in a small Saintonge village in Charente-Maritime. This rural environment first awakened my interest in landscape. After a stint at the Versailles National School of Architecture, in 2005 I enrolled in the Versailles National School of Landscape. When I graduated in 2009 my interest was piqued by rural challenges during a project on oyster-farming landscapes in the Marennes Oléron basin and their fates. After graduating I worked in several agencies, especially with Jean Mus & Co. in Grasse. During this period I designed private gardens in the Côte d’Azur at various scales, and I was able to gain a fine grasp of details and finishes as well as a love for growing vegetables. In 2014, I moved to Lille where I set up my own firm, Carré Terre. My first projects address various landscape dimensions: wind farm studies, project management purely speaking and design of private gardens".
Barthélémy Affres
"I graduated as a landscaper from the Versailles National School of Landscape in 2009, and my diploma, entitled "When forest becomes city" was already a theoretical attempt at merging the city with the forest, sketching out a different type of urbanity for the Parisian region at a time when ideas about "Greater Paris" were abounding. I then moved to Lozère to understand the notion of "sweeping landscape" and get a handle on rural challenges. This episode was another way of broaching the city and urban density at the opposite end of the scale, with the ultimate observation that many urban and rural forms of behaviour are similar. I then moved to Lille in 2011, where I have since been working for the Leblanc-Vénacque firm on urban development projects. Grappling daily with the many challenges facing the city, I have not lost sight of gardening for all that. That's why I keep a regular eye on making sure this dimension is taken on board in my professional - whenever possible - and personal projects alike".