le bois des chambres
Ticketing
Edible eccentricities, vegetable intoxication and an overdose of sugar-sweetness: make your way into this fairy-tale world and spend a few minutes of pure pleasure lingering in its magic kitchen garden! Here, simple ornamental flowers take on outrageous forms, comestibles become pure extravaganza, and rare vegetables raise their voices and are heard – a world composed of plants cast against type and brought resoundingly back into style. Classic vegetables taken on absurd dimensions and forgotten varieties are returned to their former glory.
The tone is set by the tunnel at the entrance, woven from climbing plants – green beans and cucumbers, passionflower and honeysuckle. The garden’s flowered heart is guarded by a fairy in an apron! Extravagance reigns supreme wherever you look – giant artichokes and leeks, magic pumpkins, crazy overripe gourds and unsuspected earth apples and celeriac, all planted in the shade of highly implausible cabbage palms. Grandeur and sensory derangement are also given full expression in the sweet varieties – plump melons, butternuts, winter cherries, strawberry plants and currant bushes.
A madness of mixes, pure gluttonous unreason – the key to these combinations is to be found behind a multi-coloured and highly intriguing wall of recipients! Nasturtium jams, marrow cakes, cabbage with coconut and green beans in crinoline are no longer the results of madness unchained – for here grows the recipe tree! Off the wall, forgotten and audacious, the compositions thought up by chefs in love with their art hang from this vegetable monarch. Anyone can seize upon them, plagiarise them, turn them on their heads or copy them, each to their own private delirium, spreading vegetable madness wherever they go! 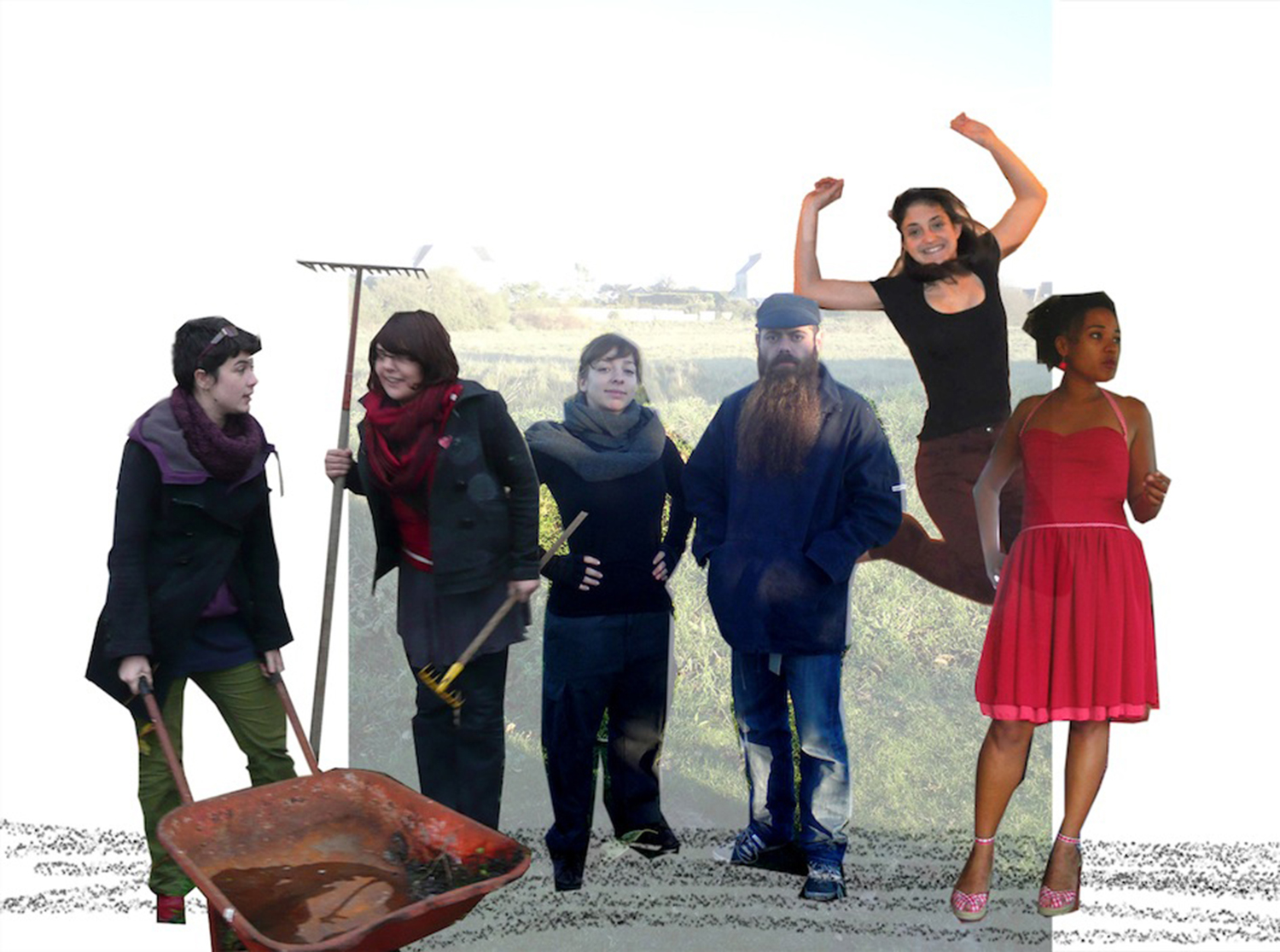 Aline Gayou is a young DLPG landscape architect who graduated from the Lille ENS (AP) in July 2011. A true backpacking landscaper, she divides her time between projects focusing on illustration, artistic installations and territorial development. Such versatility is reflected in her background: a native of Limousin, where she studied applied arts at Lycée Raymond Loewy, she went on to take a BTS (Higher Technical Certificate) in area design at Orleans, then deepened her interest in art and public areas at Lyon’s School of Fine Arts before completing her landscaping studies in Lille and starting off her career at an architectural agency in Limoges.

Mathilde Coineau is a native of La Rochelle and a 4th-year student of landscaping at Lille’s school of architecture and landscaping. After obtaining a scientific Baccalaureate, Mathilde turned her attention to applied arts, taking a course in Toulouse which raised her awareness of the various areas of creative activity, landscaping in particular. She decided to study landscaping because of the diversity of the fields it incorporates (art, technology and history). Mirroring such multidisciplinarity, she likes to vary her activities. Much involved in the school’s associative life, she has taken part in such cultural events as “Les Fenêtres qui Parlent” in Lezennes and in deliberations on land-use development in Palestine.

Marion Delage, visual artist and contract plastic arts teacher for the Nantes education authority, graduated from the Graduate School of Fine Arts in Valenciennes in 2009. Her major interest is the history and allusiveness of the 18th-century cabinet of curiosities – a microcosm whose purposes and inspiration must have been one and the same, an attempt to unravel secrets long buried away… a world in miniature, the myth of cosmogony. Nature, or the microcosm as she understands it, is nothing other than the woman, the mother, the womb, bearer and progenitor of all curiosities. She gives expression to her questions through volume, casting and ceramics, and pictorial art.

Etienne Rivière is a visual artist who graduated from the Valenciennes Graduate School of Fine Arts in 2009 and now lives and works in Nantes. His work is mainly sculptural, akin in atmosphere to the urban, the construction site and the streets, seen as repositories of transitory states, more or less well-defined areas. Such spaces in movement, set in motion by a laborious energy – the notion of an enclosed creative space – inspire him.

Pauline Bertin is an architect currently studying for an HMONP (licence to practise project management under her own name). Her educational and professional pathways have taken her places to say the least! Lycée years followed by years spent exploring the field of applied arts in Nevers, where she acquainted herself with the world of creation, plastic expression and installations. She climbed the ladder rung by rung, and a BTS in area design brought her into contact with members of the garden team in Orleans. Work on interior and exterior areas followed, and she then enrolled in a school of architecture where she become particularly interested in the sites themselves and in the placement of projects in their contexts. Going on to attend schools of architecture in Strasbourg, Brisbane (Australia) and Paris, she branched out, making her own choices, that of landscaping in particular, and now seeks to have a multiscalar and multidisciplinary “project” approach. Her professional life kicked off at a landscaping and town-planning agency in Paris. With a true passion for Land Art, photography, DIY and travelling, she has now well and truly launched herself into the “active” life.

Laura Yoro is a young costumer whose wide range of interests also qualifies her as visual artist, performer and researcher, with audaciousness, ingenuity and insatiable curiosity in evidence among her many character traits. Laura’s activities take her well beyond her first love, the theatre, and she put her talents to good use in the worlds of cinema, music, contemporary arts and fashion. Such versatility is at the heart of her career path; after studying applied arts in Paris, specialising in fabrics and costume design, she took a Master’s in “costume materials” at the University of Lille 3. Since then she has been crossing from one artistic sphere to the next, creating dresses, costumes and sculptures as her commissions take her.