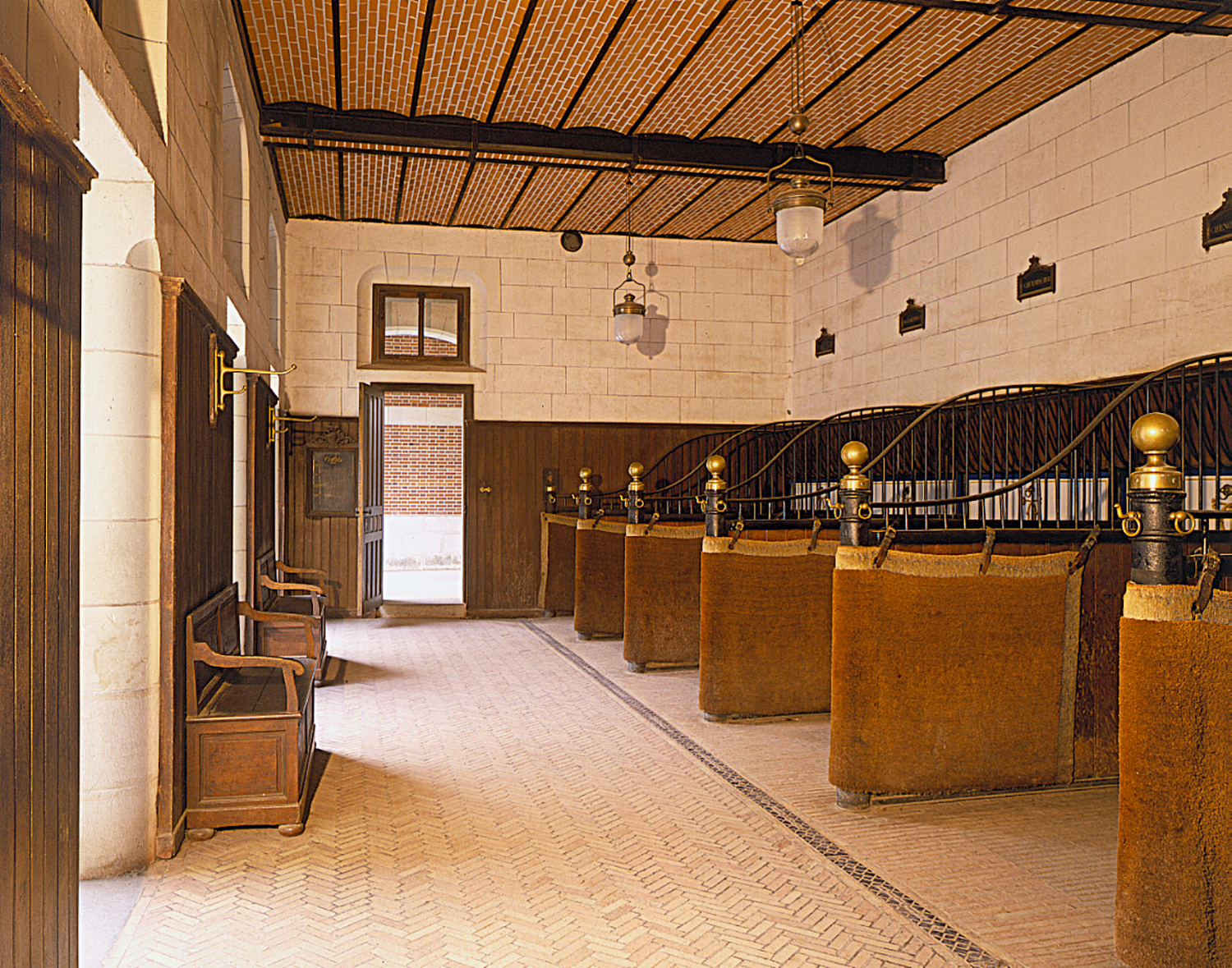 The so-called “half-blood” stables accommodated carriage horses and are made up of stalls in which the animals were tethered when not in harness. The building’s interior layout has remained unchanged since 1877: stalls, cartouches inscribed with the horses’ names, benches, cast-iron mangers and drinking troughs topped by multicoloured enamelled cast-iron plaques, brass balls and hooks, and arc lamps. Wooden partitions are hung with brush matting to prevent horses from injuring their flanks. An orders panel set in a carved wooden frame on the stable wall lists the tasks to be carried out at each hour of the day by the grooms and stable-boys.

The carriage-horse stable is followed by the saddle horses’ boxes. As purebloods kept for riding purposes are more highly-strung than carriage horses, each had its own box and was left untethered. The walls were originally covered with varnished wood paneling, but this was removed in the 1950s. The low doors were covered with protective carpeting to ensure that horses would not injure their knees. A narrow-vaulted gallery behind the boxes and invisible from outside enabled staff to make their way more easily to and from the carriage-horse stable’s kitchen.

The kitchen and working saddlery

The great courtyard also serves the kitchen and working saddlery. This large room, paneled on three sides, was both a working saddlery where, in wintertime, the men saw to the driving harnesses after each use (dismantling, washing, drying, greasing and putting them back together again) and a kitchen where the horses’ “mash” (food composed of cooked cereals) was prepared. Two arc-lamps, originally in the hall and similar to those at the Opéra Garnier and Paris Town Hall, evidence the stables’ modernity – they were equipped with electric lighting in 1898. 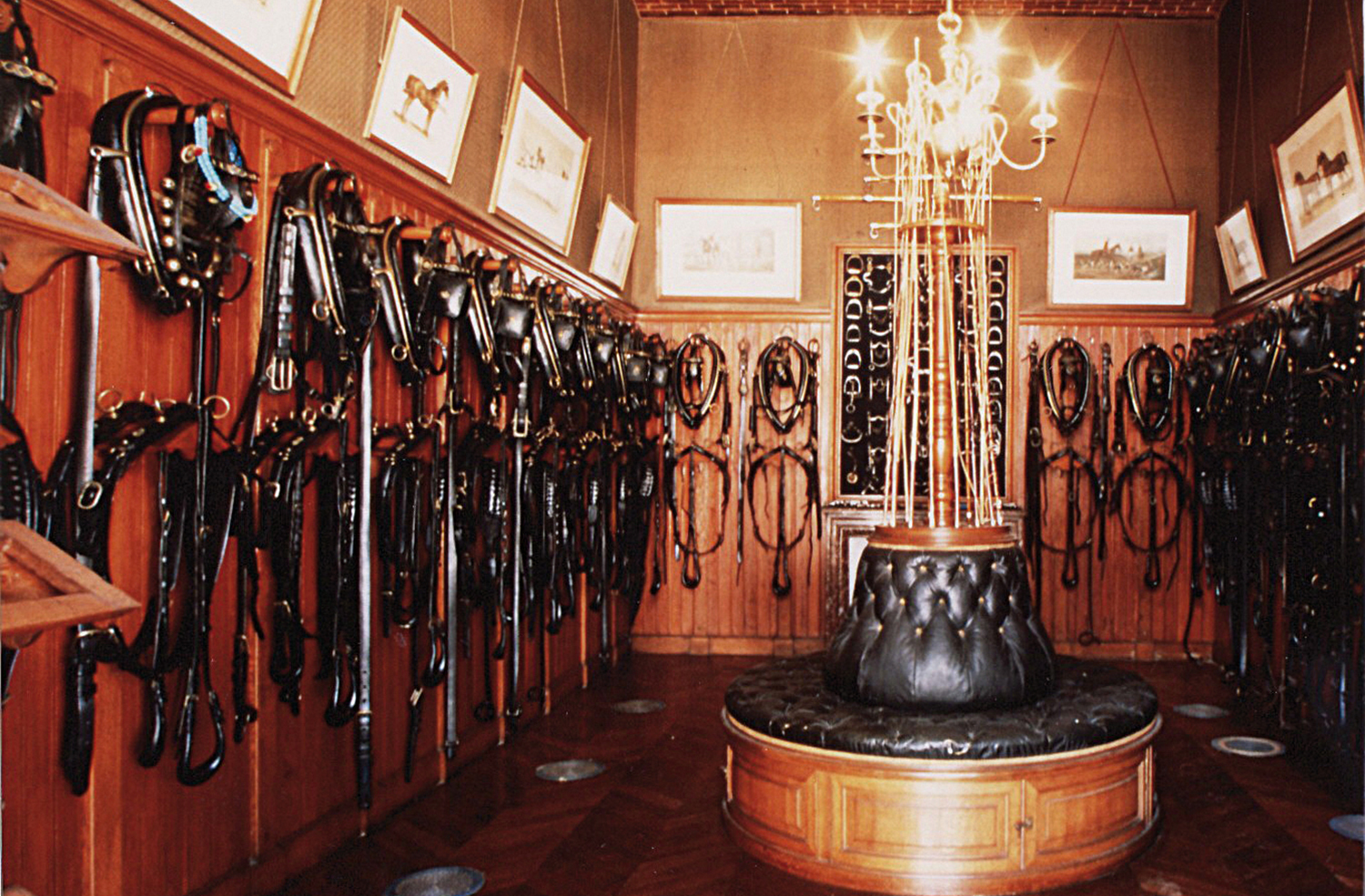 Adjoining the working saddlery is the gala saddlery, now regarded as one of the finest saddleries in France. It has remained unchanged since the latter years of the 19th century and boasts a major collection of driving harnesses, irons and whips. All harness and saddlery equipment is the work of the greatest firms operating in the 19th century, including Hermès, Clément, Adler and Adam. The harnesses hung all around the saddlery, whether sporting harnesses with breast-girths and bells, gala harnesses with gilded-bronze-ornamented English collars, pony, double or single harnesses, are presented in line with the traditional manner of arranging these cumbersome and complex items. 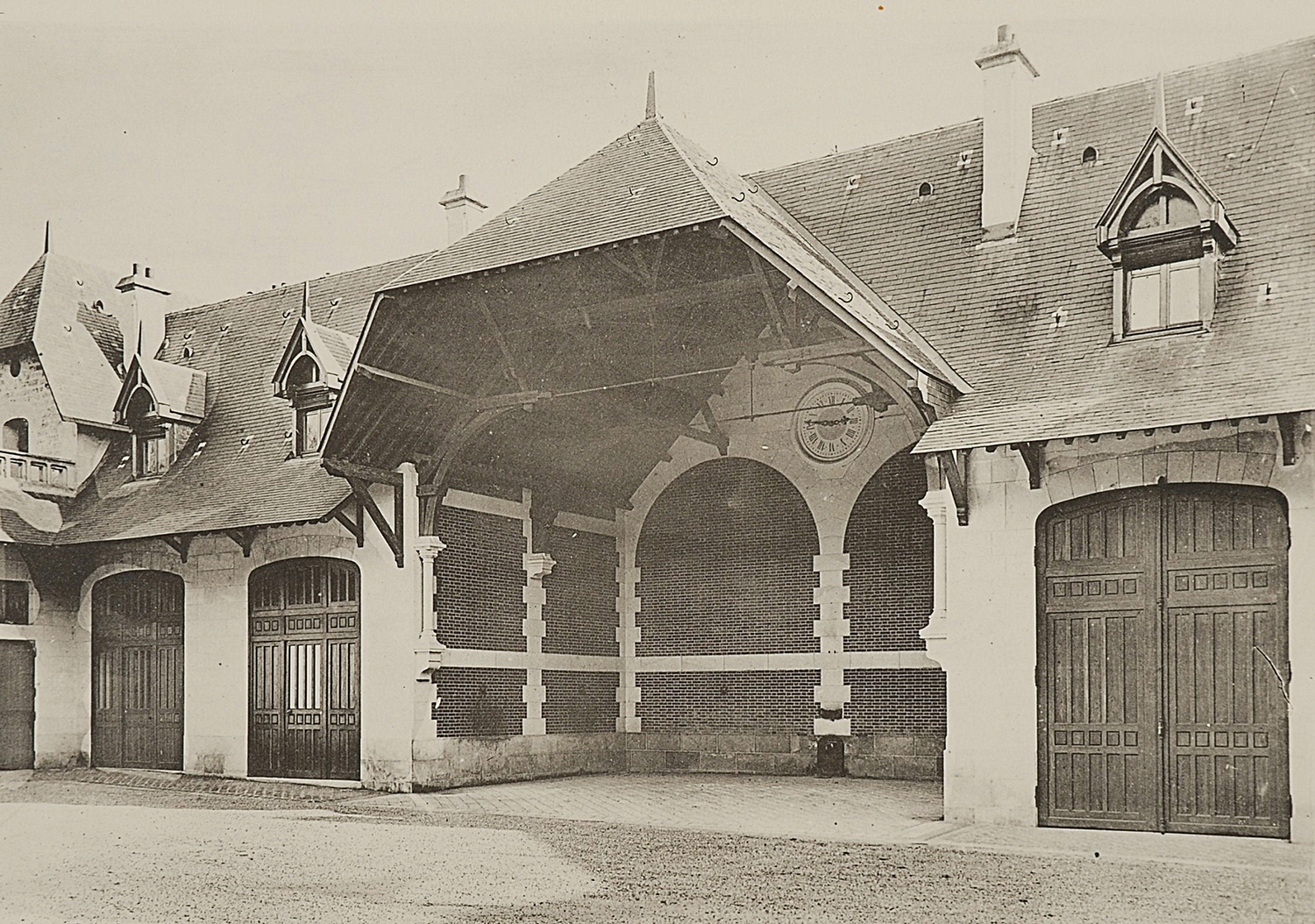 Its central position and imposing dimensions make the hall the heart of the stable. Its wide roof provided shelter whatever the season, making the men’s work less arduous. Vehicles were washed there after use and horses showered, and the farrier set up shop there to shoe them; horses were tethered there to be strapped into harnesses drawn from the adjoining saddlery. All activities (grooming, brushing and saddling horses and dressing them in their livery) were governed by the turning hands of the clock, and the orders panel gave each member of staff (groom, postilion, coachman, stable-boy, etc.) instructions on what they had to get done during the day. 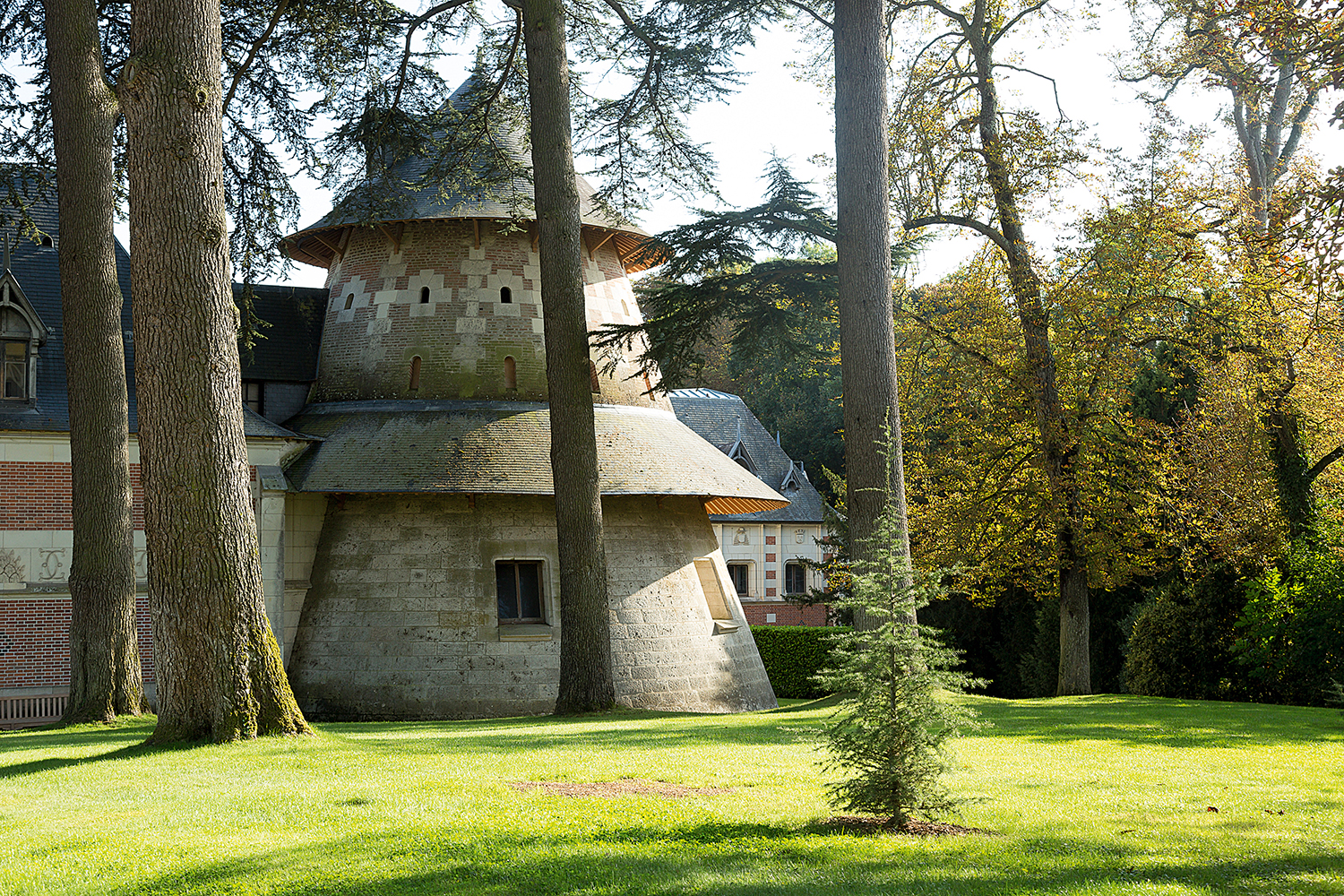 A small indoor riding arena occupies one corner of the courtyard; here, horses could be put through their paces on a lunge line under the eye of Prince Henri-Amédée de Broglie and his guests, seated comfortably in the galley overlooking the track. To build the arena, the architect Paul-Ernest Sanson reused the substructure of the pottery and glassware oven attached to the factory set up by Jacques-Donatien Leray. Only the walls above the visitors’ gallery once belonged to the oven, as the floor level has since been lowered. The lower sections of the wall are Sanson’s work, as is its candle-snuffer roofing. 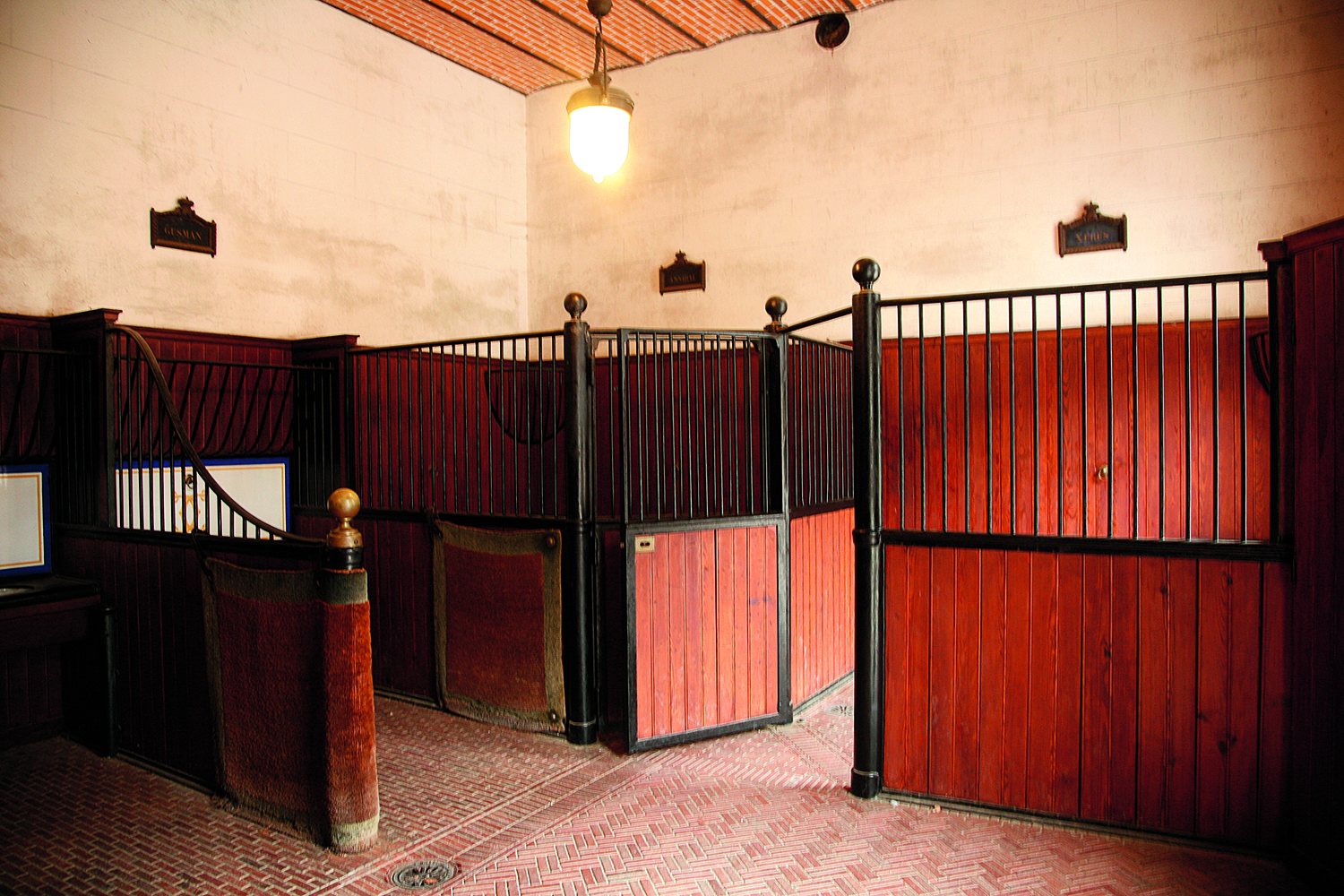 The pony stable comprises four boxes occupying the stable yard’s corners, along with three stalls set between the two boxes on the north wall. Preserved in its original state, with paneling, removable partitions, mangers and hayracks, this amenity provides the same luxury as the carriage-horse stable. The only difference is that the boxes close individually, their doors equipped with safety systems making it impossible for the ponies to open them and preventing the animals from injuring themselves against the handles.