Ticketing
The series of photographs and texts presented by Henry Roy this winter is the result of a long artist residency at Chaumont-sur-Loire. Henry Roy has been able to explore the Domain in every season and to capture its changing yet constant poetry with his unique eye.
CHAUMONT SUR LOIRE – Animist portrait of a chateau, its outbuildings and its park
“We are all the fruit of an encounter.
Two worlds that are seen as contradictory merge within me.
That of ancestral France, which has cultivated admirable know-how over the centuries, and that of Haiti, a country of magical realism and wonder, born of the tragic combination of the colonial system and a tortured Africa.
As a child, I visited the Loire chateaux with my primary school, impressed by these treasures from the past, I couldn’t find my place in this history.
At the same time, my parents instilled in me, through their presence alone, the Afro-Caribbean heritage of their lineages.

This portrait of Chaumont-sur-Loire is a poetic way of embracing this dual filiation. The exhibition of numerous artworks, the mastery of the aesthetic and the pomp that give the Domaine its splendour, are confronted with the manifestations of inhabited nature, governed by secret laws, inaccessible to all forms of rationality.

To make this portrait, I pledged allegiance to these laws. Keeping myself, during an intermittent residency, attentive to this French nature, I immersed myself in the rhythm of the seasons, the fluctuations of light, clouds and winds, and submitted to chance’s antics. Ignoring the fever of our time, I opted to stroll, with the introspective calm of meditation. I gave myself the freedom, the ultimate luxury of relying only on the radar of my feelings throughout this inner journey.
Along the way, I honoured the spirits of plants, stones, water, earth and sky, before going to greet the ghosts that haunt these places.

I engaged in the rituals of an invented religion, a ceremony, a psycho-magical act, like a form of incantation addressed to the healing forces of our devastated planet.

As Salvador Dali did, in his time, with Perpignan station, I placed Chaumont-sur-Loire at the centre of the universe.” Henry Roy (journal extract) 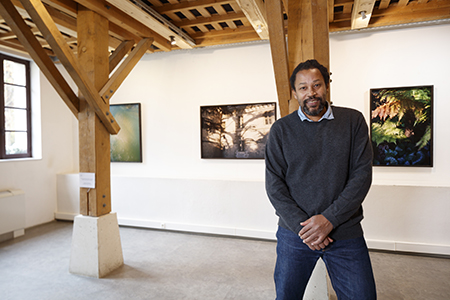 After studying photography in Paris, he began a career as a journalist. In 1996, he published Regards Noirs, a book of portraits – inspired by photographers like Richard Avedon and Irving Penn – dedicated to leading black French figures.

In 1998, he became a contributor to Purple magazine, starting a collaboration that would last over 10 years and have a major influence on his style.

For many years, he has been developing a body of work that takes the form of a narration which he calls animist. Combining recollections, fantasies, intuitions and observations, his unique approach unsettles the interplay of appearances by inventing a world steeped in mystery and spirituality.

His portraits and reports have been published in magazines like Vogue Paris, ArtReview, M Le Monde’s magazine, W Magazine, Harper’s Bazaar UK, Air France Magazine and AD, to name but a few.

He has also collaborated with literary reviews like Edwarda, Possession Immédiate, Purple Journal and Intran Qu’îllités.

His other solo books Out of the Blue, Spirit and Mirage were published in Sydney, New York and London respectively. The New York Times chose his latest book, Superstition (published by Études Books, Paris), as one of the 10 best photo books of 2017.

Henry Roy is represented by L’Agence à Paris (Paris) and the Sunday Gallery (Zurich). He lives and works in Paris.