“UV ” is a garden that plays with the limits of colour perception. Various shades of purple lead the visitor through leaves and flowers towards the end of the visible spectrum. After expressing the beneficial effects of ultraviolet through photosynthesis and of its chromatic variations, the non-colour pavilion forms a laboratory of the invisible. It changes and neutralizes your perception of colour before going on to highlight the harmful effects of being exposed to ultraviolet light. Beds that are sparsely planted and overexposed try to survive in spite of the dryness and depigmentation. As a symbol of the need for ultraviolet light and the threat it poses for the environment and for humankind, a protective sun screen creates an ever-changing dialogue between photosynthesis and drought, between colour and non-colour. 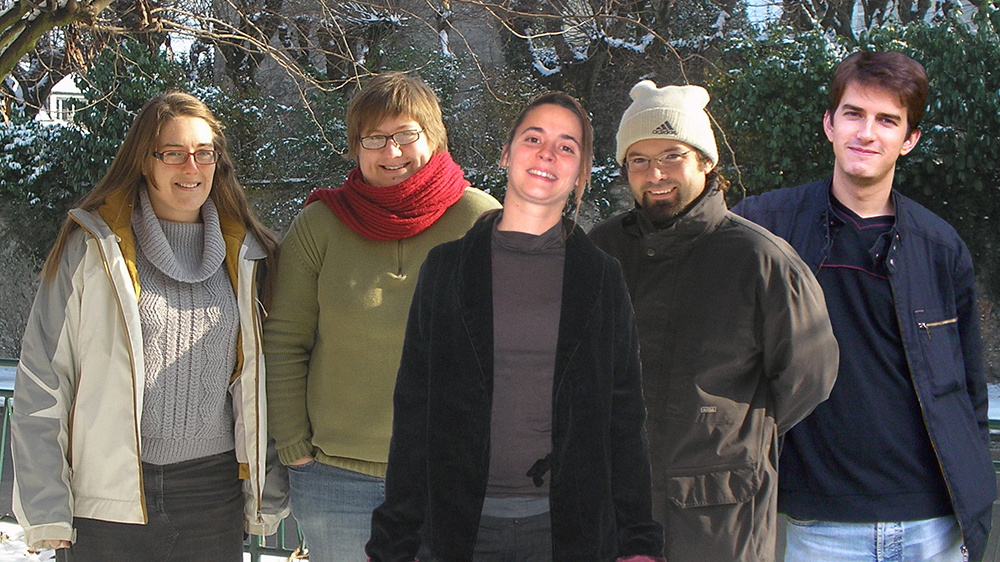 Marie-Tiffany Hamon-Delgado, young architect and team representative, works mainly with wood as much for private customers as she does local authorities. Her passion for wooden and sustainable construction took her to Austria to the Baumschlager&Eberle office where she carried out her work experience before graduating from the City and Region of Marne-La-Vallée School of Architecture. Back for 2 years in Beaugency in the Loiret, her successive visits to the Festival largely contributed to her decision to take part in the Chaumont-sur-Loire competition.

DPLG (government approved) architect, who graduated from the City and Region of Marne-La-Vallée School of Architecture, Florence Motte works for the Dusapin-Leclercq architect’s office in Paris, while also working freelance.  This job in an architect’s office allowed her to work on large scale projects such as the sustainable development urban planning competition at Joué-Les-Tours (project manager). However, what fascinates Florence most are the reflections based on more conceptual projects, on a more restricted scale, thanks to her participation in competitions open to freelance architects. Her taste for nature and for the small scale, in particular, guide the execution of her « Jardin Rural » (Rural Garden) project which she has been managing since December 2007 in the town of Vieillevigne (31), and similarly influence her leisure activities with cycle touring.

The youngest member of the team, Anne-Elise Hamon is a young graduate of the Planning Department of the École Polytechnique de l’Université de Tours. The multidisciplinary nature of her studies as well as a one-year stay in Portugal enabled her to take an interest in different development themes, in particular European urban development, but also architecture and the environment. Her participation in the Chaumont-sur-Loire Garden Festival is a real opportunity to get started in professional life and to work with a team full of ideas and diversity.

Pierre-Alexandre Marchevet is a DPLG landscape architect (government approved) who graduated from the Ecole Nationale Supérieure du Paysage de Versailles (Versailles National School of Landscape Architecture) in 2006. After working with the Latitude Nord office in Maisons-Alfort (94), he now works with the OKRA landscape architect’s office in Utrecht in the Netherlands. He works on landscape and public space projects in the Netherlands (Vlissingen, Rotterdam) and abroad (Luxemburg, Manchester, London, Antwerp, and Copenhagen). As a prelude to the festival, he created “Interior Garden(s)” in 2006 and 2007, two educational short-lived landscape projects and installations in collaboration with the designer Benoit Fournier-Mottet for the public of the Transmusicales in Rennes.

Native of Region Centre, Eric Gentils has always been very drawn to nature, whether in relation to his leisure activities in fishing or his choice of education by studying for an agricultural BTS at the Institut Rural du Loiret (Loiret Rural Institute) and specializing in Ornamental Plants. Currently working for the Parks and Gardens Department of the city of Beaugency as a qualified technician, for him, this participation in the Garden Festival is an opportunity to let loose his creativity and to distinguish himself amongst his peers.