In 2013, the great architect and landscape architect Yu Kongjian is installing a lithe red ribbon at Chaumont-sur-Loire, teasing the landscape and prompting visitors to stop and contemplate while resting their limbs. This rounds off all of the Chinese gardens of Prés du Goualoup, designed in 2012, including the Hualu, Ermitage sur Loire garden created by Che Bing Chiu and Le jardin des nuées qui s'attardent by Wang Shu, who won the Pritzker Architecture Prize in 2012.

This small rain garden, Carré et Rond (Land and Sky), is a contemporary re-interpretation of Chinese Traditional Gardens, that integrates the contemporary concept of stormwater management with the Chinese gardening philosophy about man and nature, the formal language of curvilinear and square, the spatial experiential strategy of enclosure and making small into big, and the building technique of cutting and fill.

Traditional Chinese garden recreates natural landscapes in miniature. Typically built by scholars, poets, and former government official, the garden is always enclosed by a wall and has ponds, rocks, trees, flowers, and assortment pavilions that are connected by winding paths. Through a series of carefully composed scenes, the traditional Chinese garden becomes a replica of nature in miniature, "an artificial nature" intended for daily use. 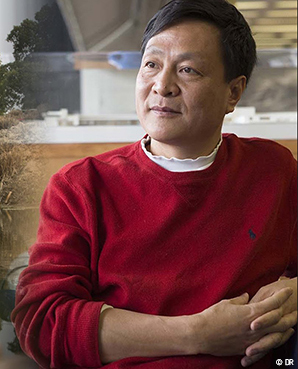 Born into a peasant family in the province of Zhejiang, in 1980 Yu Kongjian enrolled in the Forest University of Beijing and naturally chose “landscape” as his major. He spent a few years studying in the Chinese capital before heading abroad. In 1997, upon his return from the States with a PhD in design from Harvard under his belt, he set about founding the first school of landscape which would open in 2003. Having founded the prestigious agency Turen (whose head office is situated in the Chinese capital), he now heads up the Landscape Department at Beijing University. He is also Chief Editor of the Landscape Architecture magazine.

Yu Kongjian gives fresh interpretation to the fundamental concepts of the traditional Chinese garden, such as feng shui, in which he is an eminent specialist. As a major landscape gardener and architect who is gravely concerned about the ecological problems facing his country and aware of deforestation, the drying up of water tables and destruction of farmland, he advocates exquisitely beautiful contributions to the landscape that are entirely environmentally friendly, where humans once again occupy their rightfully sized place.