Ticketing
Here, in a space closed in on itself, water is an idea that can do everything. Hence, its absence does not stop it from providing a powerful evocation of majestic lakeside landscapes. You must first of all cross a burnt wood trellis in order to access a cathartic, meditative walkway. It marks the entrance to a universe in stark contrast to the hustle and bustle of our world. Conjuring up a sense of lightness, a natural wood pontoon bridge extends over a stretch of plant life echoing the colours of waves: blue, mauve and white flowers shimmer at your feet, replicating the movement of water and lulling the eye. A little farther on, a platform emerges from the plants. A dive into the perennials and grasses takes you to it. A metal bathing ladder invites you to climb aboard, and you can finally lie back and dream as you drift away on this imaginary raft.
The ideal garden is a place for observation, listening to the murmurings of nature, the rustling of grass in the wind, the humming of insects, the crackling of leaves as a lizard scurries over them… All such echoes gather there, for those who take the time to appreciate them. 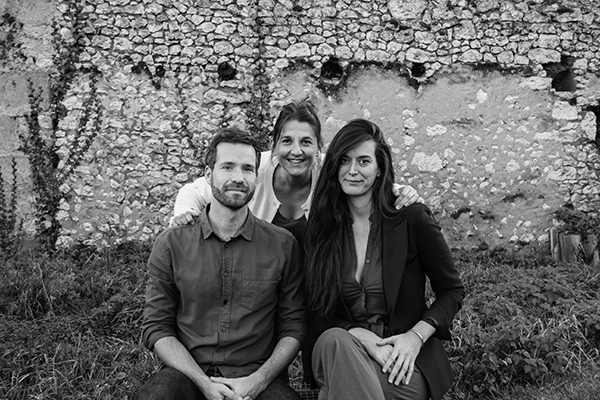 Pauline Larivière is a landscape designer. She graduated from the Bordeaux National Higher School of Architecture and Landscape in 2012, the institution where she had obtained a degree in architecture four years earlier. Throughout her student days and during her first years in the profession, she honed her skills at agencies in Bordeaux and on Reunion Island. Her varied experience has enabled her to acquire and add to her knowledge on the study and implementation of public space projects. In April 2015, as a lover of nature and plant life, she set up Atelier Septembre with a view to communicating the love that has inspired her ever since her childhood days. Lively, sensitive and meticulous by nature, she finds fulfilment in the creation of landscaping projects and floral scenography for events. She leads you into the heart of a wild, poetic universe, where burgeoning plant life is tamed in order to serve moods and emotions with the ultimate goal of bringing added sparkle to gardens and events. She grew up in the country and carried out her first experiments in the family garden, some of them more successful than others but always embarked upon with growing curiosity and wonder. These days, it’s in her own garden, a true open-air laboratory, that she learns, experiments, and continues with her practice by implementing landscaping projects in situ.

Marine Lecardeur is a landscaper who graduated from the Bordeaux National Higher School of Architecture and Landscape in 2013. Her studies there provided her with the opportunity to carry out numerous internships in multidisciplinary agencies across Metropolitan France, as well as on Reunion Island and in Montreal. After she graduated, she spent the first years of her professional career at an architecture agency in Montreal, spending most of her time participating in project management of public spaces, schoolyards and architecture competitions. Along with her Montreal collective, she experimented with reuse of building materials, creating and envisioning ephemeral installations in the public space. Following her return to France in 2016, she worked at the Mutabilis agency in Paris, where she acquired extensive experience in the various phases of studies, from the competition/outline stage to the final tender documents (DCE). In November 2018, she joined the Base Bordeaux agency, participating in various stages of its projects, including preliminary studies and feasibility studies on public spaces and their intended use, as well as in more operational phases, and was also responsible for site supervision in project management projects. She embarked on a new adventure in mid-2021, setting up as a freelance landscaper and illustrator and creating Ublo. She developed her illustration and drawing techniques in parallel with her professional activities and they have become a true medium, a language for communication. Envisioning and providing the image of what she has envisioned – that’s her objective these days. Alongside the development projects she’s involved in, she likes to illustrate the landscapes she passes through, all of which have stories to tell of their own.

Matthieu Saunier-Court is an architect who graduated from the Bordeaux National Higher School of Architecture and Landscape in 2011. During his studies there, he contributed to thought on urban development of cities along the Atlantic coast, in La Rochelle and Royan. Such thoughts were also shared in the context of the A6A architecture student association, with which he broached his first architectural projects in Bordeaux. He went on to spend some ten years working with a number of architecture agencies in Bordeaux (Brochet-Lajus-Pueyo, Baggio-Piechaud, and Marjan Hessamfar & Joe Vérons architectes associés), tackling a wide variety of projects from design in public competitions and private feasibility to creation during site supervision, via all study and tendering phases. The experience he gained has enabled him to take part in and lead projects of varied scales and types, including multi-family housing, wine production facilities, school groups, a hospital and a multi-use hotel, business and tertiary complex. With all this experience to his credit, he has been working under his own name in Bordeaux since October 2021.