le bois des chambres
Ticketing
Located on the 47th parallel north, this garden is an anthem to the colour blue: cobalt, sky blue, cerulean, peacock blue, cyan, clematis, iris, Tiffany, Klein and Guimet’s ultramarine… laid out for all to see, in monochromes of plants and water.
And if you’ve got the blues, remember that clouds always cover a blue sky… Bleu 47° is the garden of optimism and love of life! Its alcoves, in which visitors lose themselves only to find one another again, make it a playground for dalliance and flirtation for the romantics among us, or a chapel for meditation and prayer.
Like a mosaic or a tapestry, and in the footsteps of such artistic trends as impressionism and pointillism, a labyrinth winds its way to a succession of gazebos celebrating nature. Invitations to sit back and contemplate the water and plant life.
A link between earth and sky, between our blue planet and the azure heavens, Bleu 47° transforms water into stained glass, set in a specially designed vertical structure, and plays with Chaumont-sur-Loire’s changing lights. The colours, each in their own patch, shimmer beneath the sun like gemstones.
In the image of paintings by Georges Seurat, Robert Delaunay and Paul Signac, the blues of the clematis and the waters create hundreds of dots of colour, like natural pixels. The eye smoothens out the colours into subtle gradations while demonstrating the importance of each of them and creating a unified whole. Removing or relocating a component of this world, whether animal or plant, would destabilise it and risk it falling apart altogether.
Echoing vertical architecture and plant life, blue is also embedded in the ground. Unlikely paving stones provide a metaphorical mixture of the waters of the Loire and a Sancy mountain spring; little streams make great rivers and…beautiful gardens. 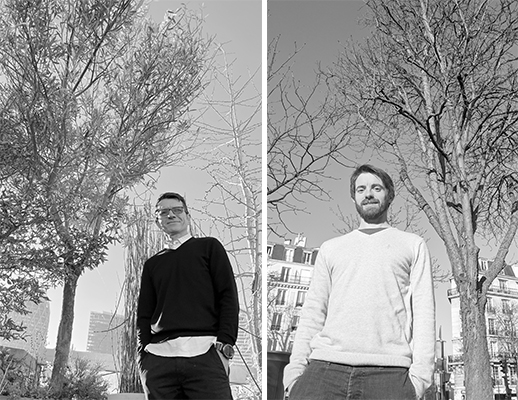 Not a designer, an artist or an architect, something of an inventor perhaps, a dreamer certainly and undoubtedly passionate and curious. In 1993, Nicolas Triboulot founded the QUARKS Design studio, with the aim of trying out all possible materials and all activity sectors, from the luxury industry to catering to object design. He has collaborated with Baccarat Crystal for years, envisioning and creating dozens of objects, playing with crystal, harnessing light by mastering reflection and refraction, taking the material as far as it can go so as to get the best out of it. His extensive collaborative work has led the creation of such items as perfume bottles, watches, and jewellery, as well as a restaurant. Each project is broached in its own unique way, in an attempt to combine poetry with technology… His passion for transparency has not only led him to focus on crystal, on glass, but also on ice. An amazing transparent material, a true treasure, a fresh water reserve that is sadly endangered, and which can be used to cool our favourite drinks, serve as raw material for sculptors or act as a building material for dwellings in the lands of the far north. In this latter respect, he has spent several years collaborating on the creation of the ICEHOTEL in northern Sweden. A fascinating confrontation with ice and its countless possibilities, in which technical sophistication goes hand in hand with poetry in an environment that is certainly hostile but where the sun manages to add yet greater glory to this incredible natural material. A fine illustration of nature’s cycles, with the ice returning each spring to the rivers from which it came. His research on ice has spurred his interest in all aspects of water above and beyond its solid form, including its use, its increasing scarcity, its recyclability, and its possible uses in architecture. This was the starting point for a series of installations highlighting water. The concept being to use waters from various places, colour them and make use of the resulting touches of colour as a painter would on a canvas.

After completing scientific studies in biology and geology, Arnaud Mermet-Gerlat turned to landscape architecture. He obtained a Master’s in Landscape Architecture from the Haute École Charlemagne in Belgium after a year at the University of Montreal, where he developed a taste for working in multidisciplinary teams. Since 2010, he has been participating in development of a landscape division at a major Parisian architecture agency. In parallel, he co-founded Atelier LJN, with which he won the AJAP (Albums des Jeunes Architectes et Paysagistes) in 2016, a prize awarded to young architects and landscapers every other year by the Ministry of Culture and Communication in confirmation of its support for architectural and landscaping innovation, and its determination to promote architecture, and quality of construction and living environment. In keeping with this initial project, his professional practice focuses on experimental projects, involving him fully in their design and implementation. An approach that has led him to apply his talents in France and Europe, including Spain, Portugal, England and Sweden.