Fragility, ephemerality, fragrance and grace – therein lies the great power of flowers. They remind us of the brevity of life. This garden, a play in 3 acts, presents the common essence that humankind shares with them. An ode to fragility in the guise of power.

Act 1: Visitors stand facing a wall composed of packets of seeds, giving promise of wondrous flower-filled gardens, of future generations. The wall, at the foot of which society stands today, also speaks of how seeds “belong” to gardeners, to those who wish to stay connected with the living, perpetuate the mastery of sowing and preserve biodiversity.
Act 2: Bypassing the wall, they come upon the stage itself: a floor they can sit on to contemplate the landscape before them and listen to the messages the flowers send. But who is the actor? Where is the audience? Does it mean that our destinies are tied to the poetic flower?
The garden bears witness to this shared condition. It is structured in accordance with the rules governing Japanese bouquets. Three masses: eucalyptus (sky), rosebush (humanity) and magnolia (earth), two evergreens for eternity and the rose testifying to human talent. A wave of blue makes its way between the three components, crossing the scented white flowers and their abundant foliage.
Act 3: Upon their return, visitors find a place on the wall to continue the exchange and express themselves freely.
Ever attentive to the voices of flowers, the gardener weaves the conditions for a common future... 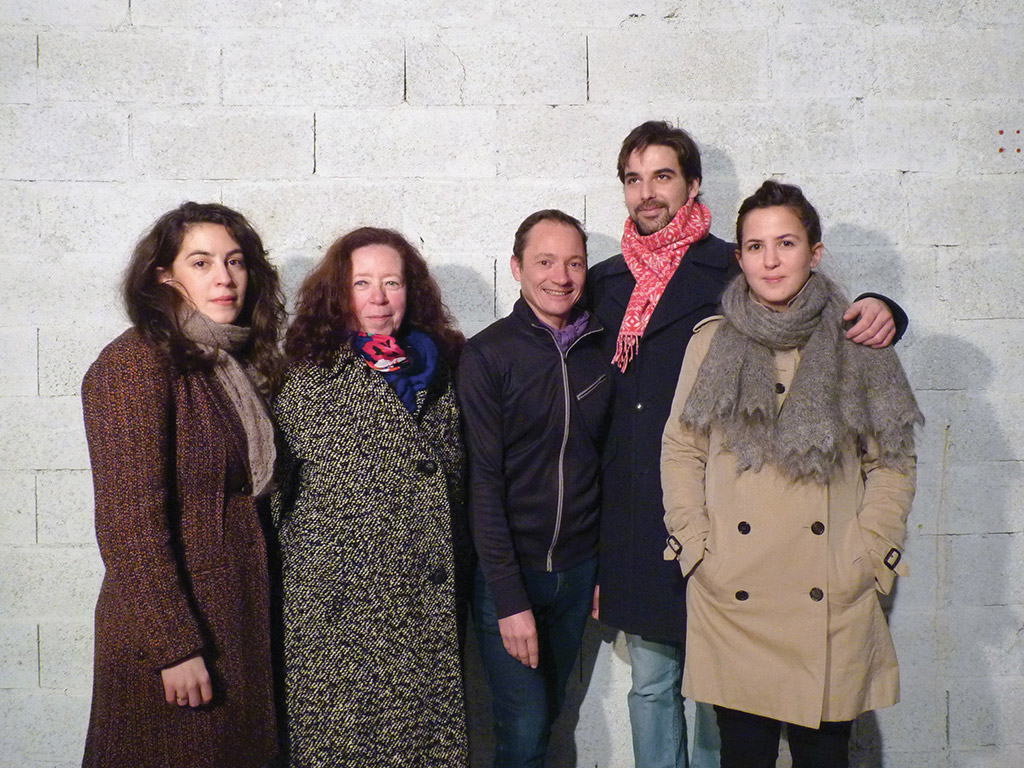 Founded in 2014, Atelier 1:1 brings together a trio of associates with different career backgrounds: architecture, social sciences and artistic production. Henry Flouzat and Clara Lamerre first met when they were students at the Special School of Architecture, where they started collaborating on projects and sharing their interest in/curiosity for objects, architecture and art. Graduating respectively in 2012 and 2011, they both started off working at different architectural agencies as HMNOP architects (i.e. accredited to exercise their professions under their own names) before launching their own studio. During this period, Clara Lamerre also attended a degree course at the EHESS, obtaining a Master’s in Social Sciences, specialising in Territories, Space and Societies in 2015. Léa Lamerre graduated from the EAC in 2008 with the Art Market as her speciality and started off her career assisting with implementation of artistic projects at such cultural institutions as the City of Paris’ Museum of Modern Art, the Museums of Strasbourg and the International Fair of Contemporary Art. She then joined the artist Laurent Grasso’s studio as its manager, and finally Atelier 1:1 as development officer in 2015. “We chose the term “Atelier” (Workshop) because it covers several notions: the craftsperson’s and manual worker’s workplace, group work on a theme, and learning and creation through exchange and collaboration. Dialogue is maintained in a non-hierarchised structure enabling a horizontal mode of operation. The workshop was conceived as a multifaceted structure designed to integrate and unify different individuals and areas of knowhow. It is an area for collaboration between professionals with all the skills required for a project’s overall design. And what about the Bateau Lavoir’s interactive window? Atelier 1:1’s first commission was to design and create an interactive window for the Bateau Lavoir in Montmartre. In July 2016, Atelier 1:1 lent its assistance to a workshop held in Parc Rousseau in Ermenonville, based on Yona Friedman’s "improvised prototype of a cloud”, overseeing its design by physically disabled participants and its creation by schoolchildren. Since 2015, Atelier 1:1 has collaborated with Ferraille Production in creating Point Ephémère’s scenographies for the Formula Bula comic-strip festival. Last spring, Atelier 1:1 created a reed-thatched cabin for the Faverges Cabin Festival in Haute-Savoie. It is currently responsible for the scenography of the upcoming “Game” exhibition at Espace Fondation EDF (Espace Electra) in Paris.”

Dance and landscape form the two complementary sides of Vincent Lahache’s career path, melding with each other, from forest and ring-road dances to the ronde danced by the plants that make up his gardens. It was only after a period during which he devoted himself entirely to contemporary dance as a choreographer and performer that he decided to train as a State-registered (DPLG) landscaper at Versailles National Higher School of Landscape Architecture. While a student there, the top-quality teaching he received was complemented by his discovery of a remarkable part of the estate: the Potager du Roi (the King’s Kitchen Garden). In 2007, he joined forces with Frederic Seguette to found a festival, now in its tenth year, combining contemporary dance, visual arts, heritage and landscaping with the Potager du Roi as venue. Upon completion of his training at the Versailles National Higher School of Landscape Architecture, he joined the staff of Parc de la Villette and was put in charge of its “Jardins Passagers” (Seasonal Gardens), which develop ecology, education and culture. The way plants move was central to his work there and he passed on his love of living things and acceptance of spontaneous dynamics in the composition of gardens and therefore of the world to the gardening staff that came and went. Since 2013, he has been responsible for the landscaped areas of another cultural space, Parc Rousseau in Ermenonville. There again, working in full respect of the founding message of this living heritage shaped by the spirit of the Enlightenment, he develops areas wherein the freedom of nature is celebrated. In parallel to his main work, he also creates gardens for private individuals. The dance of flowers and all living things is at the heart of his approach in all his creations, and the question of the planetary resonance of the gardener’s acts is the guiding concern of all his choices.

Elisabeth Crombecque
"After starting out as a film editor, I became a schoolteacher – a profession I still exercise with the same conviction today. It was while I was on a visit to the Potager du Roi with my pupils that I made up my mind to enrol at the Versailles National Higher School of Landscape Architecture as a student of “Garden Design in the Landscape”. After a very long wait, I was finally granted study leave in 2008. My two years at Versailles, during which I studied everything from drawing to the history of gardens and knowledge of plants to project management, making fresh discoveries and meeting new people along the way, were beyond anything I might have hoped for! However small it might be or might have been, whether real or imaginary, in my childhood and throughout my career, the garden has always played a major role. It is a theatre of the living, of countless hopes, observations, and experiences, where I can give my imagination free rein. A place of transformation and transmission. A place of wellbeing and loving care whose composition is in powerful resonance with the (re)construction of the self. Since graduating in 2011, I’ve combined my teaching and landscaping skills. I now teach part-time and work on garden projects as a freelancer. These may involve creation of private gardens, but above all concern design of special workshops for various audiences (covering all age-groups and all sectors of the public), which I also usually facilitate myself. They combine discovery of the gardens they are associated with (Parc Jean-Jacques Rousseau, La Villette’s Seasonal Gardens, and Académie Fratellini), gardening in practice, and cultural and/or educational activities. Alongside the “Paysage et Patrimoine sans Frontière” (Landscape and Heritage without Borders) association, I’m collaborating on the “Chemins du Bleu en Europe: transversalité des apprentissages et transculturalité des langages 2016-2018” (Roads of the Blue in Europe: transversality of learning and transculturality of languages) European project. 2012 saw the beginning of a highly rewarding adventure that continues to this day: in collaboration with the National Higher School of Landscape Architecture, I carried out a project bearing on creation of a terrace garden for Professor Cohen’s Child-Psychiatry Department at Pitié-Salpêtrière Hospital. The garden, which was completed thanks to support from the Truffaut Foundation, is a truly unique place; designed with the involvement of the children concerned, it has helped improve the process of garden creation in hospital environments and paved the way to a wide range of workshops that are still being held today. This recent professional experience revealed the garden as a place of mediation, where care, attention, expectation, contemplation and wonder contribute to the blossoming of flowers and the human spirit alike. It is highly encouraging in human terms and has orientated me resolutely towards creation of gardens with therapeutic purposes.”