In the 1960s, our imaginations were fired up by the aerial city and transport revolution. Le Jardin Flottant du Songe conjures up these dreams of cities in the sky.

A suspended dream that is now vanishing – driven away by the energy crisis and global warming – leaving in its wake a worn-out, "wrinkled" world that we are going to have to learn afresh how to cultivate. Le Jardin Flottant du Songe superimposes both of these worlds around a pond: the dry earth of the South and the energy-guzzling exuberance of fertile cities. Visitors wander under the flowers of the exuberant world which suck up water from the pond through a solar pump and cast their shadows over a cracked earth. We find ourselves at the centre of this balance. How can we combine technological progress with the preservation of balances?
This is, in fact, a garden of dry grass within a sandy desert, with oases watered thanks to solar energy. These oases rely on hydroponics (closed drip system) and aquaponics (roots plunged in water vapour). In this arrangement, instead of trying to keep the memory of "former territories" alive, soilless cultivation reinvents a new territory. This microcosm where the energy resources are counted begs us to ask how technological progress can be reconciled with preserving balances. As a metaphor of contemporary spatial planning, this garden looks at the relationship between energy and life by setting dry soil against exuberant vegetation.

Jean-Philippe POIRÉE-VILLE, landscaper and artist, and Gérard PONTET, former head of works in the landscape
FRANCE 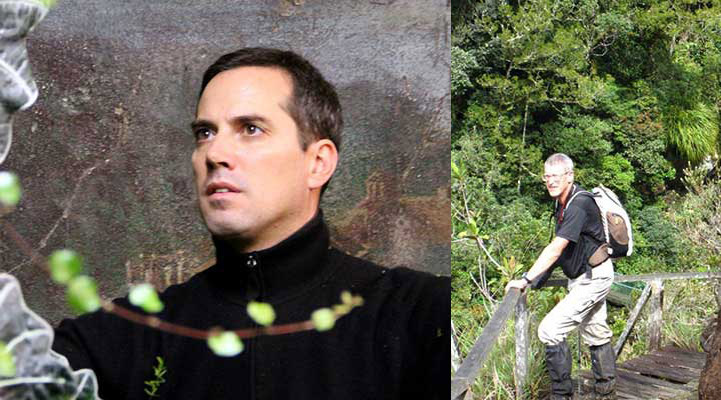 From left to right: Jean-Philippe Poirée-Ville and Gérard Pontet

The landscaper, architect, filmmaker and artist Jean-Philippe Poirée-Ville never tires of exploring the world of plants and of inventing new artistic styles associated with life, plants, their energy and beauty. He teams up with the French National Institute for Agricultural Research (INRA) and renowned architects' firms alike. For twenty years he has chaired associations of workers' gardens which, for him, are a testing ground for the city of the future and the role of ornamentation in the social balance.
Gérard Pontet harks from a family of landscapers, horticulturists and florists who have lived just outside Paris since the turn of last century. With his degree from Le Breuil School of Horticulture under his belt, in 1965 he began professional life in an indoor and outdoor landscaping firm, rising to project manager. Through his curiosity and enjoyment in his work, he has become an expert in soilless technology. He continues his research by embarking on botany-themed trips and passes on his passion by teaching youngsters.