Alone during the storm, one man refuses to flee the disaster that has engulfed his house. Taking refuge in his own attic, he pieces back together a life for himself at the water's edge with the few belongings he was able to salvage.

The storm passes but the water remains, and the man must dream up ever more inventive solutions for surviving in this amphibious environment. He builds himself a raft, as an extension of his new habitat, with all of the materials still to hand and those he finds on the surface of the water. This will be his floating garden, a fully fledged experimentation platform for cultivating food and poetry off the ground. This garden is embodied in a wild nature that has gained the upper hand on civilisation. It is an ode to human inventiveness, to our ability to adapt and create. It tells the story of one man who, despite the violence of his surroundings, looks for practical solutions to continue to survive in this world that has now become uninhabitable.

Visitors are invited to immerse themselves in this imaginary inhabitant's world. They begin in a mysterious room where a large number of sundry items are piled up – clues as to the man's day-to-day activities. It is only by leaving the attic and entering the actual garden that they will grasp the full implications of its nature. 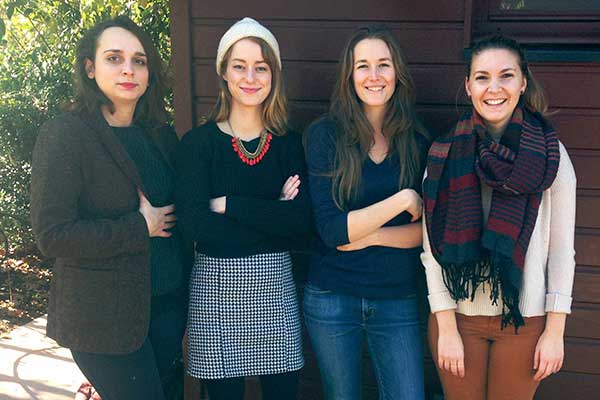 As a DPLG-qualified landscaper, graduating from the Versailles School of Landscape in 2015, Adèle Hopquin splits her time between France and Germany, her country of residence where she works as a freelancer in an environmental planning firm. She previously spent three years studying applied arts in Paris. This experience heightened her interest in draughtsmanship and exploration. During her landscape studies, drawn to the discovery of new horizons, she developed her ideas in Scotland and Germany. In her personal final-year project, she explored the question of the river landscape in the megalopolis of Delhi in India. Travel, encounters, books and politics are all sources of inspiration for her work as a landscaper.
A set designer and visual artist who graduated from Paris School of Decorative Arts in 2015, Julie Mahieu explores such varied disciplines as painting, engraving and photography. Her interest in theatre brings her into contact with lots of directors, choreographers and actors, the likes of Houdia Ponty, Caroline Marcadé, Simon Bourgade and Camille Bernon, with whom she works on several projects for the Paris National Academy for the Dramatic Arts and for shows staged in Paris. The challenges of 20th century architecture and contemporary literature are of particular interest to her, and she finds inspiration in her reading material and outings in the city. She likes to pass on her way of seeing the city and human beings through installations that reflect our natural surroundings and the impact we have on things.
An applied arts graduate, Lélia Demoisy became a set designer upon completing her studies at the National School of Decorative Arts. Her final year projects were an installation and short film inspired by Antoine Volodine’s work, which she designed and produced. She works in film and theatre alike, but also extends her skills to installations, which she fashions alone as an artist or in partnership with Julie Mahieu. Born in France to parents who had spent their childhoods in Africa, she soon gained a taste for travel and spent one month in Lebanon, one month in Madagascar and six months in Quebec where she wrote an essay on the individual's relationship with nature in isolation and the showcasing of this natural experience through theatre and film. With the 5,000 m² family garden to tend, working at Domaine de Chaumont-sur-Loire is yet another step in her efforts to build bridges between her profession as a set designer and landscaping.
Maud Négron is a DPLG-qualified landscaper and decorator. After literature A levels, she enrolled in the Olivier de Serres School and graduated with a degree in Space and Volume Communication Design. These initial studies gave her the opportunity of exploring the different dimensions of space in a project - whether physical, artistic or technical. In 2011, she enrolled in the same class as Adèle Hopquin at Versailles National School of Landscape (ENSP) and combined her studies there with a job in a firm for three years, enriching her academic research with her on-the-job experiences. Since completing her course at the ENSP, she has put what she has learned to practical use by collaborating as a decorator in various cinema projects, in search of new encounters and experiences.