Ticketing
"The fact that the colour green is produced by mixing yellow and blue does not mean that green is a yellowish or blueish colour.” Ludwig Wittgenstein
To echo the theme of the International Garden Festival, the Domaines annual event this year focuses on colour. Daniel Walravens will display a strict variation of 50 paintings which explore all potential colours of green, the colour of plants. To continue the work started in 1986, it will take place in an area marked by its history and former purposes.
"The Fenil Gallery is an area marked by its history and former purposes1 . This first type of intervention, in this place, should not be the occupation of a container but an occupation which revives the place 2​
De vert en vert is structured around three proposals that interact with one another according to various strata: 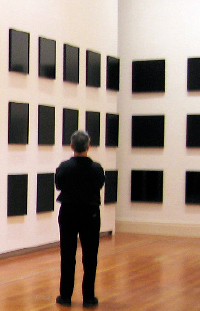 Daniel Walravens was born in 1944 in Créteil, and lives and works near Paris. He became a colour designer and produced numerous colour charts and cards for industry.

1 Previously the cowshed – in almost its original state – included in the model farm constructed at the start of the 20th century by the princely de Broglie couple, the owners of the Domaine de Chaumont-sur-Loire.
2 “It is not the bridge which takes the place to stand on it from the beginning; rather, the place comes into being only by virtue of the bridge.” Martin Heidegger, Bâtir habiter penser, Essays and conferences, Paris, Gallimard, 1958, p.183.
3 The colours of which have come from the colour chart “Totem Tollens Color System”, Bright colours (456 shades), Daniel Walravens colour creation, Tollens, Saint-Ouen l’Aumône, 1981.
“Defining colour consists of carrying out the work of a grammarian, poet, philosopher and even historian, novelist and politician in a single stroke”. Denys Zacharopoulos, in Daniel Walravens, L’un vers l’autre, Du vert en general, Domaine, 1994, Bignan, Domaine de Kerguéhennec, 1995, p.227.
4 You look to see what you would not see if you did not look, Ludwig Wittgenstein, Remarques sur les couleurs, Mauvezin, T.E.R., 1983, p.69.
5 Comes from Grandes Surfaces (1989) and other self-adhesive labels relating thereto (3.7 x 11 cm, 3 x 6.5 cm, 2 x 4 cm). They introduce an uncertain path, a change in scale in the face of De vert en vert (extrait). See Daniel Walravens, De la couleur, Parcours, 3 lieux, De la production à la collection, De la peinture en général et de la couleur en particulier, Brussels, La Lettre volée, 2006, p.134.
6 Hard copy, medium green (144 x 592 cm).