German plastic artist Evi Keller’s work questions the cosmic principle of matter transformed through light. The imprint of a moment (captured in sculpture, painting, photograph, video, soundscapes, and performance) reveals a process of substantiation which incarnates and progressively transforms itself through installations that the artist refers to as “transition areas”.

Her progression through these areas led the artist to create her Anthropocene era-inspired works, Matière-Lumière. Made from star-born carbon, an essential element of all living matter and continually recycled by man, these works are energised and transformed through absorption, transmission, and reflection to become matter that changes throughout its interaction with the spectator. Through this alchemical process, Keller transforms the memory of hundreds of millions of years into works of art.

This unique piece, dominated by grey and silver tones, is cunningly illuminated with subtle, moving plays of light, specially designed by Keller for the Domain’s Bee Barn.

The viewer finds himself confronted with the result of this quasi-alchemical transmutation, a fascinating transformation of matter from the depths of the earth into a mysterious and delicate matrix.

“Light is such a subtle matter that we can neither weigh it nor touch it, but it is that which gives us access to the spiritual world. We must therefore seek out the light and remember to make it a part of ourselves every day, like some pure and shining elixir.
The Enlightened Ones, for whom light is the only reality, never cease to work with it and concentrate on it in order to stay in communication with the divine. Their practices and teachings can be summarised as follows: the only truly effective way to enter into a relationship with the Heavens is that which we can create ourselves by weaving together the strands of light between that world and ours. Once these threads are woven, the Heaven and earth within us are in contact with each other and interchange in a way that brings us fulfilment.”

“Just like Demeter’s daughter, the goddess Persephone; crossing through the shadows to be born in the light of spring, Evi Keller reconnects with the buried memory of matter to bring her work into the light. She has given the unique title, Matière-Lumière, to a creation which unfolds in different media: sculpture, painting, photography, video, sound, and performance. Like an alchemist, the artist transforms and sublimates this vibrant matter and engraves it with spirituality; an immediate, incarnate relationship is formed with her work, which surrounds us like living skin. From the moment of its creation, the very point of revelatory apparitions, an “other” dimension opens up, linking us to the “living cosmos”, to borrow a phrase from anthropologist Edgar Morin. The artist’s touch subtly brings the body and the spirit into play to resonate with a world in perpetual motion.” Fanny Revault, Art Interview, 2021

“Evi Keller’s creation, a veritable world-work whose components reveal themselves little by little, confronts us with the very origin of creation in the most radical sense of the word; when everything was nothing but fusion, discharge, concretions of matter, and flashes of light. More than just a simple installation, the work is like “lightning streaking through the shadows in the night of Time”, in the words of Schelling. Evi Keller’s art magically reconnects with the forces of nature, the romanticisation of the world dear to Novalis and Beuys, the union of the known and the unknown, the visible and the invisible. Like them, she tries to get as close as possible to “the essence”, the inner substance (…).
Her work arrives at the crossroads between the matter of which we are all made and the light which ancient civilisations saw as the supreme principle of understanding, the very sun of life. Going farther back, since changes in scale are also voyages through time, we can see prehistoric man using torches and bursts of fire to bring to life, that is, give a soul to, the walls of caves and the surrounding subterranean life. (…)” Olivier Schefer, from the exhibition Stèles by Evi Keller, Galerie Jeanne Bucher Jaeger, 2021

“Matière-Lumière also carries within itself a contemporary issue… As witnesses of the Age of Man, products of processing petroleum created deep within the earth, the plastic sheets incarnate the memory of hundreds of millions of years. When I transform this material into a work of art, it is regenerated by its return to the source, becoming organic and alive once again. Creating a Matière-Lumière is an act of repair. It raises the question of man’s rebirth, as well as the question of his reappropriation of his own humanity.” Taken from an interview with Evi Keller in 2021. 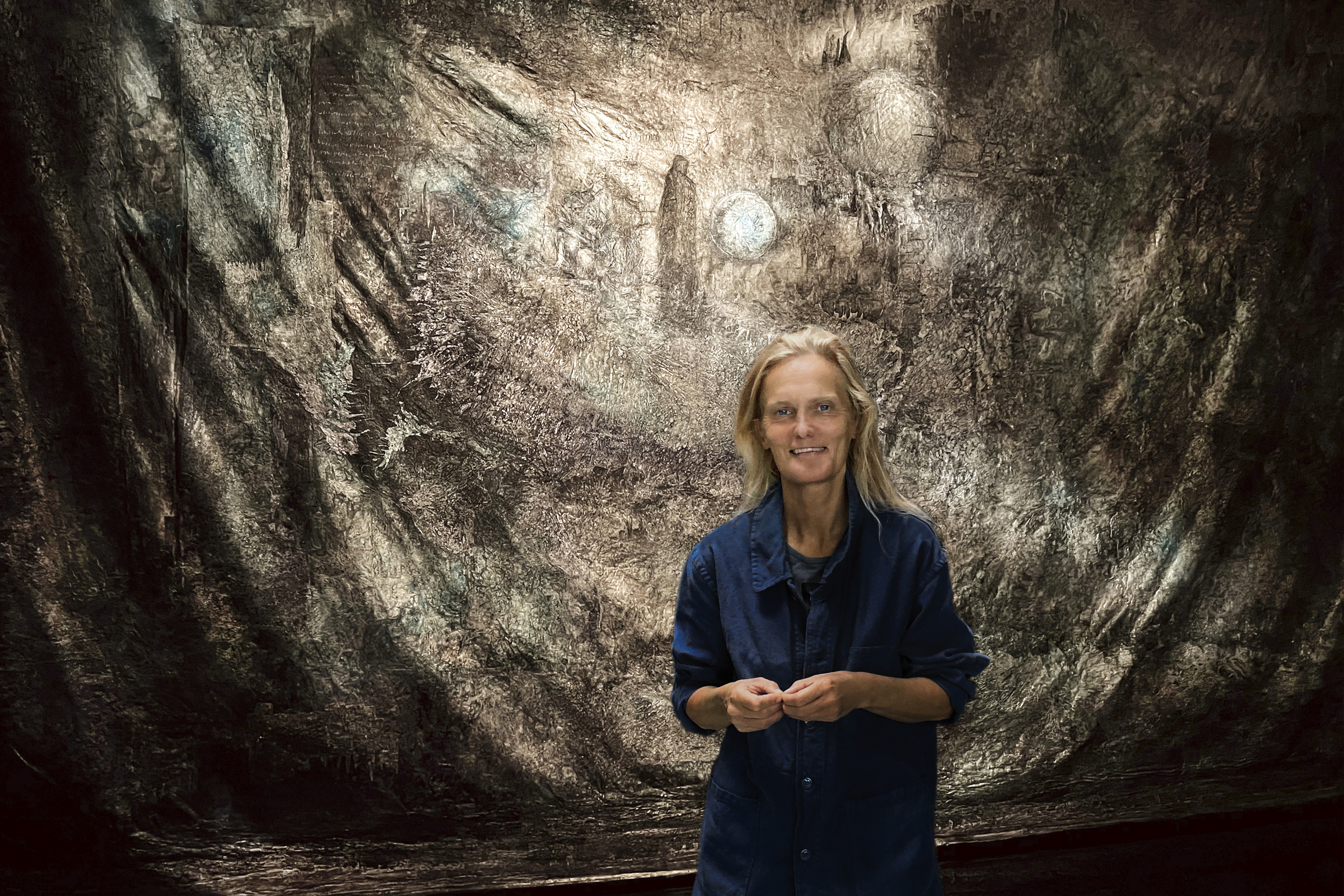 Evi Keller was born in Bad Kissingen, Germany, in 1968, and studied art history, photography, and graphic art in Munich during the 1990s before settling in Paris where she worked as a photographer. In 2000 she opened her own studio and in 2001 she debuted a cycle of installations entitled The World In Between.

The following year, an installation of Matière-Lumière was exhibited at Brussels CENTRALE for contemporary art. During an exhibition of her works at the Musée des Arts Décoratifs, a conference was held entitled “La matière au-delà du visible autour de Jean Dubuffet et Evi Keller [Matter beyond the visible in the works of Jean Dubuffet and Evi Keller]”.

Throughout the recent years, Keller has also fostered frequent collaborations with contemporary musicians and dancers. In 2018, she decided to dedicate herself exclusively to the creation of a monumental installation entitled Performance/Matière/Lumière (exhibited in the Église Saint-Eustache during the 2019 edition of the Nuit Blanche). Like an initiation ritual, the artist welcomes spectators into the intimate and personal experience of multiple visions of matter’s transformation through light.

Evi Keller is represented by the Galerie Jeanne Bucher Jaeger in Paris.