le bois des chambres
Ticketing
Min Jung-Yeon’s installation portrays the notion of reconciliation.
Here, she has brought together different elements and materials, while preserving the integrity of each one, to ultimately create a new harmony, in time and in space.

The artwork takes inspiration from the artist’s own experience, and the tragic reality of Korea that has been torn in two for sixty-six years now.

She focuses on a dual theoretical base. Min Jung-Yeon invokes the thoughts of Lao-Tseu about opposites - considered to be essential and sources of innovation - and focuses her creation on this ancient approach, whereby a void is not simply a void, but a creator of energy. She has also been inspired by contemporary research and the ideas of time and space put forward by quantum physicist Carlo Rovelli: if we have always thought of it as an empty space, today we speak of ‘black’ or ‘transparent’ matter, which remains to be explored. As for time, we now know it is a relational notion, made up of multiple layers, and not just individual and one-directional as our human perception would have us believe...

From these real, philosophical and scientific elements, Min Jung-Yeon has designed a monumental and immersive artwork. The visitor is both free to explore at his own will, and subconsciously caught up in a huge kaleidoscope with subtle superimposed interweaving. The reflection in the mirror is the only reality of time without sequence... The layered visions alternate continuously. It is an endless organic power. 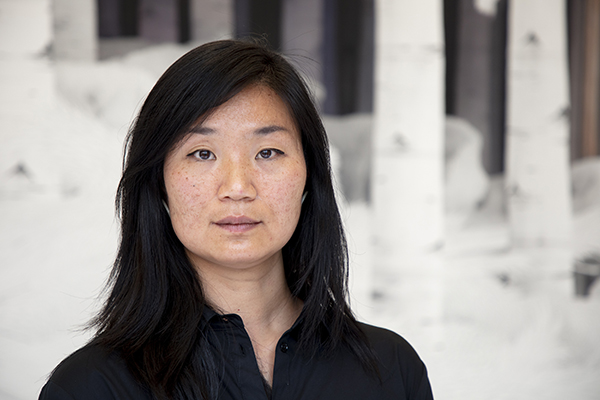 Min Jung-Yeon was born in 1979 in Gwangju, in South Korea.

She grew up in the countryside of South Korea, where, from a very young age, she had a profound interest in nature, a place of endless observation. In 1997, she went to Seoul to study art at Hongik University. After her studies, she felt the need to tackle other ways of thinking, and so Min Jung-Yeon left Korea to join the Beaux-Arts de Paris (ENSBA) and she graduated in 2006. She has lived in France since then. Her work is inspired by her encounters, and she remains very attached to her origins, a Korea torn between consumerism and tradition.

Nothing is static in the extremely delicate world of Min Jung-Yeon. Nothing is completely real and nothing is completely imaginary either. Her works resemble scenic, frontal compositions and have viewers holding their breath. The works are the expression of the artist’s intimate being and her belonging to a contemporary history, as well as her profound interest in sciences, specifically the exploration of space.

Min Jung-Yeon took part in Medi(t)ation, the third Asian Contemporary Art Biennale at the National Taiwan Museum of Fine Arts in 2011. She was the 2011 winner of the Prize of the Partners of the Saint-Etienne Métropole Museum of Modern Art. The museum devoted an exhibition and a catalogue to her drawings - Demander le chemin à mes chaussures - in 2012. A number of her drawings are included in the museum’s collection. Her work was presented in the exhibition Seoul-Paris-Seoul at the Musée Cernuschi in Paris in 2015. In 2017, The State Museum of Oriental Art in Moscow held the exhibition The Memory of Space. In 2019, the Guimet National Museum of Asian Arts (Paris) gave her ‘carte blanche’.