In the manner of a Magritte painting, this garden plays on the discrepancy between an object and its representation, between objectivity and subjectivity.

The garden of thought… How do you set about representing your thoughts in space?

In the manner of a Magritte painting, Ceci n'est pas un jardin (This Is Not a Garden) plays on the discrepancy between an object and its representation, between objectivity and subjectivity.

The garden provides visitors with an initial picture of formal elegance: an endless and near featureless garden that troubles the senses. They are intrigued by the path they find themselves on, and by a truncated perspective that disrupts the picture and impels them to think. Called onwards, they makes their way to the other side of a strange wall, a reflecting membrane composed of mirrors, and find themselves in the midst of a real garden, alive with all the soothing beneficence that nature can provide, which binds wounds and encourages thought.

They interact with this second garden, seeing, touching, feeling, listening, and are free to roam its confines as they will: they think. 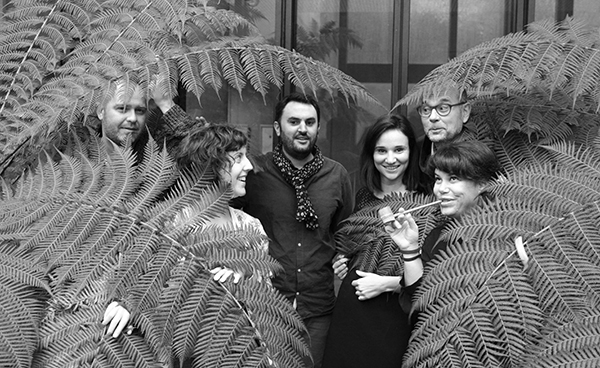 “Nom d’une Pipe” (which might roughly be rendered in English by “For Goodness’ Sake!”) is a collective of colleagues from SCE’s Ateliers Up+, including landscapers, architects and urban planners. Regarding Nantes as their adopted city, and more than just colleagues, the Nom d’une Pipe team came together around a shared desire to tackle projects hands-on and are not afraid of getting mud on their boots: its members have set off on an adventure, swapping mouse and pencil for shovel and pipe!

A newcomer to the group, Arnaud Anger is a landscaper who graduated from Geneva’s Higher School of Landscape, Engineering and Architecture. He worked at the Ter Agency for 6 years, participating in numerous major projects in France and elsewhere, and then went on to collaborate with various landscapers, architects and urban planners, finally joining Ateliers UP+ in 2017. Marked by his three years in Switzerland, he has kept a pragmatic turn of mind and looks for efficacy of design in his projects. What he likes most about his profession is its diversity and the fact that it gives him the opportunity to travel widely.

Clémence Aumond is a young architect and urban planner who graduated from Nantes’ School of Architecture and also holds a Master’s in Towns and Territories from Nantes’ University. Her dual training path has enabled her to acquire a crosscutting vision combining architectural and urban approaches. Her vision of a project’s landscaping aspects also incorporates a keen sensibility to the context of the preliminary study, to the “already there”. Between times, she loves cooking, treating the rest of the team to her famous cookies, which get everyone’s creative juices flowing. Known by one and all as “the bulldozer”, she likes taking up fresh challenges and getting her teeth into new projects.

A hands-on man most at home with the practical side of things, Ghislain Dalbos is the team’s project manager, making sure that everything holds together and reassuring his co-workers… His motto? “Long live the project, boots on and good humour all round”. He roams his sites up hill and down dale, focusing all his energies on constructing whatever project is in hand, juggling plans, cross-sections, profiles and quality control needs with the paramount skill. The acknowledged experience he has gained in the course of the many projects he has overseen in all manner of circumstances reassures design teams, whatever crazy ideas they may come up with, along with contractors concerned about their budgets and operations.

A dynamic engineer who is never content to rest on her laurels, Julie Ferrero tackles the subjects of landscape and urban planning in their entirety, imbuing the whole mix with an inspirational dose of energy. Trained at Agrocampus Ouest in Angers, she is especially aware of the interaction that plant life can bring to projects. Her thoughts and creative work have given rise to richly varied multi-purpose projects that all protagonists are called upon to make their own and add their input to. With her legendary good humour, Julie is the team’s ray of sunshine, knowing just how to attract attention and ensure the happiness of one and all.

Juliette Ols is a young landscaper who graduated from the National Higher School of Architecture and Landscape in Lille after completing a bachelor’s degree in architecture in Nantes. This dual approach has led her to acquire a vision sensitive to the attributes of space and an overall approach to project teamwork, which she likes to lead. Enthusiastic, ever willing and blessed with true sparkle, she thinks of space as an entity unto itself that nourishes projects and incorporates human aspects to the full. Artist in situ and on graphic tablet alike, her projects are entireties in which every detail is meticulously planned out.

After graduating as a landscaper from Paris’ Higher School of Garden Architecture in 1982, Frédéric Fouan worked at several agencies in order to round out his training and gain experience in the many different aspects of projects and the work they entailed; he then joined forces with a true master of creativity, Bernard Lassus, with whom he spent 5 years collaborating on the agency’s various projects. He went on to continue his career in Nantes, on the banks of the Loire, where he joined the SCE’s Ateliers UP+. Over the past 20 years and more, he has led and overseen a wide variety of projects in the Grand-Ouest region. Given his wealth of experience, it is hardly surprising that his colleagues look upon him as the team’s “sage”, weighing up the technical and aesthetic aspects of projects with a practised eye. Very much involved in his profession, he has been a member of the French Landscape Federation since 1986, spending 4 years as Grand-Ouest regional delegate.