le bois des chambres
Ticketing
“I was asked what is my ideal garden.  A place where I can sit with a close friend and talk. Where there is water that is in our view and around us.  There is a view of the wider landscape laid out before us – we see textures and colors and we hear sounds including that of water.  As we take in this space before us, we talk about the wider world and try to understand what is happening. As we seek understanding, we raise questions and explore answers. We both evolve in that moment and take home memories of that conversation and the environment in which it happened.
Our perceptions change according to our intellectual or physical placements.  This garden seeks to explore both.
This garden is composed of water and a sculpted seating place for two people. Water surrounds you and falls into a channel that connects to a basin of water reflecting both the view and the sky above.
When you enter the garden, you see ovals that are elongated.  When seated in the sculpted bench, you perceive the ovals as perfect circles.  The oval channel of water embraces and fills the internal basin of water.
The materials of the garden are inspired by the surrounding environment. The Loire River reflects the sky, the pale limestone and deep gray slate roof of the Chateau. The white roses help frame the view extending the horizon.” Kathryn Gustafson 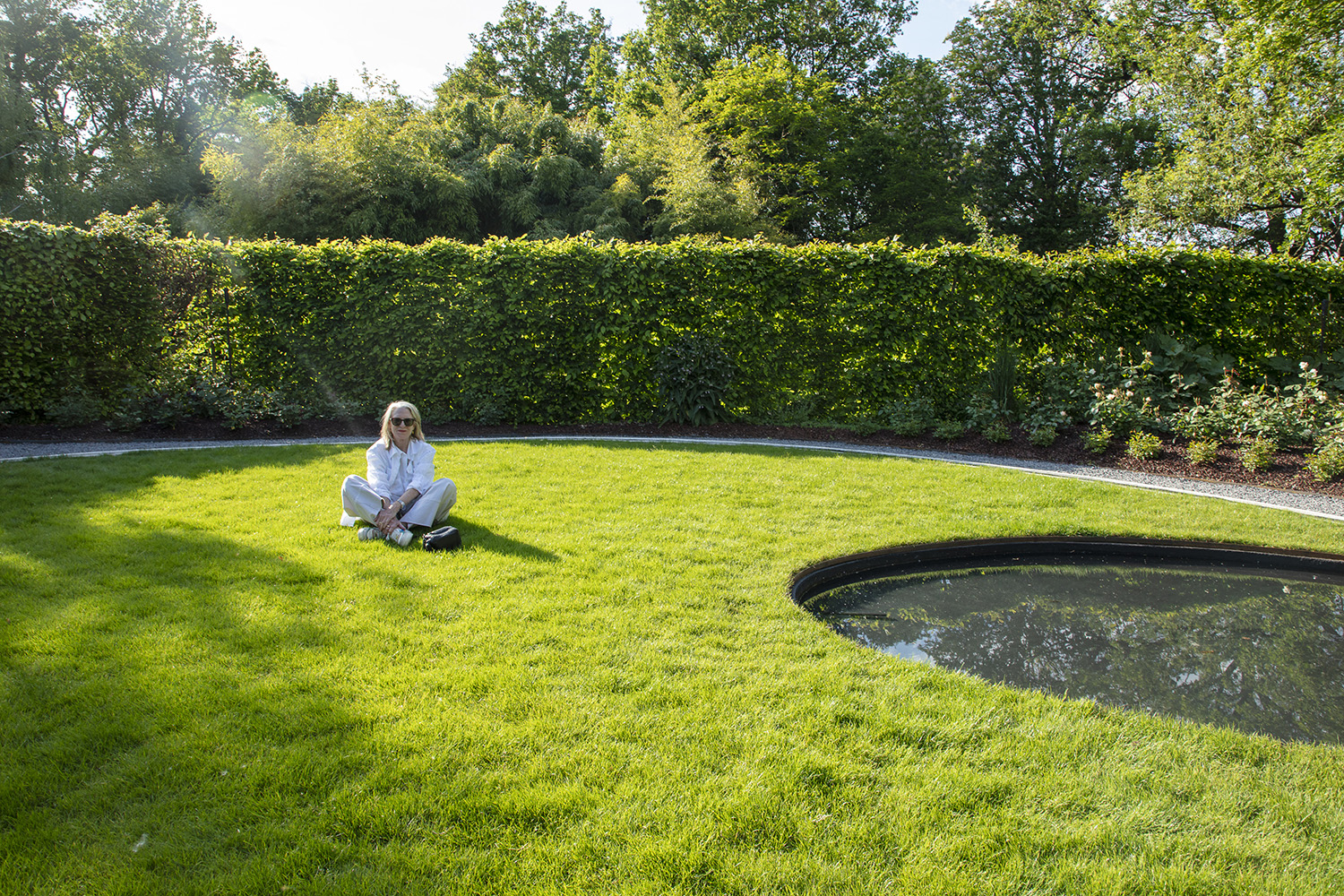 Kathryn Gustafson was born and raised in Yakima, Washington. Her parents were surgeons. At the age of eighteen, she enrolled at the University of Washington in Seattle to study applied arts. She moved to New York a year later to study at the Fashion Institute of Technology. After obtaining her degree, she left the United States and settled in Paris with the aim of becoming a fashion designer. She was captivated by French sensibilities and decided to enrol at the Versailles National Higher School of Landscape. She graduated in 1979 and started on her career as a landscape designer. Kathryn Gustafson works across the world through her two agencies, Gustafson Porter + Bowman in London and Gustafson Guthrie Nichol in Seattle.

Kathryn Gustafson’s work is characterised by its flowing lines and simple forms. She sees designing a landscape as the act of intertwining the physical environment, culture and climate, along with the history of the site involved, in order to connect the body to the soul and the mind to the earth. Her work mirrors the shaping of the land that provides forms with their flexibility and purity, combining plant life with landscape creation. She examines every piece of land in order to bring its story to light. Her first questions bear on the site’s water, population, history and myths. One of the things that makes Gustafson’ work really stand out is the way in which she sculpts and rearranges the land. A determination to create harmony, serenity and balance between people and nature. Timeless spaces, embodiments of calm and peace. She is clearly much influenced by her first vocation, textiles, as can be seen by the use she makes of these forms and the flexibility and lightness that she gives them.

Kathryn Gustafson has over 35 years’ experience in the field of landscaping. She has created and completed more than 30 projects, either alone or in association with others. Her achievements in France include such parks as Les Jardins de l’Imaginaire in Terrasson-Lavilledieu (Périgord), integration of buildings into the landscape, including the Shell, Esso and L’Oréal head offices near Paris, and urban squares: Place des Droits de l’Homme in Evry.

She created the fountain commemorating Diana Princess of Wales in London’s Hyde Park.

Its past and recent work – parks, public spaces and infrastructures – has provided Gustafson Porter + Bowman with in-depth knowledge in such areas as water retention ponds, riverbanks, paved gardens and fountains, soil decontamination, bridge and tunnel construction, hydraulic and electrical facilities, and lighting systems.

She was selected to develop the area around the Eiffel Tower from the Trocadéro to the Champs de Mars.

> Hon. Fellow of the Royal Institute of British Architects

> International Architecture Award from the Chicago Athenaeum (for Towards Paradise installation at the Venice Biennale, 2009)