Many are the painters who have set up their studios in the midst of their gardens, for flowers are a source of inspiration for artists, who give their beauty fresh expression.

“Inspiration…” is therefore a garden that combines art with flowers.
Visitors enter it via the studio, where everything tells of exuberant creativity: canvas and brushes still lie on a paint-spattered table. They make their way through a flower-decked arbour and come upon the garden itself: the interaction between artist, studio and garden is clear for all to see. An easel bearing a virgin canvas is waiting on the terrace. The painter has gone out for a few moments and the place is free.
Set in various positions along the terrace, seven empty frames play with the garden’s perspective and lead visitors to appropriate fragments of landscape for themselves. And it is by looking through each frame that they come to understand what the beflowered plant life is offering them: masterpieces!
Vincent has left his vase of sunflowers lying around. Claude is at the edge of the pond waiting for the waterlilies to flower. And “Douanier” Rousseau is dreaming of tigers prowling his flowery jungle…
Seven famous paintings are called to mind by means of planted-out areas visible through the empty frames.
The garden is evocative of works where the artistic interpretation of the flower-filled landscape is left to visitors: the mist spreading across the pond reflects the impressionists’ quest to capture the invisible. The jungle with its outsize flowers evokes the infancy of art and naïve painting. The tip of the hat to modern art gives a kick in the pants to academic art… With these flowers, everything is art! 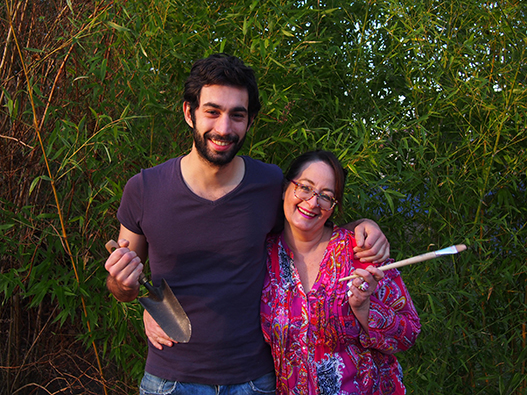 Visual artist Anne Marlangeon grew up in Montmorency in the Paris region. After studying law, she embarked on a legal career as general counsel for an agrifood group.
She had attended visual arts workshops from an early age and art had always played a key role in her life, so when the opportunity presented itself in 2005, she had no hesitation in leaving the business world behind in order to open her own artist’s workshop, “L’Atelier d’Anne”, which has become a centre for creation and transmission of her passions, which include drawing, watercolours, painting, and framing artworks. In addition, she is currently enrolled in the Panthéon-Sorbonne University’s art programme. As a child, she spent her holidays with her grandmother, in Anjou near Ingrandes-sur-Loire, leading her to form a close bond with the Loire landscapes. Her sensitivity to gardens and flowers, their poetry and colour, has always nourished her work. And it was from this unusual cocktail of interests that the idea for “Inspiration” was born.

A 25-year-old landscape engineer from Lyon, Michel Lopez is a graduate of INHP-AgroCampus-Ouest in Angers. His landscaping experience has been much enriched by the missions he has carried out on behalf of various bodies, from setup of theme-based visits at the Parc de la Tête d’Or’s botanical garden in Lyon to management of the tree policy and responsibility for green spaces in a northern municipality and another in the Paris region. He is currently at work on developing a Dutch nursery’s French clientele. His training led him to make the Loire Valley his main study field, with special appreciation for its dynamic sandbanks, pollarded ash trees and wines. A true devotee of trees and flowers, Michel Lopez has a genuine artistic sensibility that he cultivates in museums and drawing workshops alike. And it is on this terroir, with its own special alchemy, that “Inspiration” took root.