98% of the Jardin de la fontaine anémone blends perfectly into the natural environment, showing no signs of existence outside of it. This fragility of a life hanging on only 2% invites meditation. The tentacles of plants are woven together much like a Persian rug, and intertwine and draw the visitor in, towards the water of the fountain. The layout of this garden resembles monastery gardens.

When visitors enter this section, they will feel as though they are in a sort of vivarium, not because they feel entrapped, but because they are confronted with a fragile reality which encourages reflection about the way we lead our lives, and how our lives could change in ten minutes if we make the wrong move. This scenario encourages harmonious balance. The walk through the garden is in harmony with its spirit, whereby everything plays on the tips of the tentacles. 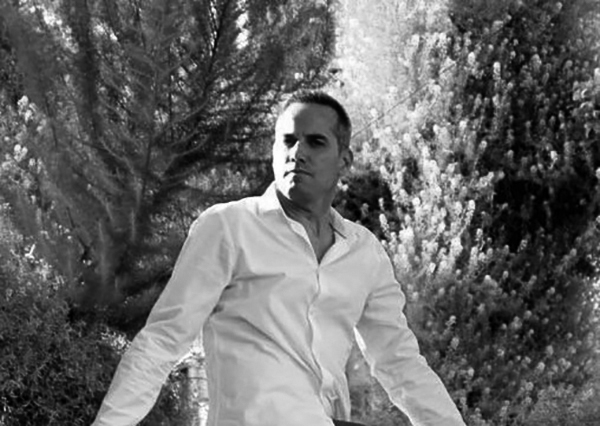 Jean Philippe Poirée-Ville is an architect and landscaper. The grandson of farmers, he has been inspired by the changing of the seasons, work in the fields, and nature since his early childhood.

He decided to study architecture and graduated from the Ecole Spéciale d’Architecture in 1996. At the same time, he studied at the National School of Landscape Architecture in Versailles where he was able to fulfil his passion for nature. He applied for two patents for a new aerial hydroponic crop system. This dual training and the instruction of Paul Virilio led him to think about plant ornamentation and digital technology.

He started his career as an architect, putting on various exhibitions on the subject of light and plants. He united a group of artists around the concept of “Hyperlight” in exhibitions at the Fondation EDF in 2001, at the Espace Braquage and at the Ecole Spéciale d’Architecture. He took part in the Les Passeurs de Lumière exhibition with Hubert Reeves and Michel Cassé in Chartres. In 2004, he did the lighting for the facade of Saint-Jean cathedral in Lyon for the city’s annual festival of lights.

For the Chaumont-sur-Loire International Garden Festival, he designed the Entreciel garden in 2003, Sylphe in 2012, Jardin flottant du songe in 2014 and Fleurs d’outre-tombe in 2016.

In 2005, for the Nuits Blanches festival, he created a hanging garden in the courtyard of the Opéra Royal at the Château de Versailles.

He continued his research work with INRA and worked on projects for France Galop, La Villette, the Élysée, the City of Strasbourg, the Fondation EDF, the Potager du Roi, the Chaumont-sur-Loire Centre of Arts and Nature, the Foreign Affairs Ministry building, Disneyland park and the City of Annecy. He has also been involved in projects abroad: Montreal, Shanghai, Moscow, etc.

He has worked with some renowned architects such as Claude Parent, Jean Nouvel, Wilmotte, François Roche and landscapers such as the TER agency and botanist Patrick Blanc.

For Jean-Philippe Poirée-Ville, plant-life represents the very first architecture, it transcends time and space and can nurture the city of tomorrow by combining poetry and nature.