"I want it, I want it…” exclaimed Marie-Charlotte-Constance Say (1857-1943), granddaughter of sugar magnate Louis Say, when, while strolling along the banks of the Loire with her sister Jeanne Say (1848-1916), Marquise of Brissac, she first set eyes on Château de Chaumont-sur-Loire. On 17 March 1875, when she was just 17 years old, Mademoiselle Say became the owner of Château de Chaumont-sur-Loire and the adjoining lands – 1,025 hectares in all.

As her parents were deceased, she brought her husband twelve million gold francs as well as Château de Chaumont and a townhouse at 10, Rue de Solférino, Paris. Apart from the Rothschilds, there was no wealthier heiress in France.
Shortly after their wedding, Princess de Broglie made Château de Chaumont her principle home, and for the next half century the luxurious residence was the scene of countless sumptuous banquets and receptions.

Gabriel-Louis Pringué (1885-1965), a dandy and close friend of the de Broglies, spent a great deal of time at Chaumont over the years – the three months of late autumn and one month in the summer. These many trips in the most illustrious aristocratic residences of France and Europe prompted him to write an account entitled "30 years of dinners in town"1 , which particularly describes day-to-day life at Château de Chaumont back in the de Broglies' day. Although his grasp of historical reality is to be taken with a pinch of salt, his recollections of the de Broglies' lifestyle are altogether invaluable.

"As she (Marie-Charlotte-Constance Say) was pulling up in the hooded carriage belonging to her sister, Marchioness de Brissac, complete with footmen in wigs, outside La Madeleine Church – which was so filled with guests and onlookers that the square and steps were swarming with people – she said to her sister: Jeanne, there's too many people, let's come back tomorrow." 1

"She handled the millions the way we play with a ball, railing against the steep price of things without ever hesitating to buy herself whatever her heart desired. When she wanted a friend's company, she never conceded that her invitation, by telegram or telephone call, might be declined. In such a case she would be plunged into childlike despair, claiming to have been abandoned by everyone. […] She would decide to have her yacht prepared for a faraway cruise in the same way as she called for her car for a trip to her tailor." 1

When planning a ball or a dinner, she picked out from her many lists all of the figures among which she intended to make her choice: Close friends and Society people, Royal Highnesses and Princes, Ambassadors and Foreigners, the Dancing set, the Theatre set, the Bridge set and lastly People of little importance but who had their uses for all that (sparkling unmarried women, spinsters, with little wealth but who were well-mannered and able to provide entertainment).
She spent at least half of every year there, and always had a dozen or more houseguests for weeks at a time, apart from weekend guests and what she called “flying visitors”, usually belonging to the “Staff of Royal Highnesses and Princes”. The palatial abode played host to most of the crowned heads of Europe and the East (including Edward VII of England, Don Carlos of Portugal, Charles I of Romania, and the Maharajahs of Kapurthala, Baroda and Patiala), along with the greatest scholars and most famous artists of the day (Charles le Bargy, Francis Planté, Francis Poulenc and Marguerite Deval among them).

"I saw the most illustrious guests in all of Europe and the civilised world come by here, heard the subtle music of words, accompanying the deafening dance of language on the melodious bow of phrases. Princess de Broglie was immensely well read, an accomplished artist, who surrounded herself with captivating minds."1

Princess de Broglie was a woman of limitless imagination and would indulge her every whim. Alongside her many qualities, however, she had one major fault – loathing rules and discipline of any kind, her capricious disregard for time was more than enough to drive her chefs and butlers to distraction. As her chef could never guess what time she might decide to be hungry, he had to prepare a series of similar dinners every day in order to have one always ready to serve (with menus of some 11 courses and desserts!).

Although the Crosnier sugar market crash in 1905 brought the Say Sugar Refining Company to bankruptcy, Prince de Broglie’s wise administration kept his wife’s personal fortune intact. A family council was nonetheless summoned in the presence of their elder and younger sons Prince Albert de Broglie (1876-1922) and Jacques de Broglie (1878-1974), and their daughter Princess Marguerite de Broglie (1883-1973). Following lengthy discussion on the household’s extravagance, Princess Amédée de Broglie concluded that “As we must tighten our belts, I have decided to do without foie-gras rolls at teatime”.
With or without foie gras, life at Chaumont went on as always. Losses following the Crosnier crash were substantial, amounting to some 28 million gold francs. Nonetheless, Princess still had enough millions to continue living in the style to which she was accustomed and go on surrounding herself with the loyal or self-serving friends on whom she bestowed her generous hospitality.
Prince de Broglie died in November 1917, several years after the Crosnier crash. A skilled manager, he had kept himself busy from 1875 onwards enlarging the Chaumont-sur-Loire estate. Princess de Broglie, who had no idea of management, gradually let matters slide. The stock market crash of 1929 resulted in currency being devalued and consequent losses of millions of francs for the Princess.
Finally, in London on 19 September 1930, she committed herself to a second marriage, this time with HRH Infante Louis Ferdinand of Orleans and Bourbon (1888-1945). She was 72 years old at the time and he only 43.

Despite her considerable fortune, a series of financial setbacks obliged the Princess of Orleans and Bourbon to sell her townhouse at 10 Rue de Solférino in Paris, and divide up the Chaumont estate, auctioning off many works of art in the process.

On 12 October 1937, the Princess of Orleans and Bourbon was served with a compulsory purchase order, the State having initiating expropriation proceedings through Blois District Court as being in the public interest. The Princess received compensation to the tune of 1,800,000 gold francs, paid out by a special fund set up by the Historical Monuments Department. The official handing over of the keys to the State took place on 1 August 1938.

The Princess of Orleans and Bourbon spent her remaining days in two palatial establishments (the Ritz and the Georges V) and her Paris apartment in Rue de Grenelle, where she died on 15 July 1943 at the age of 86.

Since February 2007, Domaine de Chaumont-sur-Loire has been owned by the Centre-Loire Valley region through decentralisation channels. 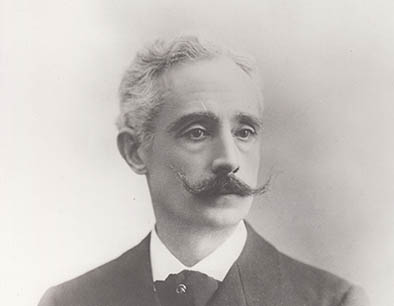 The son of Duke Jacques-Victor Albert de Broglie (1821-1901: President of the Council under Mac-Mahon in 1873 and again in 1877, and historian elected to the Académie française in 1862), Prince Henri-Amédée de Broglie (1849-1917) started out with the rank of major in a military career that lasted at least from 1875 to 1890. His wife complained continually about the absences his military career imposed on him, and it is more than likely that he ended up resigning at her insistence.
After leaving the army, Prince de Broglie showed a keen interest in the sciences and enjoyed attending to the many practical questions incumbent upon any great landowner, in his case managing an estate such as Chaumont-sur-Loire.
He drew up a programme comprising several stages:
From 1875 to 1900: the architect Paul-Ernest Sanson (1836-1918) restored and modernised the Château. Pretty much all stones in the Château walls showing signs of deterioration were removed, one after another, and replaced with new ones. In a letter to his son dated 3 October 1898, the Prince's father, the Duke de Broglie, wrote: "Another quality I admire is the genuinely artistic taste with which you have restored this ancient and beautiful residence of Chaumont, while doing nothing to mar its character. I should very much like this remarkable work appreciated by judges truly worthy of bearing witness to it; that would earn you, among artists, the reputation you deserve and which, as in all things, your modesty prevents you from seeking." In 1877, the same architect designed sumptuous stables, considered at the time to be the most modern and luxurious anywhere in Europe.
The second stage in these developments saw the Prince acquiring numerous plots of land. He began doing so in 1875, his job made easier by increasingly lower leases and the poor state the region's agriculture was in. As a result, the Estate's original 1,025 hectares had expanded to some 2,500 hectares by 1917, the year of Prince de Broglie's death.
He gave precedence to a sweeping drainage operation, determined to achieve his goal of making the lands profitable once more. He had the rocks that hindered the work of ploughing implements pulled out, small ditches that prevented the creation of large plots filled in, pastureland and neglected woodland cleared and created large plots to facilitate efficient and logical management.
The old marlpits awash with stagnant water were filled in and ponds laid out to provide water for game. Farm tracks were rerouted and restored and Prince de Broglie provided the municipalities in which his lands lay with an overall plan for improving country roads at his expense. A network of some 33 kilometres of pathways was created, along with six hunting lodges and seven farms.
The third stage, started in 1884, was the creation of landscaped grounds, designed by landscape architect Henri Duchêne (1841-1902) and containing such features as a water tower, dog cemetery and a rustic bridge.
Lastly, between 1903 and 1913, Prince de Broglie asked the architect Marcel Boille (1850-1942) to build a model farm (lodgings for the cattlemen and carters, a motor vehicle shed, donkey house, hangar for farming machinery and a pigsty for example) that was both modern and efficiently and logically designed. These works continued for ten years without ever being completed.
Prince Henri-Amédée de Broglie died at the age of 68 from bronchopneumonia. In a letter to his wife dated 6 November 1917, Jacques de Broglie (1878-1974) speaks of his feelings at his father's death: "The princess (Princess Amédée de Broglie) has lost all in losing my father, that kind and gentle model husband, he who devoted his whole life to her happiness and who truly only lived for her." The following Tuesday, on 13 November 1917, his body was transferred to Chaumont-sur-Loire and laid out in the Château's chapel, which had been turned into a chapel of rest, before being buried in the family vault in Chaumont-sur-Loire cemetery.